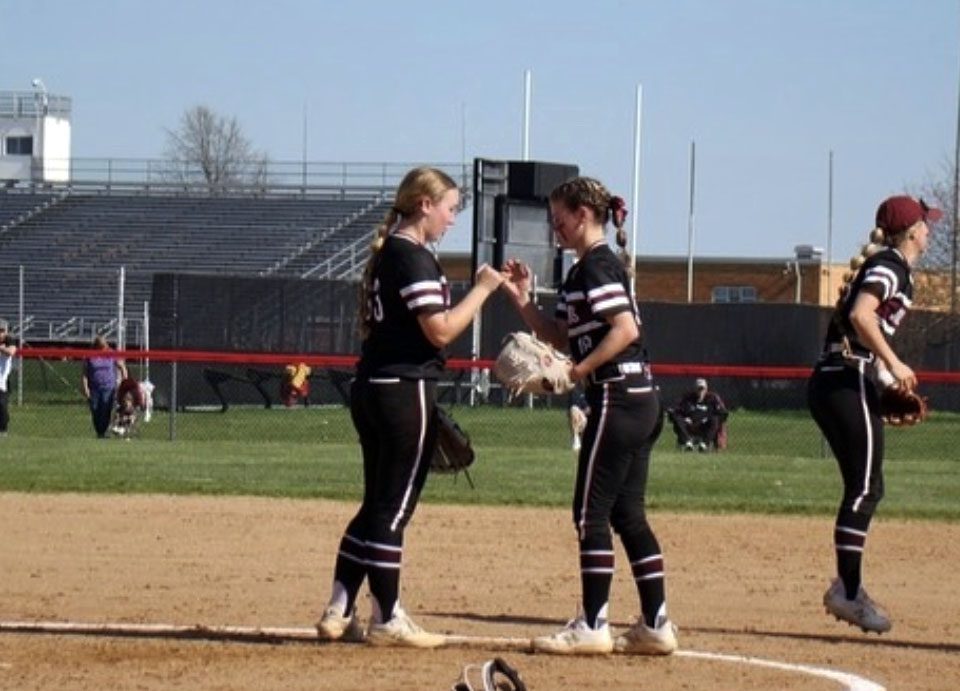 Appoquinimink softball doing a handsake at the mound, photo courtesy of apposoftball Instagram

We enter week six of the softball season with a little “shake up” at the top of the rankings.

No. 1 Appoquinimink (10-0) is the only unbeaten program in the Top 10 with wins over a solid Wilmington of Charter and #7 St. Mark’s. Savannah Laird recorded 24 strikeouts in the two wins and Hailey Watlington collected 5 hits total. Julia Weglarz ripped 3 doubles in the victory against the Spartans. As a team, the Jags pounded out 20 hits in the two games. Our new No. 1 will face HVT, Mount Pleasant & Concord this week.

No. 2 Caravel (8-1) suffered its 1st loss to Pennsbury, PA over the weekend. The Bucs have only one game scheduled this week against a very good Newark Charter team (6-3). The Patriots loss to Delmar has them just out of the rankings. Caravel picked up a win earlier Saturday over Mt. St. Dominic, NJ as Brooke Holdsworth went 2 for 4 with a double and Haley Grygo went 2 for 3 with 2 RBI’s.

No. 3 Sussex Central (9-2) falls one spot after Madge Layfield held No. 6 Middletown to one hit in a 4-0 shutout Saturday morning. Layfield threw 133 pitches in that game. Later in the day she pitched the 1st 4 innings against Laurel and held the Bulldogs to a single run, but she was pulled after throwing another 59 innings. Central ended up falling to Laurel in 8 innings 6-5. The Golden Knights face Lake Forest and No. 8 Caesar Rodney this week.

DMA (7-1) Holds on to No. 4 after dispatching No. 10 Delmar 9-7 and unranked Sussex Tech 8-1 last week. The Hawks win over the Wildcats featured back-to-back homers by Marissa Edevane and Sara Sobocinski in a 5 run second inning. Emily Trzonkowski pitched a 1-hitter in the victory over the Ravens. DMA has 3 road games this week at MOT Charter, Concord and No. 7 St. Marks.

No. 5 RLCA (7-1) hasn’t played a game since the 16th when they were involved in a “slugfest” against Sussex Tech in a 16-15 win. The Ravens had scored 9 times in the top of the 7th to surge ahead 15-13 only to see that lead disappear when the Lady Lions roared back with 3 in their half of the 7th for a “walk-off”. Red Lion’s offense was led by Morgan Lieske going 3 for 4 with a grand slam, solo home run, and a 2 run single. Followed by Maiti Meginniss going 4 for 5 with two doubles.

No. 6 Middletown (7-2) edged No. 8 Caesar Rodney 3-2 then fell to No. 3 Sussex Central 4-0 last week. Reese Founds was the winning pitcher for Middletown against CR. Founds went seven innings, allowing two runs on seven hits and striking out seven. In the loss to Layfield and Central, the Cavs could only muster one hit against “arguably” one of the best pitchers in the state. Middletown will face Delcastle, SGT and Charter of Wilmington this week.

No. 7 St. Mark’s (7-3) Went 1-1 last week as the Spartans blanked St. Elizabeth 12-0 and fell to undefeated Appo 6-3. Ryleigh Thomas and Carly Maxton combined on a 2-hitter in the win over the Vikings. Morgan Hall and Ryleigh Thomas led St Marks with 3 hits each.  Maddie Casapulla added 2 hits including her first HR. In the loss to No. 1 Appo, the Jags broke a 3-3 tie with three runs in the top of the 7th. Morgan Hall had two hits to lead the Spartans, a double and solo home run.

No. 8 Caesar Rodney (10-1) The Riders lost for the 1st time this season in a game streamed on Delaware Live last week, falling 3-2 to No. 6 Middletown. Peyton Shields was “special” in the circle, striking out 12 and no walks. The Riders rebounded with a close 1-0 win over Sussex Tech and a 15-2 victory against Charter of Wilmington. Shields struck out 13 and allowed only 2 hits against the Ravens. Stacy Deputy knocked in the only run of the game in the 1st inning. Deputy also was instrumental in the victory over Charter as she drove in four on three hits on a home run in the first, a single in the second, and a single in the third. CR faces Woodbridge and then meets No. 3 Sussex Central Thursday at home.

No. 9 Delmarva Christian (5-3) hasn’t played a game since the 14th. They’ve dropped a bit in the rankings. The Royals will meet 4-4 Dover Thursday.

No. 10 Delmar (4-4) The Wildcats hold onto the final spot in the Top 10 after a close 9-7 loss to No. 4 DMA and a win against unranked Seaford 7-2. Wins earlier over Newark Charter and Laurel, keeps Delmar ahead of those two for the final spot. The ‘Cats fought their way back from a 9-0 deficit against DMA but fell short. The offense was led by a 3 hit game from Jordyn Hollamon dishing out a double, triple, and 4 RBI’s. Zoey Coco and Ashlyn Tapman also recorded two hits in the game for the Wildcats. Those three also had good games at the plate in the win over the Blue Jays.  Delmar hits the road this week for games at Sussex Tech, IR and William Penn.

That’s it for this edition of “Inside The Circle”