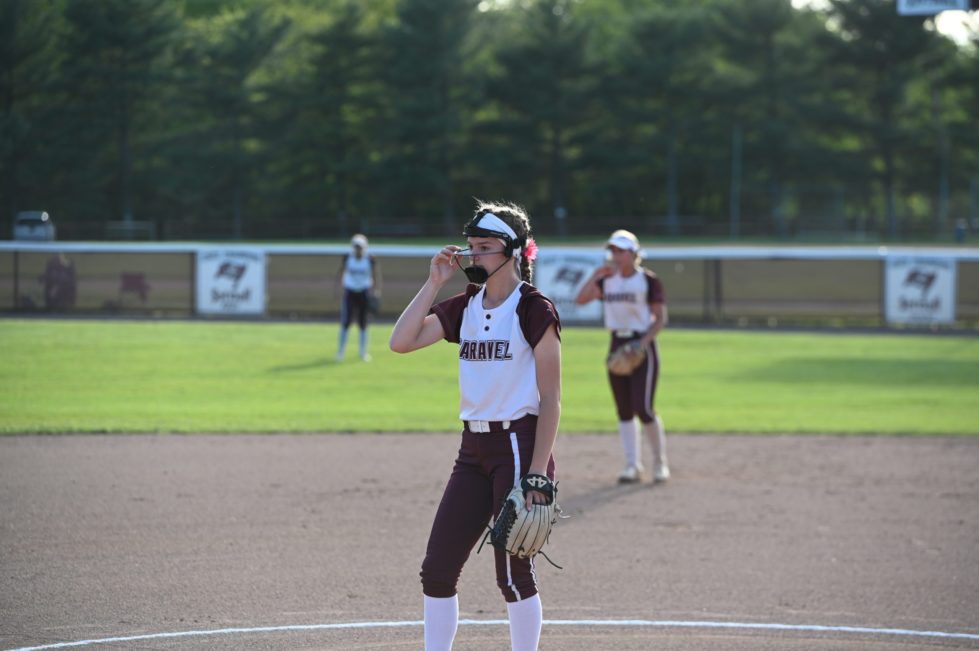 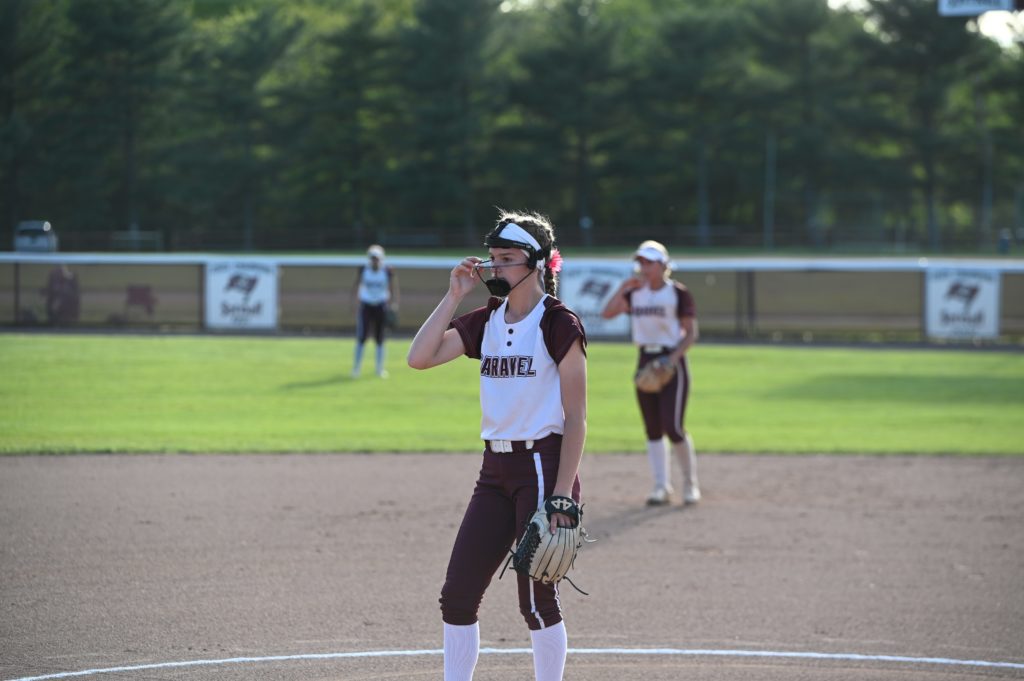 Kasey Xenidis on the mond for Caravel Softball, photo by Nick Halliday

The 24-team field was announced Sunday by the DIAA softball committee. The top 8 seeds receive a 1st round bye, while the remaining 16 teams begin play on Tuesday the 17th. Here are the seeds and a preview of what should be a very competitive tournament.

No. 1 Caravel (15-1) Coach Randy Johnson has the Buccaneers primed for another deep run in the playoffs, attempting to add a 12th program title, by far the most in the state. The defending champions only loss this season was to one of the top-ranked teams in Pennsylvania, Pennsbury. They have quality wins over #2 seed Appo (10-8), No. 5 seeded DMA 19-9, the 4th seed RLCA 10-0 and 10th seeded Delmarva Christian 6-0. The Bucs have good speed at the top of the lineup with Kendall Browne and reigning 1st team all state shortstop Veronica Diomede. Several players can hit with power, including Morgan Moxley, Brooke Holdsworth and Mikayla Walsh, while Coach Johnson relies on Brooklyn Richardson and Kasey Xenidis in the circle. The Bucs await the winner of the Delmar-Concord game in a 2nd round matchup on Thursday. Caravel beat both this season – a 13-1 win over Delmar and an 18-5 victory over the Raiders.

No. 2 Appo (16-2) The Jags started the season with 14 wins before falling 10-8 to Caravel and 1-0 to 7th seed Middletown in their final 4 games. Coach Brian Timpson’s team has quality wins over No. 4 RLCA 14-3, No. 5 DMA 8-0, No. 6 St. Mark’s 6-3, 5-1 over No. 9 William Penn, and 7-2 against No.10 Delmarva Christian. The Jaguars pitching is one of their strengths with Savannah Laird and freshman Ayla McCathern. Offensively, Appo is solid with Olivia Marinucci, Julia Weglarz, Hailey Watlington, Izabella Rodriguez, Lilly Papellas and Alexia Fitzgerald. Sky Eleazar has phenomenal speed and the “lefty” slapper will be a key in close, low-scoring games. The Jags will play the winner of the Indian River-Smyrna opening round game on Thursday at home. Appo beat the Indians early in the season 14-3, while they won a close 3-2 game against Smyrna last week.

No. 3 Sussex Central (15-3) The Golden Knights completed the regular season facing three teams seeded in the top 8. Central took care of No. 4 seed RLCA 13-8, and No. 6 seeded St. Mark’s 3-2, then fell to No. 5 DMA 7-3. Head coach John Wells has (arguably) one of the best pitchers in the state in Madge Layfield. They have plenty of fire-power to back Layfield in the form of Kate Evick, Kaylee Verosko, McKenna Boyle, Mya Jones, and others. The Golden Knights started the season with a 4-1 loss to No. 10 Delmarva Christian. They had a 6-game win streak snapped by No. 5 DMA last week. Their quality wins are 4-0 over No. 7 Middletown, 6-4 against No. 8 Caesar Rodney, and the two wins last week against RLCA, and St. Mark’s. Central will get a 2nd round home game against the winner of Conrad and Lake Forest. Sussex Central defeated Lake during the season but have not faced Conrad.

No. 4 RLCA (13-3) The Lady Lions had an 8-game win streak snapped last week with back-to-back losses to No. 1 Caravel and No. 3 Sussex Central. Their other loss came against No. 2 Appo earlier in the season. Coach Rich Edwards’ team has quality wins against No. 7 Middletown, No. 6 St. Mark’s and No. 9 William Penn. The engine that “runs the Lions train” is leadoff batter Peyton Pusey. She is one of the most versatile batters in the state with a mixture of power and speed. Handling the majority of the pitching is Angelina Edwards, while Alayna Griffing, Regan Mendick and several others are very capable with the bat. Red Lion awaits the winner of an opening round game between Henlopen South teams, Laurel and Milford. The Lions won in April 7-3 over Milford but have not faced Laurel.

No. 5 DMA (12-4) Delaware Military Academy started the season 10-2 losing only to No. 1 Caravel and No. 2 Appo, then lost 2 of 3 last week to No. 11 seed Charter of Wilmington and No. 8 Caesar Roney. The SeaHawks rebounded to knock off No. 3 Sussex Central 7-4 in the final game of the regular season at Midway. Coach Roman Allin has a special freshman pitcher in Emily Trzonkowski and a solid lineup from top-to-bottom featuring catcher Marissa Edevane, Sara Sobocinski, Alexandria Delcollo, Opalach, Henn, Downs and Wenzel. DMA will be the winner of the opening round game between Newark Charter and St. George’s Tech. The Hawks beat Charter 7-3 this season but did not face St. George’s.

No. 6 St. Mark’s (12-5) The Spartans losses all came to teams seeded in the top 8. Coach Jon Thomas has a solid pitcher in junior Ryleigh Thomas and a very capable Carly Maxton to back her up. Both Thomas and Maxton help lead the Spartan offense along with catcher Morgan Hall and others. St. Mark’s best wins came against No. 11 Charter of Wilmington and No. 14 Conrad. They will either face The Force again in the 2nd round or Cape Henlopen. The Vikings and Force meet in Wilmington in the opening round.

No. 7 Middletown (14-3) The Cavaliers have a “top-notch” pitcher in Reese Founds as she proved in a 1-0 shut-out win over Appo. Coach Nina Marcano has a good mixture of speed and power in her lineup. The Cavs’ speed was a key in a 3-2 win at Caesar Rodney this season. Keep an eye on the Hackett sisters (Jackie and Maddy) as well as Becca Maiorano, Summer Montgomery, and Kaylee Stenvick. Other than the wins against Appo and CR, the Cavs knocked off No. 6 St. Marks 4-2. The 3 losses came against RLCA 6-5, Sussex Central 4-0 and William Penn 3-2. Middletown awaits the opening round winner in a matchup of Archmere and No. 10 Delmarva Christian. The Cavaliers did not face either team this year.

No. 8 Caesar Rodney (16-2) The Riders are on a roll winning 5 straight and 8 of their last 9 games. The only loss in that stretch was 6-4 to No. 3 Sussex Central. Coach Skye Boris has (I believe) one of the most underrated pitchers in the state in Peyton Shields. Peyton is also one of the leaders on offense along with all-state catcher Stacey Deputy, and leadoff batter-shortstop Sydney Hatch. Hatch, and Lyric Abdul-Rasheed provide plenty of speed at the top of the order. CR has quality victories over No. 5 DMA 7-4, No. 9 William Penn 2-1, and No. 11 Charter of Wilmington 15-2. The Riders two losses were to Central and No. 7 MIddletown (3-2). The Riders will host a 2nd round game on Thursday against the winner of the William Penn – Brandywine game.

Those are the top eight seeds receiving a 1st round bye. There are some intriguing matchups in the opening round. Best of luck to all the schools, and for the honor of qualifying for this year’s tournament.