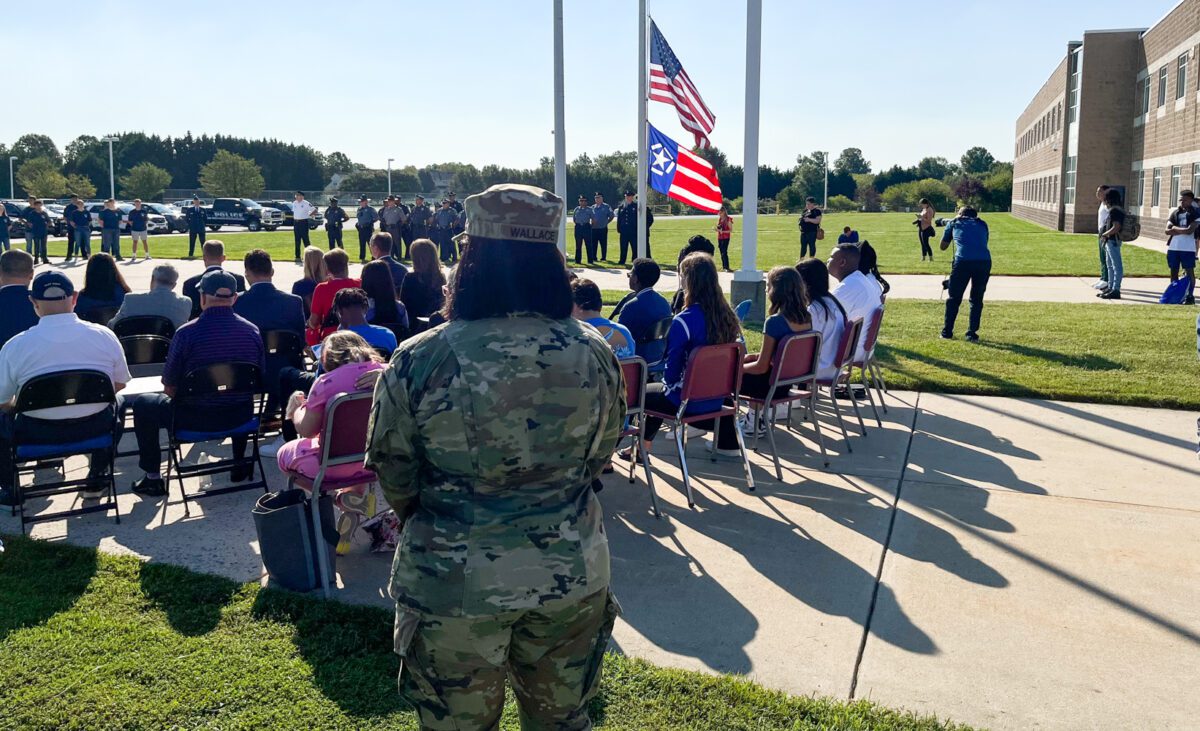 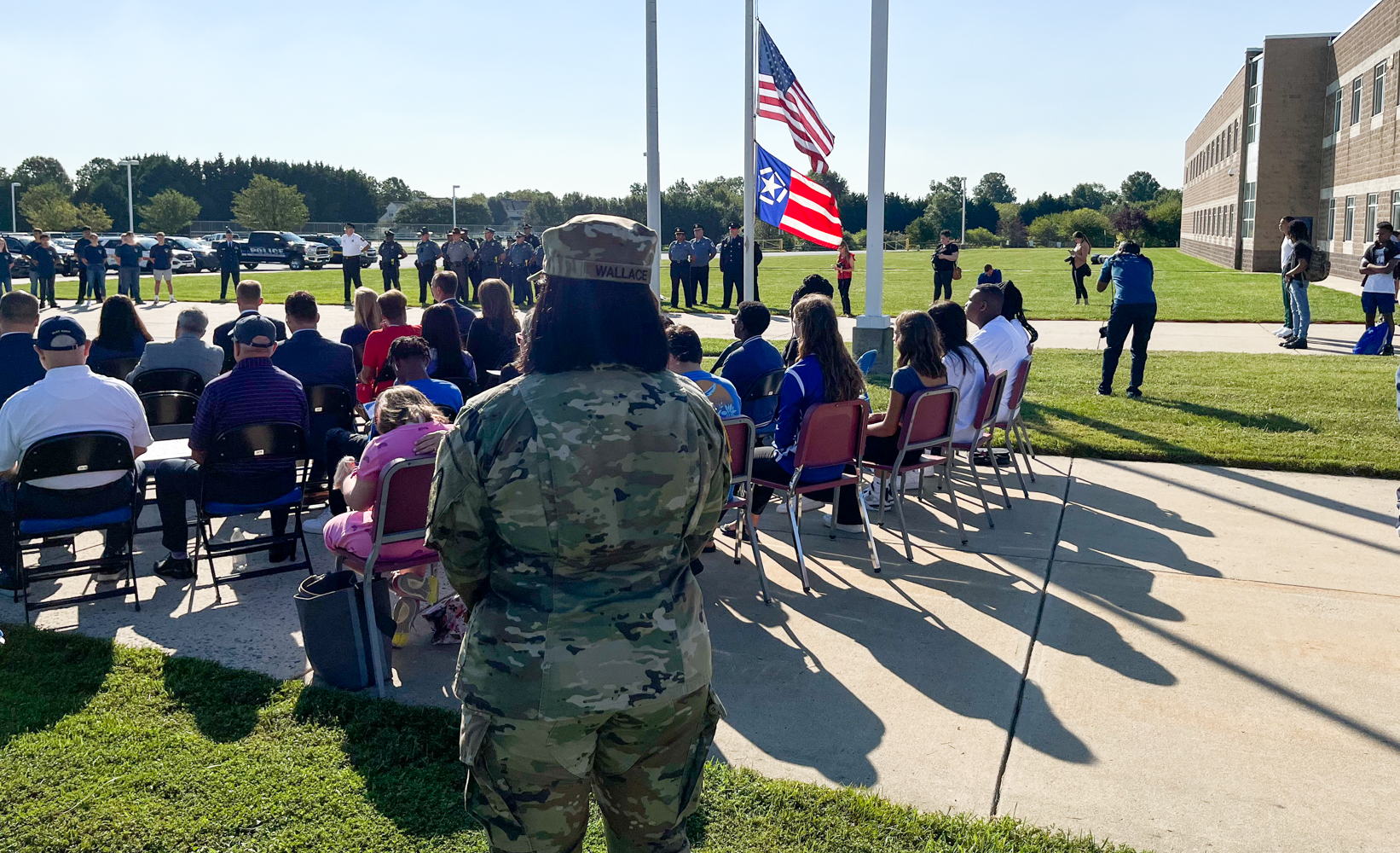 The somber trumpet notes of “Taps” rang outside of Middletown High School Friday, as the Appoquinimink School District held its annual 9/11 memorial ceremony.

About 200 members of the military, students and community members gathered to remember the nearly 3,000 people who died in the Sept. 11, 2001 terrorist attacks that killed people in the Pentagon, Twin Towers and a field in Pennsylvania.

Middletown High Senior Alison Lewis served as the ceremony’s trumpeter, playing the military anthem that dates back to the civil war.

“This was such an incredible honor,” Lewis said. “Both of my grandparents served in the military and in the Air Force, so it’s really a great opportunity to do something I love in a meaningful way to honor others.”

Her hands continued to shake 10 minutes after the performance from nerves and excitement. 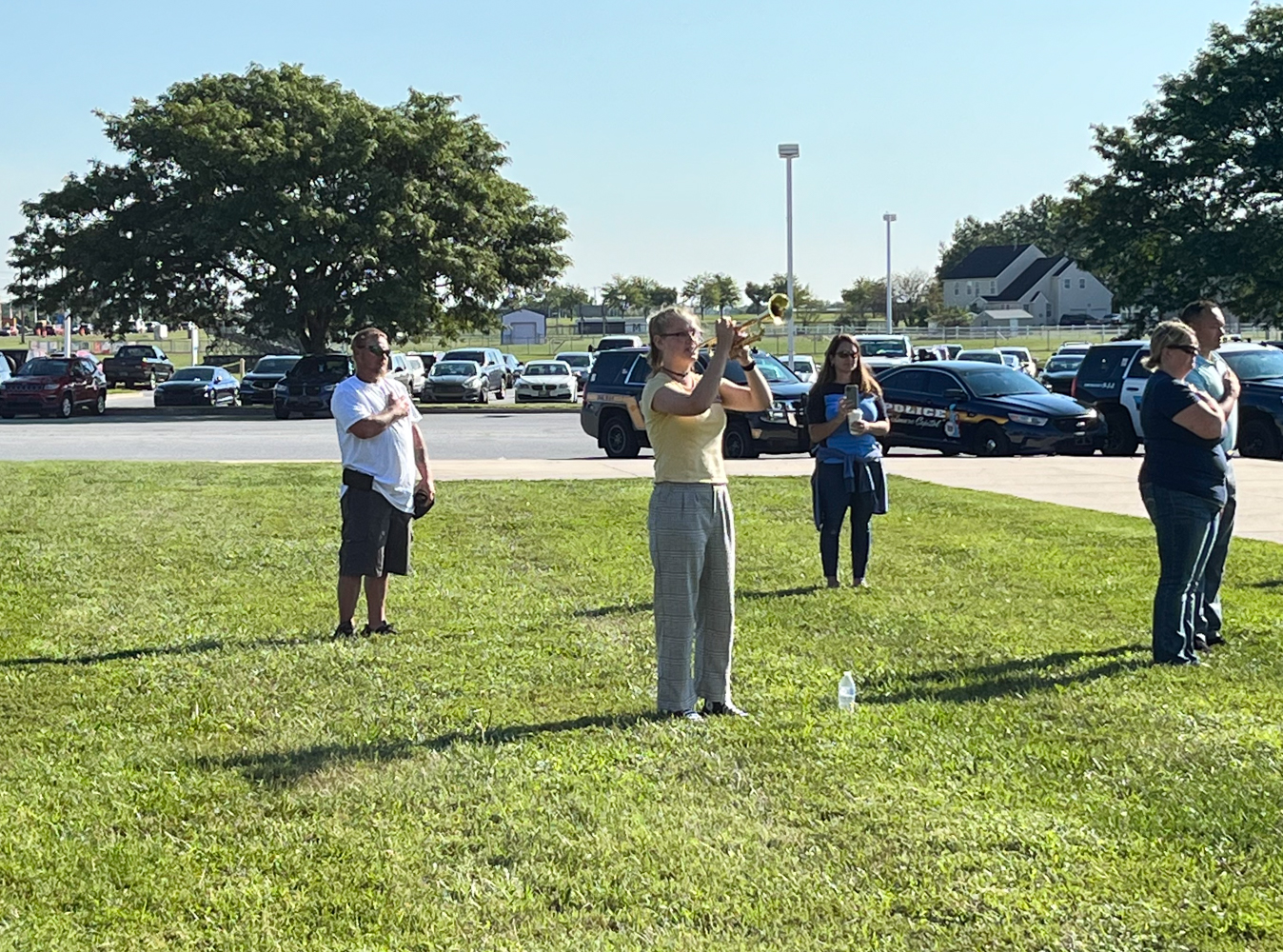 “Today’s ceremony helps us remember those who lost their lives not only in the crash, but the hundreds who risked their lives to save the victims,” Lewis said.

The ceremony included a 30-second moment of silence during which attendees bowed their heads in respect.

RELATED STORY: 9/11 in Delaware: 7 ways to honor those we lost

The morning also saw the raising of the 9/11 Remembrance Flag, which Appo was the first district in the state to adopt.

Since 2017, every Appo school has flown the flag, which is designed to contain several symbols.

While the ceremony was organized by Middletown High School’s Junior ROTC program, Master Sgt. Scott Saunders of Middletown Police Department said he wanted to make sure that officers from across the state showed out.

Saunders was an officer in Philadelphia during the attacks of 9/11. That day, he was on the job for over 15 hours. His unit was on high alert and not allowed to go home to their families.

“It was a shock, but it was a reality,” Saunders said. “As long as we’re going to keep our freedom safe, we have to be vigilant. We have to be proactive instead of reactive.”

The majority of attendees at the school were students who were not alive during 9/11, he noted.

“The kids need to hear from us,” he said. “As an officer who served that day, we need to teach them, because how else would that day resonate with them?”

The patriotic poem “Old Glory,” which personifies the American Flag, was read to the crowd.

Sweighgbe Ellison, a classmate and JROTC peer of Jones, said the ceremony was moving.

“We have to remember them,” he said. “All those who died and were impacted by that day cannot be forgotten.”