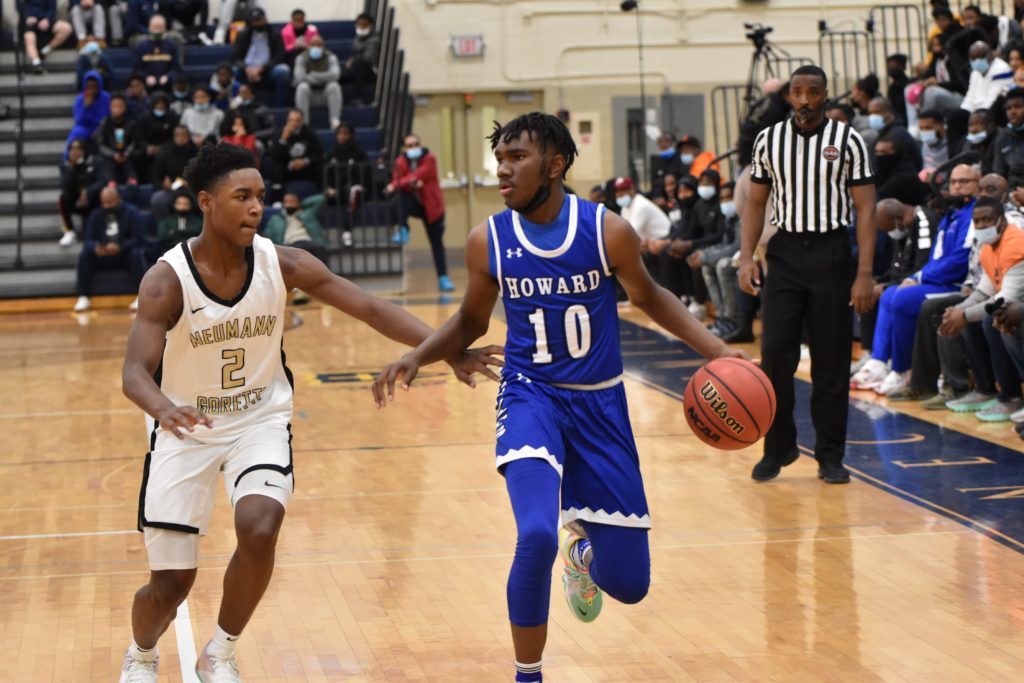 The Howard Wildcats boys’ basketball team hosted regional powerhouse Neumann Goretti this afternoon at Salesianum High School. The Saints traveled North to Delaware after securing a big win Saturday night in Arlington, VA beating Bishop O, Connell High School 72-70. Both teams came out with a ton of energy, full court pressing on every possession, forcing turnovers at both ends. The momentum seemed to be with Howard early as they secured multiple offensive rebounds leading to second chance opportunities. The Saint would clean up their play as the quarter continued, leading 12-11 after an exciting first eight minutes.

As the second quarter progressed, the Saints looked more and more uncertain as the Wildcat defensive pressure seemed to wear on the Goretti ball handlers. The Saints would weather the storm however and find themselves up 24-17 with 3:14 to go in the half relying heavily on the 3-point shooting of senior guard, Masud Stewart. Howard would come right back on the strength of their defensive intensity, forcing turnovers and  scoring 12 points in the last three minutes to tie the score 29-29 going into halftime. The intensity level on both ends of the court resulted in a highly entertaining half of basketball.

The second half started with the same intensity as both teams went on mini runs and looked like each were starting to pull away. The Saints once again relied on the strong inside play of 6’7 power forward, Sultan Adewale and the hot shooting of Stewart who sunk his sixth 3-pointer of the game at the 1:23 mark of the third. The Wildcats on the other hand received contributions from a number of players and continued to give Goretti trouble with their extended 2-3 zone. Howard appeared to slow down at the end of the quarter as Neumann Goretti finished the third up 53-45.

Howard bounced back strong at the start of the fourth, speeding up the Goretti ball handlers with a full court, zone press. The Saints would turn the ball over on their first two offensive possessions of the quarter leading to 4 Wildcat points, bringing them to within three. The Wildcat pressure continued to pay dividends deep into the quarter with the Cats trailing 64-62 with 1:08 to go. After one made free throw by Goretti, De’Mere Hollingsworth for Howard would come down a draining a 3-pointer from the wing to tie the game at 65 with 45 seconds left. Neither team was able to get off a quality shot in the last 45 seconds and after an amazingly entertaining 4 quarters of basketball, it was only fitting that overtime would be needed to decide this contest.

The success that the Wildcats had in regulation dwindled in overtime as Neumann Goretti stayed the course. The Saints attacked the basket and capitalized on Howard’s foul trouble making their free throws and patiently allowing the clock to wind down. Goretti secured a 77-72 victory in what will likely be looked back on as one of the best basketball games of the season played in Delaware. Masud Stewart led all scorers with 24 points for the Saints while the team effort by Howard earned the respect of fans and coaches alike.