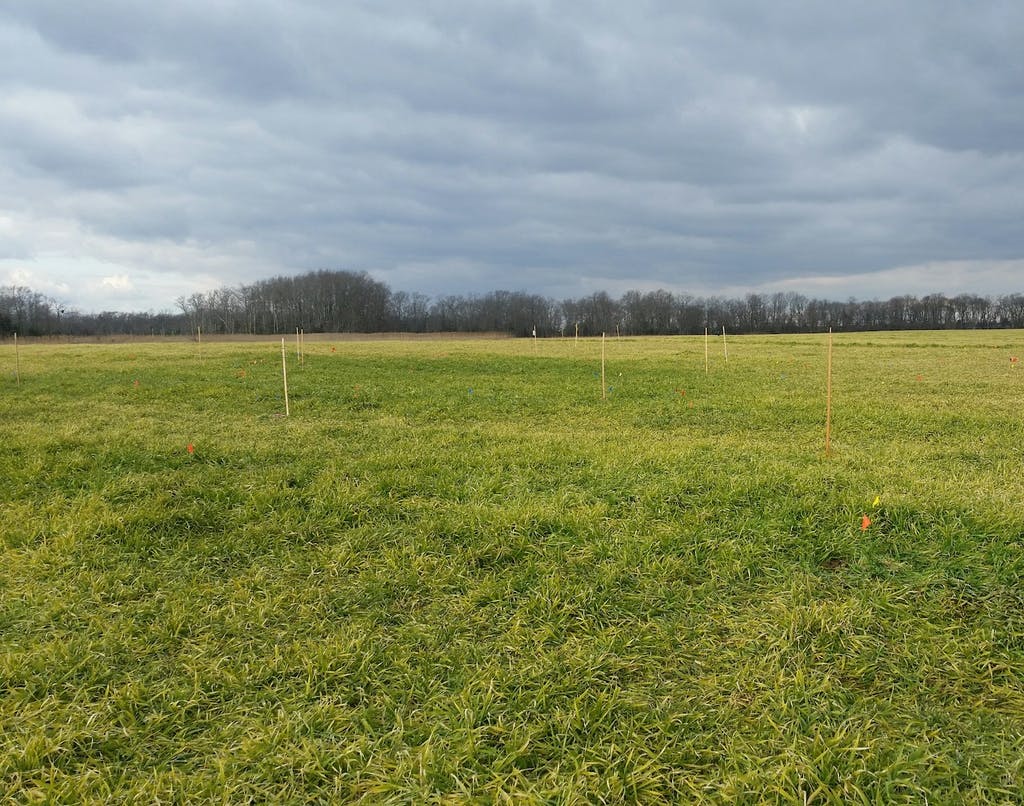 A field is staked out in the search for a burial ground at the John Dickinson Plantation. (Delaware Division of Historical and Cultural Affairs)

Archaeologist Wade Catts is thrilled by the just-announced discovery of a long-forgotten burial ground at the John Dickinson Plantation in Kent County.

“It’s a resurrection of a very important space, a space of remembrance and a sacred space. It’s very exciting to further a conversation with Delawareans,” he said.

“To hear from the descendant community will be an eye-opener. Nothing will make me happier than reuniting them with missing relatives.”

The Delaware Division of Historical and Cultural Affairs on Tuesday announced the discovery, following a search that began two years ago. Catts, as president at South River Heritage Consulting, coordinated the work for the state.

The ground could include up to 400 burials of enslaved people, indentured servants and tenant farmers.

“We had a moral obligation to find it,” said Tim Slavin, director of the division, “and if it existed, restore its dignity.”

One early step of that restoration occurred on Monday, when the state invited a group of Black ministers from the Dover area for a blessing.

Another is the state’s stance in keeping the exact location confidential until experts can properly protect it and develop sensitive interpretations that allow for visitors to “interact, grieve and memorialize,” Slavin said.

The burial ground “is an integral part of the site,” Catts said. “Many visitors see the grandeur and not see the hard work and the Black history behind it.”

Enslavement and related human rights issues are increasingly prominent issues at the plantation, the boyhood home of Dickinson, a signer of the U.S. Constitution. “Dickinson wrote eloquently about freedom and liberty while at the same time holding other human beings in bondage,” the state said in its announcement.

Work to find the burial ground began on paper, including an undated diary that referred to Dickinson’s father watching a funeral and federal documents from 1938 and 1950 that provided more, but frustratingly inadequate, details.

The search then moved to aerial photos going back to 1926. A rectangle of disturbed ground in farmed fields was promising, but it vanished, perhaps overgrown, by 1968. Ground-penetrating radar, shovel tests (small, explatory holes) and expanded open trenches followed.

Workers have so far found grave shafts, ceramic shards and a tobacco pipe stem, Slavin said, but no human remains. They have also found evidence of a well and structure nearby.

“Right now, we have more questions than answers,” he said.

Dickinson’s father in 1740 bought the property, which at one point included 5,000 acres. The National Society of the Colonial Dames of America bought the mansion and 12 acres in 1952 and donated it to the state, which grew the property to 450 acres two decades ago.