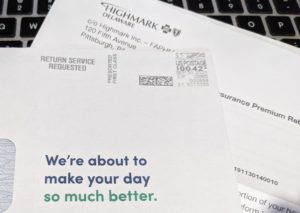 The check from Highmark Blue Cross Blue Shield Delaware is really in the mail. And it’s for a lot of money.

Highmark is rebating $12.1 million to individual Delawareans and those who buy small-group insurance, according to Delaware Insurance Commissioner Trinidad Navarro.

This is the second time in state history that rebates will go to participants of the individual Affordable Care Act marketplace.

“Employers can consider using these dollars to enhance benefits, reduce premiums for employees in future policy years, or provide refunds directly to group health plan participants,” Navarro suggested this year, repeating the same suggestion that he made in 2020.

The rebates exist because the marketplace requires insurers to spend at least 80% of premiums on policyholders’ healthcare services. “No more than 20% of premiums can be spent on administrative costs, such as salaries, sales and advertising,” Highmark wrote in the letter accompanying the check.

Navarro announced the scale of rebate on Aug. 31, and one letter received by a Highmark customer, dated Sept. 17 but received Oct. 4, says the rebates are due Sept. 30.

The rebates are calculated on a three-year average, Navarro said, adding that “policyholders’ decreased and delayed use of healthcare throughout the pandemic as something likely to necessitate future rebates.”

Highmark, the only general insurer in Delaware’s marketplace, will increase base rates an average of 3% for 2022, he announced earlier in August. That follows two consecutive years of rate decreases. Federal subsidies have cut consumer costs by 40% and will continue in 2022, he added