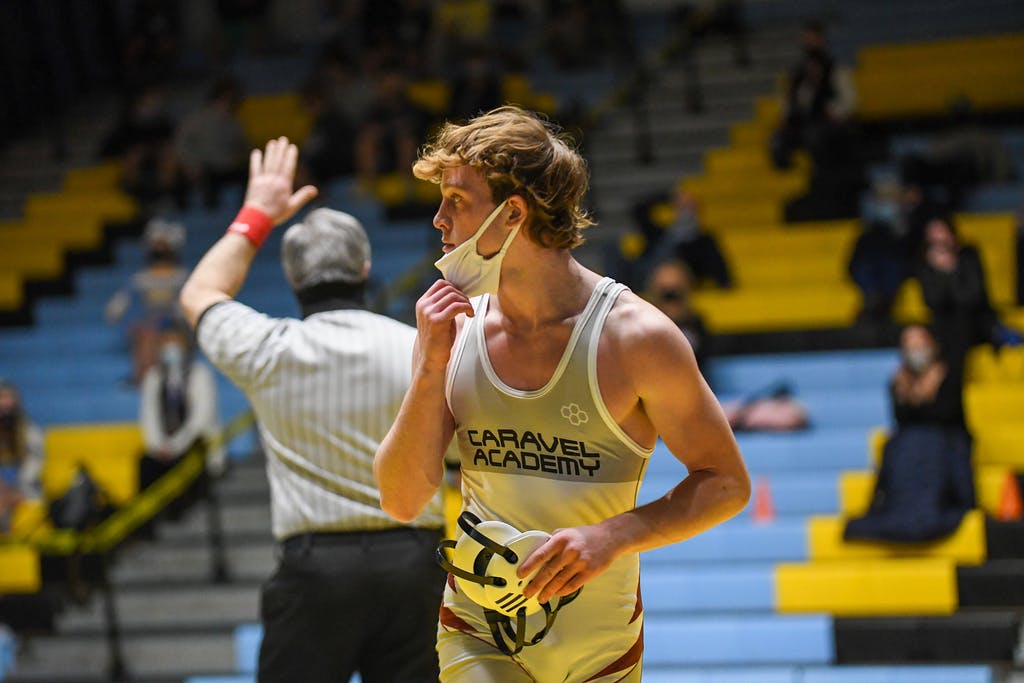 Two-time state champion Alex Poore of Caravel is the top seed in the 152-pound weight class.

Here’s a breakdown of the competition in each bracket.

Last year’s state runner up Chris Gandolfo (Salesianum) will come down from 113 for the first time this season and is the top seed and the favorite to win. We should see a semi final match up with returning state qualifier Jason Cruz (Middletown), but Gandolfo could get a challenge from Alex McEvoy (Caesar Rodney) in the quarters. Julian Rapuano (Delcastle) placed third in this weight last year and is expected to reach the semi final, but who he will meet there is a big question mark. Returning qualifier Tommy Murray (William Penn) is the three seed with Wyatt Miller (Smyrna) the sixth seed both are unbeaten on the season, but so is eighth grader Eddie Radecki (Caravel) the No.3 ranked wrestler at the end of the season.

Bracket Landmine: Eddie Radecki (Caravel) If Radecki comes in to Saturday with nothing to lose and a chip on his shoulder look from the seeding snub out for an upset.

Two-time state champ and top seeded Gabe Giampietro (Smyrna) has pinned or won by tech fall over all of his opponents this year and is unbeaten in the state throughout his career. Tyler Ratledge (Lake Forest) finished fifth last year and should meet Giampietro in the semi final. Returning state runner up Matthew Meadows (St Georges) has been out most of the season with an injury and returns for the state tournament and grabs the second seed. Marcello Ioannoni (Caravel) at the sixth seed could face eighth grader Trevor Copes (Milford) the three seed in the quarter finals. They are ranked  No. 3 and No. 2 respectively in the weight class.

Sleeper: Julian Campanelli (Tatnall) is coming in with no matches and has a first round bye.

Defending state champion Luke Poore (Caravel) is the top seed. M’Ja Smith (Caesar Rodney) and Dylan King (Sussex Central) will square off in the quarter finals. The bottom half of the bracket is filled with returning state place winners and qualifiers. Corey Messick (Milford) looks to return to the state finals after finishing third in 2020, but will have to get through the three seed Ian Shaubach (Indian River).

Bracket Landmine: Jack Engelmann (Salesianum) is going to be a tough out in the bottom of the bracket.

Sleeper: Keep your eyes on Qwantez Watkins (Smyrna) he is athletic and sitting at the seven seed.

Jack Thode (Milford) is a returning state champion and the top seed. Thode is a pinner which could help the Buccaneers in the chase for the team title. Daniel Williams (Delaware Military) and Connor Girard (Salesianum) should meet in the quarters for the chance to meet Thode in the semis. Dylan Knight (Caravel) was a state runner up to Thode in 2020 and seeded second while Cameron Cataldi (Caesar Rodney) is the three seed.

Bracket Landmine: Talan Savage (Sussex Central) has come on strong at the end of the season. 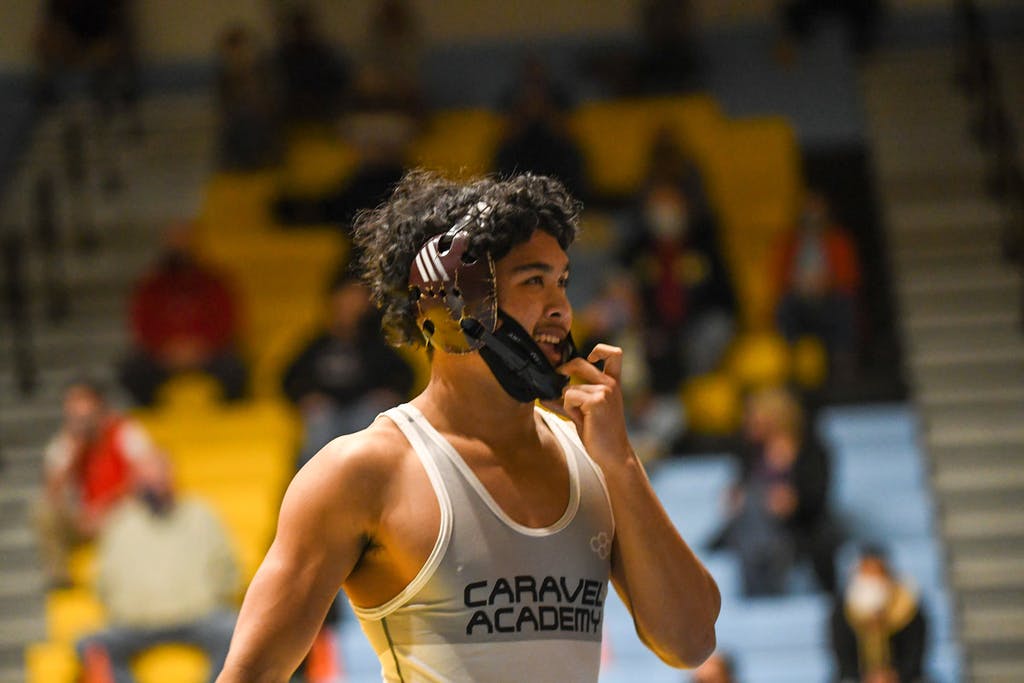 The 132-pound weight class may be the most exciting with two former state champions, including defending champ Ethan Gray of Caravel.

Another Milford Buc at the top of the bracket Trent Grant (Milford) was a state finalist last year. Michael Kling (Caravel) is unbeaten on the season and stands in the path of Grant returning to the finals. Daniel Sinclair (Willliam Penn) was a state qualifier last year, but moves up three weights this season is the three seed. Jamar Wells (Smyrna) was third a year ago, seeded second he will have to avenge his only loss of the season to Grant to win a state title.

Bracket Landmine: Carson Kist (Salesianum) could meet Wells in the second round who he lost to in overtime earlier in the season.

Sleeper: Cael Moyer (Lake Forest) has a tough first round match with Wells, but could do damage on the backside of the bracket.

Maybe the most exciting weight class with two former state champions in the bracket. Ethan Gray (Caravel) is a defending state champion and the top seed. His semi final opponent will be the winner of the Aaron Briscoe (Milford) – Abdullah Ahmad-Statts (Lake Forest) rematch from late in the season. Mason Ankrom (Sussex Central) was a state champion in 2018 and has an anticipated rematch with Mikey Frederick (Cape Henlopen) in the semi finals.

Bracket Landmine: This is a pretty balanced bracket, I don’t see anybody upsetting the apple cart.

Sleeper: Unseeded Liam Bush (Caesar Rodney) could surprise and find his way to the podium.

Sophomore Luke Bender (Cape Henlopen) has been impressive this season and has a pin over number two seed Drew Simpson (Delaware Military) in the last match of the season. Jonathan Carrion (St. Georges) will look to challenge Simpson in the bottom of the bracket.

Bracket Landmine: The crystal ball sees none in here.

Two-time state champion Alex Poore (Caravel) is the top seed at this weight. Josh Spence (Salesianum) and Cole Jester (Sussex Central) are the three and four seed respectively and should battle it out in the quarter finals. Unbeaten C. J. Fritchman (Cape Henlopen) moves up four weight classes this year and seeded number two. Expect a rematch between Fritchman and Tim O’Hara (Milford) in the semi final.

Bracket Landmine: The crystal ball sees none in here.

Sleeper: Cris Banks (Delmar) is lurking in the bracket in a good spot to pull an upset and get on the podium.

The weight class that Delaware wrestling fans are talking about. Two returning two time state champs in this bracket. Joey Natarcola (Smyrna) is a three time finalist winning titles that past two seasons and Nick Hall (Caravel) with two title of his own. Both have been dominant over the last three years and should meet for a much anticipated state finals match.

Bracket Landmine: Sorry folks, I don’t see anybody getting in the way of Natarcola and Hall.

Sleeper: Steven Novack (DMA) and Averi Copes (Milford) could go deep on the backside of the bracket.

Is the third time a charm for Justin Griffith (Sanford)? A two-time finalist he is the top seed this year. Sam DiTomasso (Newark Charter) is the four seed. Josh Malone (Appoquinimink) and Matt Duarte (Caravel) are the two and three seed respectively, but will face tough challenges in the quarter finals with D.J. Baker (Caesar Rodney) and Gabe Cannon (Sussex Central) on the bottom side of the bracket. This may be one of the most exciting weight classes of the tournament.

Bracket Landmine: Michael Elphick (Cape Henlopen) and Anthony Lucian (Tower Hill) a pair of transfers from Pennsylvania along with Nathan Lesniczak (Smyrna) could upset the seeding in this bracket and anyone or all of them could reach the semis.

Sleeper: In this weight don’t sleep on anyone. There is a lot of parity.

Josh Negron (Sussex Central) and Max Agresti (Salesianum) were ranked one and two all season, but the seeding criteria will have them facing off in the semi finals. Unbeaten at 160 this season Joey Jones (Newark Charter) makes the move up too challenge for a state title and is the two seed. He will have to deal with Dalton Deevey (Cape Henlopen) and Joeseph Pargoe (Red Lion) to get to the finals.

Danny Stradley (Caravel) is the favorite to win this bracket, but do not expect freshman James Miller (Salesianum) to give him a free pass to the finals. The bottom half of the bracket is crazy deep in talent with three seed Jackson Handlin (Cape Henlopen) and two seed Jacob Davis (Laurel) getting the nod in the seeding.

Bracket Landmine: Tyler Downward (Smyrna) and Shamar Nelson (Caesar Rodney) can be unpredictable but very athletic. Part of the depth in the bottom half of the bracket.

With three-time state champion in this weight Hugo Harp gone, the door at 220 opens wide. Nasir Dreuitt (William Penn) arrives as the front runner. He should face the winner of the Josh Dyer (Caesar Rodney) and John Palmer (St. Mark’s) quarter final. The Sanford Warriors would love to take a pair of state titles back home on Wednesday night and Jason Lamey (Sanford) gives them that chance as the two seed in this weight. Andre Green (St. Elizabeth) stands in the way seeded number three.

Two-time defending state champ Kevin Hudson (Caesar Rodney) returns to the top seed this year. A three-time finalist all at 285 Hudson is known to wrestle his best matches at the state tournament.  The bottom half of the bracket may end up being a game of bingo. Those seeding numbers may just get shaken up when the dust settles. T. J. Burke (Indian River) the two seed will face a tough Sunday night quarter final with Lucas Ruppert (Cape Henlopen) while three seed Brett Kwoka (Salesianum) will have to get through Seth Layfield (Sussex Tech).