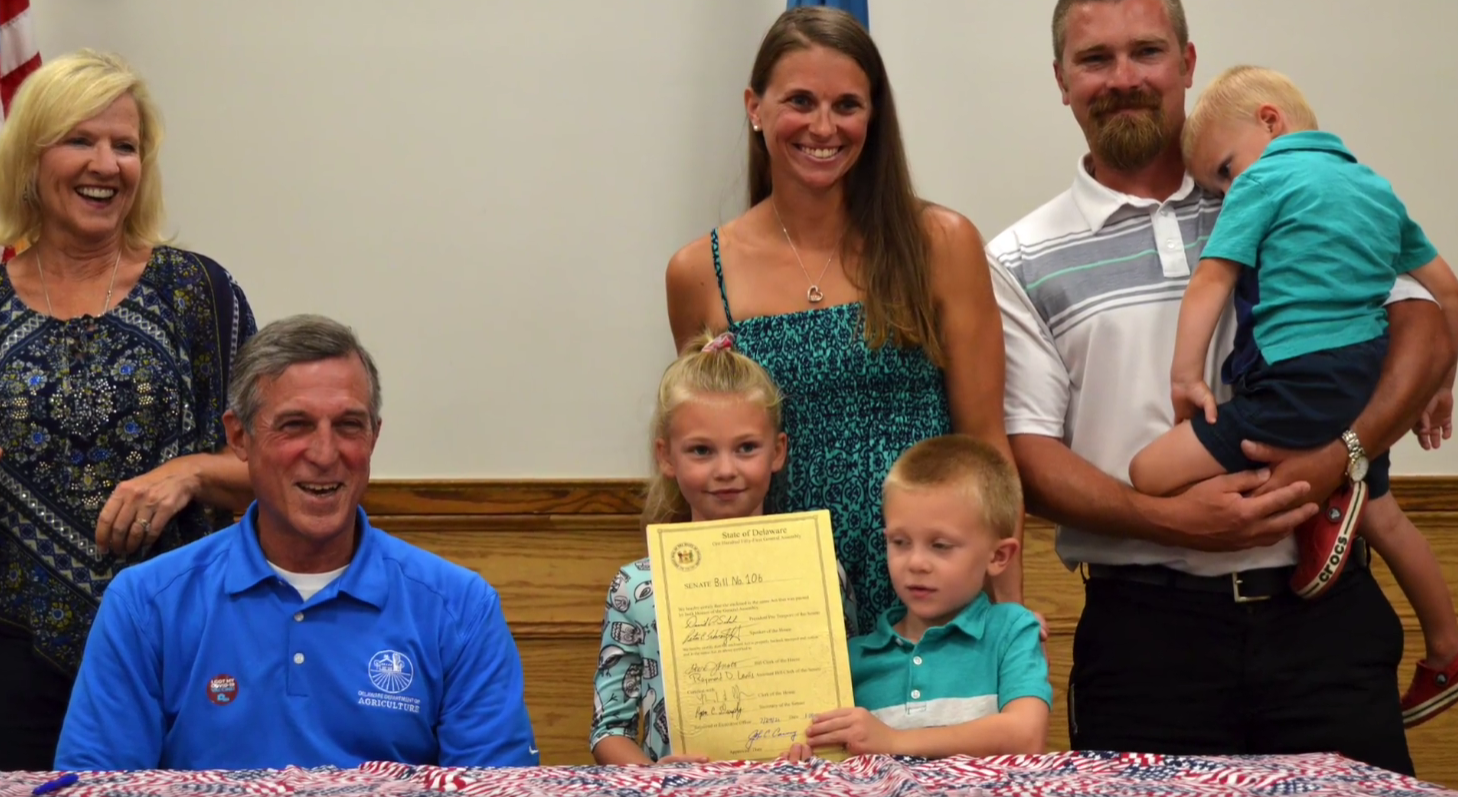 Three years ago, as their daughter was about to enter kindergarten, Megan and Buddy Willey learned young Caroline would no longer qualify for speech therapy through the school district.

The Bridgeville family homeschools their children, two of whom require the services of a speech pathologist.

State law allows all children to receive federally funded speech therapy through the public school system until they begin kindergarten, but once they do, only students who are enrolled in school qualify.

The Willeys didn’t know where to turn. Then they had an idea: Change the law.

On Thursday, the Willey’s idea came to fruition as Gov. John Carney signed Senate Bill 106 into law in an impromptu ceremony at the Delaware State Fair.

Just in the knick of time — their second child, Bud, who also requires speech therapy, is about to begin kindergarten.

“When our daughter, Caroline, was three years old, we noticed that she was having some speech delay so we had a speech therapist come and give her an assessment,” Megan Willey said.

It was a double blow when they found out Caroline would no longer qualify. Their oldest son, Bud, had picked up some of his sister’s speech tendencies and a speech therapist recommended services for him too.

Willey remembers asking Wilson, “Hey, did you know that this is the law? Private schools and charter schools can send their children to the school district to get those services, but homeschoolers in the district are denied those services.’”

“Well, that’s not right,” Wilson said. “You guys are taxpayers, too.”

“And that’s when our journey began,” said Willey. “I went up to Legislative Hall and spoke with the Senate Education Committee. I told them our story – that my daughter needed services and that she would not be able to have those services because she’s a homeschooler. I said her journey isn’t over yet.”

“She would just cry when someone didn’t understand her. It just broke your heart as a parent to see that, and I know that my little girl isn’t the only one out here like that.”

“They have made tremendous improvements just in a short amount of time. It does your heart good to see the confidence come back in your child. My daughter is just a social butterfly now.” Megan said. “She has a story to tell everybody and an imagination that just runs wild. To have something that potentially could have hindered that or taken that joyful little ray of sunshine spirit away from her – that was not an option. We couldn’t have that.”

“I’d like to thank all of them, especially for the bipartisan support,” Willey said. “It truly was a group effort.”

Willey said she hopes her family’s legislative victory will encourage others to work with their legislators to affect positive change.

“This is how it should be,” Willey said. “This is what being in politics is all about. You have a constituent who has a concern or an issue and you want to make it right. You want to do the right thing. I just brought this to their attention – I didn’t know what to expect. If I had never brought this to their attention, nothing would have ever changed. But hopefully this will be a testament and an encouragement to others to reach out to their legislators.”

Wilson, who sponsored the bill, said the disruptions caused by COVID-19 delayed his work, but that it was a bill that he “did not want to see dropped.”  He credited the Delaware Department of Education for “getting this train back on the track.”

“This is a day that I’ve been looking forward to for a long time,” Wilson said.

“This bill will give more options and flexibility for parents to choose how and where they want their children to be educated,” Vanderwende said.

Vanderwende credited Longhurst for her support in getting the bill passed in the House of Representatives.

Carney hailed SB 106’s grassroots origin story, saying “so much of the legislation that goes before the General Assembly starts from the people that each of us represent. It’s really special that constituents can approach their elected officials and really get things done and I know that’s how this bill started.”

Carney said the new law is evidence of “one of the great things about our little state — we consider all our folks neighbors.”