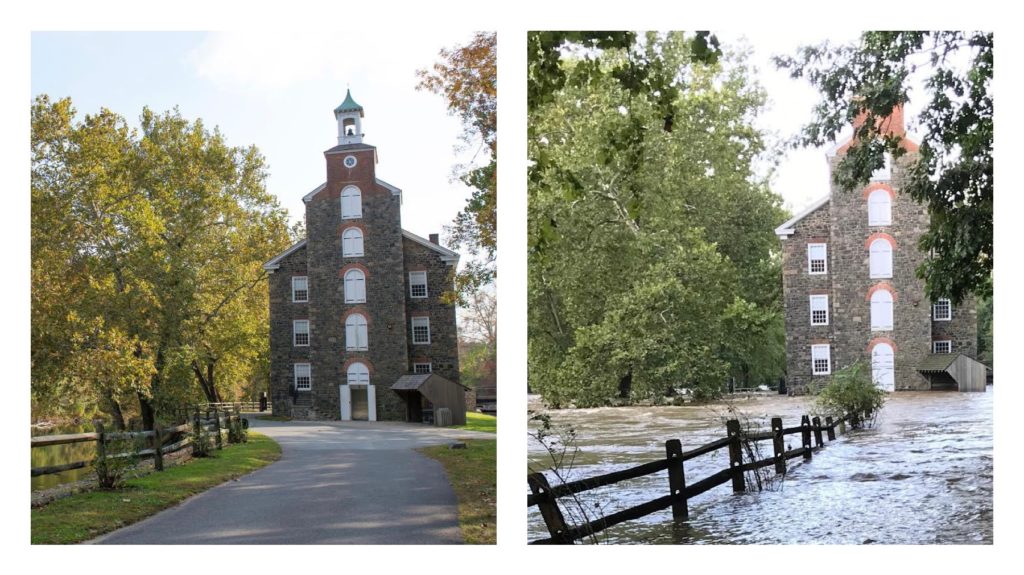 These two photos from Hagley show water halfway up the back door of the visitors center.

Damage to the lower property at Hagley Museum and Library  — a seminal piece of Delaware industrial history where DuPont manufactured gunpowder — may hit $2 million, according to CEO Jill MacKenzie.

Water overflowing the Brandywine River Sept. 2 after the remnants of Hurricane Ida came through scoured the property, knocked down walls and flooded all the buildings along the mill race down to Breck’s Mill.

Some of the worst damage came, though, after 8 feet of water filled the basement of the Visitors Center, which held the control units for many of the property’s systems such as electrical, a sewer pump, and heating and air conditioning.

“We’ve had a little bit of water get in but never at that level,” MacKenzie said. “There was 180,000 gallons of water down there that we had to pump out, and then get all of the stuff that was down there, which again was not collections, but it was our store inventory, and a lot of our educational supplies.”

Hagley does not have flood insurance because it cost so much, MacKenzie said. 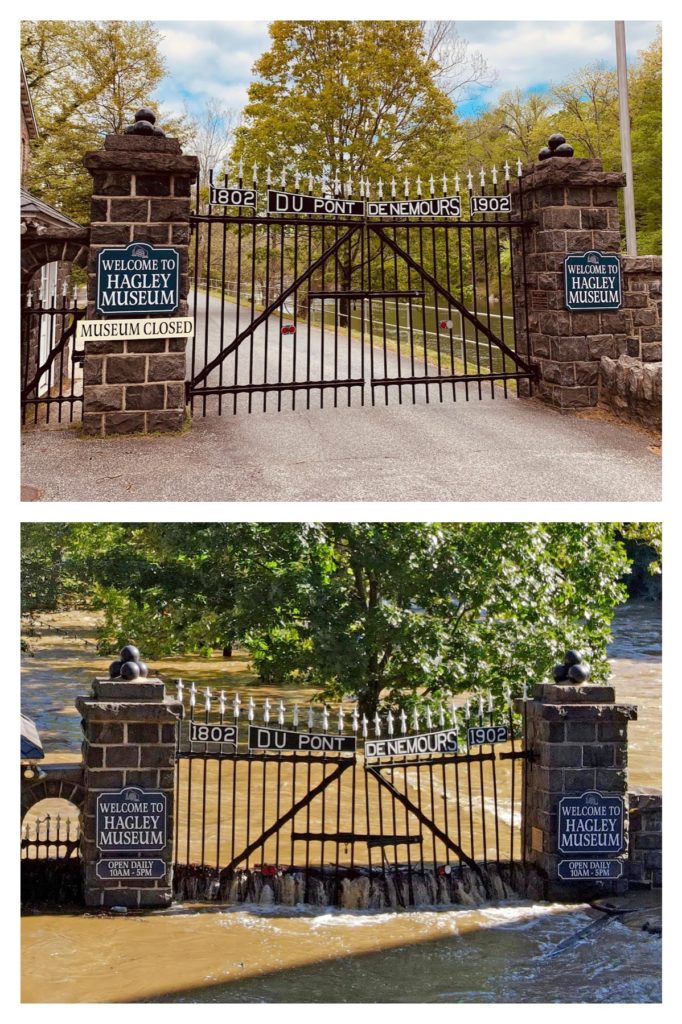 The waters also flooded the U.S. Post Office at Breck’s Mill and came up to the top of the steps on the second floor, where Somerville Manning Gallery is. The gallery has been forced to postpone its 40th anniversary show, according to a phone message at the gallery. MacKenzie said it has moved out of Breck’s Mill for the time being.

“We hope to welcome them back as soon as we can, but clearly she had to take the steps she had to, to be able to open that show,” MacKenzie said.

Hagley’s own new permanent exhibit, “Nation of Inventors,” was supposed to open Monday in the Visitors Center. It had a media preview in August.

“We were able to move all of the artifacts out of that building very quickly so everything was safeguarded and protected,” MacKenzie said. “They’re all back in their storage. We feel that our emergency response here at Hagley worked at 100%. Our folks did what they needed to do.”

“Nation of Inventors” now is tentatively expected to open in spring 2022. It’s possible it could have opened earlier, MacKenzie said, but that would have put it into the dead of winter, which isn’t know for encouraging high visitor interest.

“We have not set any deadlines at this point because we don’t want to,” MacKenzie said. “We don’t want to set an unrealistic deadline that we then feel that we have to meet.” 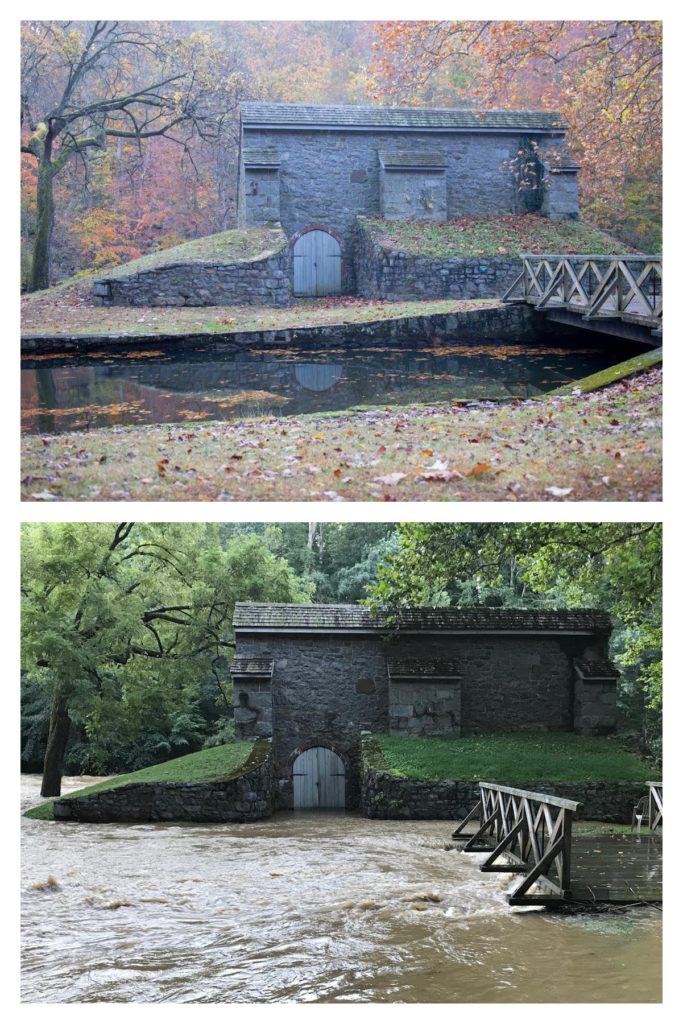 Hagley’s graining mill is among the many buildings flooded Sept. 2.

The former du Pont estate reopened to the public in a limited way last week, with reduced prices for a tour of upper property buildings, including the family home Eleutherian Mills, the garden and an exhibit of patent invention models in the library.

MacKenzie said Hagley officials aren’t yet sure exactly how much damages are going to cost.

They are estimating they will need several hundred thousand dollars worth of mortar work alone to repair and replace walls.

All of the utility systems in the basement of the Visitor Center must be replaced, she said. Hagley officials are starting to talk about putting the control systems in other areas instead of massing them together in the basement.

The narrow gauge railroad, on which a bright yellow railroad car usually sits, was destroyed. The car, often seen in the background of selfies and photos taken at the site, had been moved to a higher site after last year’s tornado, MacKenzie said.

The CEO said she was on the property the morning of the flooding, about two hours before waters crested. Water was flowing over the top of the head gates through the property and back out into the river, she said.

“You know, I look at the fact that all of our staff and all of our collections stayed safe,” she said. “I think that’s the biggest point I want to make. You know, we look at safety first here at Hagley, with that legacy of DuPont, so we feel tremendously lucky that everyone stayed safe, but our buildings and our grounds were not so lucky.”

The lower property still doesn’t have power, but gas-powered generators are being used to set up fans blowing air through the affected buildings to dry them. That will allow others to come in and  help evaluate so Hagley can decide what to do.

“We really feel the need to build this stronger for the future because, again, we are right along the river,” she said. “We are going to need to keep that in mind as we rebuild and reinforce the mills and reinforce the retaining walls, and potentially move systems.”