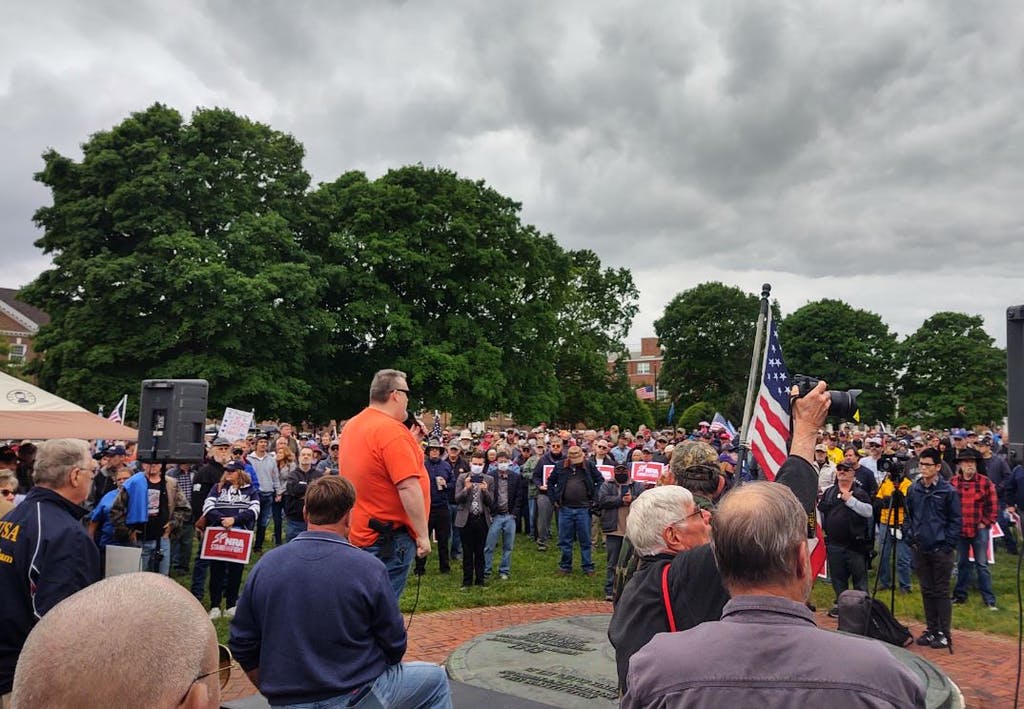 More than 1,000 people attended a Saturday rally on the Legislative Mall to advocate for gun rights in Delaware.

Attendees said it was the largest such rally they’ve seen since one in 2018.

“We’re making a difference today,” said Larry Pfieffer of Frederica. “Next one should be twice as many!”

“Whole families are out here today, and there are a lot of fresh faces here I’ve never seen. It’s quite impressive,” said Fred Smiga of Frederica.

Organized by the Delaware State Sportsmen’s Association, which coordinated with other Delaware gun rights activists and organizations, the even drew 15 speakers.

The focus of the crowd’s and speakers’ attention was two bills making their way through the Delaware General Assembly. Senate Bill 3 would require a permit and training before a person is allowed to buy a gun. Senate Bill 6 would make it illegal to buy, sell or own any gun magazine larger than 17 rounds and also require existing ones to be turned in for $10.

Kim Petters, president of the Women’s Defense Coalition, spoke at the rally.

“We saw that the only side that was speaking for women was Moms Demand Action, and we disagreed,” she said. “I decided to stand up and connect with other women to help our voice be known.”

She said she and others have been up and down the state, knocking on constituent doors in districts of legislators on the House Judiciary Committee, where Senate Bill 3 will be considered Tuesday, and sponsoring radio ads and hosting rallies in New Castle County to protest the bills.  Both bills have passed the Senate.

The magazine bill has been sent to the House floor, but hasn’t been scheduled in an agenda.

The rallies and voter outreach efforts have been successful, Petters said.

“Some of them didn’t even know these bills existed,” she said. “They didn’t know their legislators are supporting these bills and are 100% against them.”

Along with the sportsmen’s and women’s group, Delaware Gun Rights, Delaware Citizens for the Second Amendment and the Delaware 2A Rally sponsored the event. 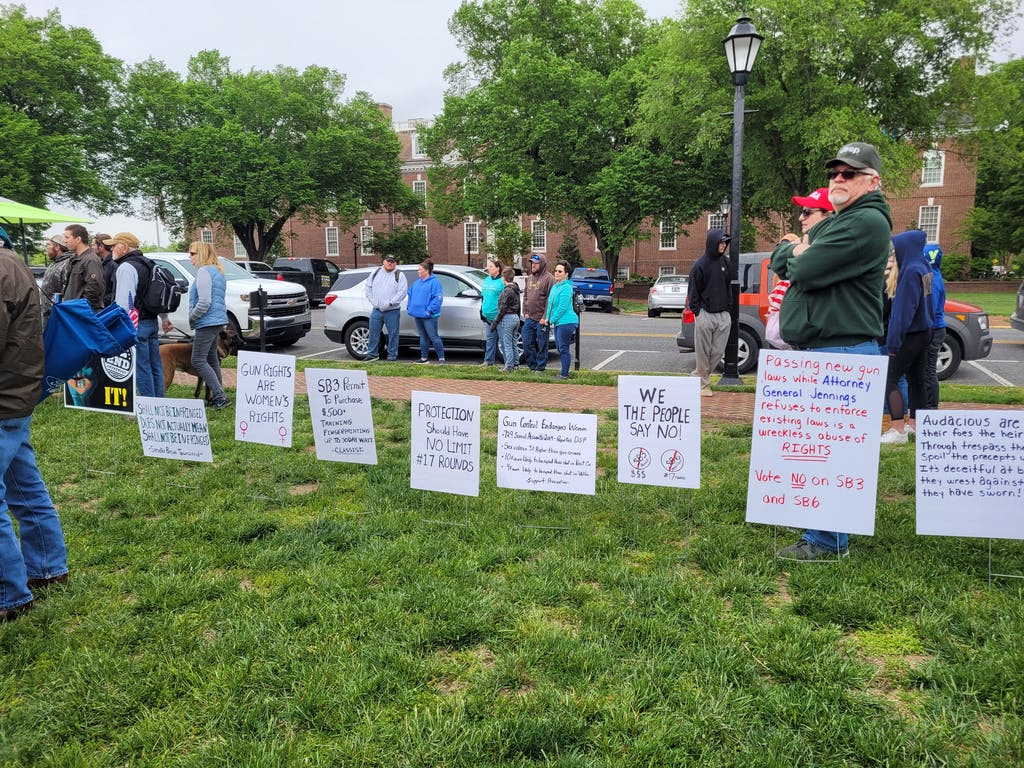 Jeff Hague, the president of the sportsmen’s association, said he had had enough after participating in committee hearings on the bills. While the committees have called people on both sides of the issue to testify, public comments have been limited to one- or two-minute statements, although all have been encouraged to send written statements to the committees.

“The lack of ability for the public to interact is really getting on my nerves,” he said. “The only way to get the message out to the people is to rally out here and meet.”

Mitch Denham, founder of the gun rights group, also said he was frustrated with the way public officials have handled the bills.

“They’re hiding on Zoom instead of doing the people’s work in the people’s House,” he said. “They don’t wanna hear us; they don’t want us to be a part of the voice. We expect to be railroaded.

That’s why, he said, “We’re out here letting them know that there are more people that are against what they are doing than for it.”

Denham said the gun culture and the Second Amendment are significant to Delaware’s history.

“The National Guard started with the Delaware militia,” he said. “We need to make sure that our rights stay intact.” 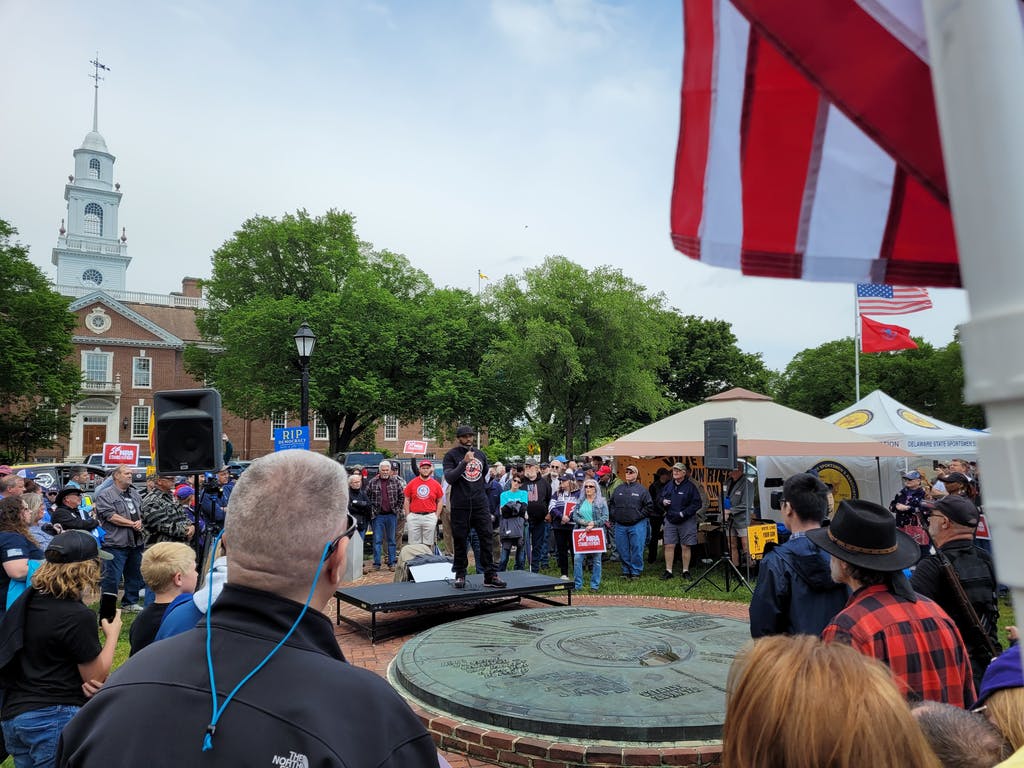 One reason the groups oppose Senate Bill 3 is that while it costs nothing to apply for a permit, it can be time-consuming and expensive to attend and pay for a firearms training course with certified instructors.

The training requires live-fire exercises with a minimum of 100 rounds, and the process would also require fingerprints from the Delaware Department of Homeland Security, and an addditional state background check in addition to the federally one already required for a purchase of a firearm.

Critics estimate that this process will cost at least $400. However, many expect this to escalate with the higher demand for mandatory training.

While the class is good for two years, the purchaser card is only valid for 180 days. During the 180, that permit own could buy multiple guns, but when it expired, the process must be completed and cost must be incurred every time an application is submitted for a new card, the opponents said.

“All these processes will put an undue amount of cost on the poor and vulnerable, who need their protection the most,” said Denham.

Among objections to Senate Bill 6 is the language in the bill that states any firearm that has a removable floor plate, where an extended magazine attachment could be added, also is illegal.

“They snuck verbiage in there that will ban every gun with this magazine bill,” Denham said.

“They will effectively ban almost every gun in the state,” said Hague. 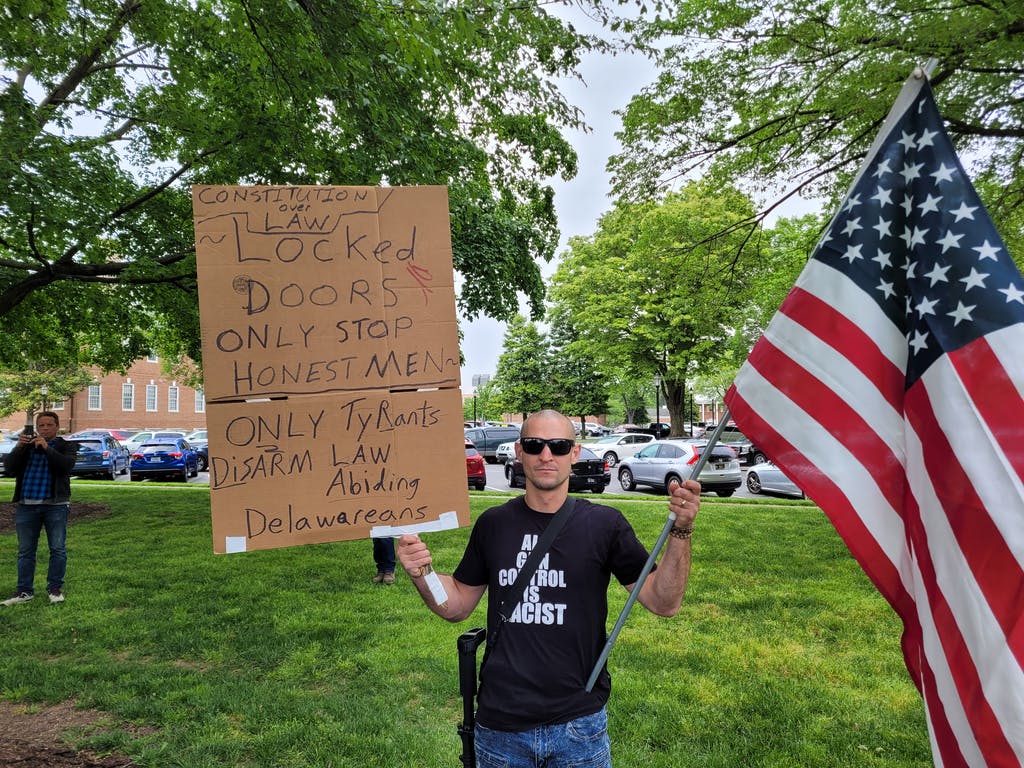 “It can’t be allowed to happen,” said Sen. Dave Lawson, R-Marydel, who spoke at the rally. “I’m glad that the people came out. We have to stand as a united voice, so folks know we are serious.”

“They think they can just legislate rights away, but I don’t think that’s going to happen,” said Rep. Charles Postles, R-Milford. “The people won’t stand for it.”

“Politics is difficult to predict,” Hague said, “but I can promise you that I am doing my best to prevent it from being enacted, and if it gets passed, you can be sure that we are going to take them to court.”

He sites Article 1, Section 20 of the Delaware Constitution, which states “a person has the right to keep and bear arms for the defense of self, family, home and State, and for hunting and recreational use.”