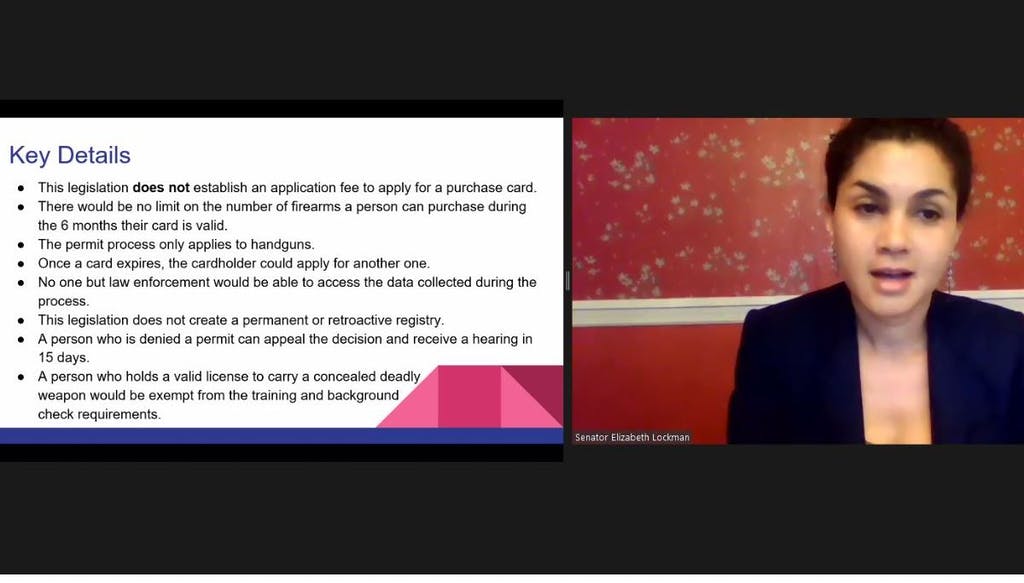 The state will find out Thursday evening if the Delaware Senate will corral enough members to OK bills that would require a permit, training and fingerprints to own a handgun in Delaware and and would ban gun magazines that held more than 17 rounds.

Both moved out of the Senate Judiciary Committee Wednesday to the Senate floor, where they will be debated Thursday afternoon. Because state money is attached to both bills, they were then “walked” through the Senate Finance Committee with no public hearing but approved with signatures on the back so it could be debated at 2 p.m. Thursday by the full Senate.

Sen. Dave Lawson, R-Marydel, who is a member of both the committees and outspoken opponent of the bills, attended the Judiciary meeting, but said he was not contacted about signing the bill as a member of the Financial committee. The bill summary said it passed with three favorable votes and one unfavorable.

“I’m just very disappointed in the ram-it-through mentality that is going on without a fair representation of what the people themselves testified to today,” Lawson said. “It was overwhelmingly against the bills, but they ignored that. If they represent the public, they should be representing the public. We are not doing that.”

Jesse Chadderdon, chief of staff for the Senate Democratic Caucus,  sent an email at 8:47 p.m. that included a copy of an email that was sent out to members of the Finance Committee at 4:04 p.m. and included Lawson.

“He is correct,” Lawson said after looking at a texted copy of it. “This email did go out but after we were in session. There was NO committee hearing. It asked for votes on the bills without discussion or any type of transparency with the public. I did not get this email until well after session.”

Senate President Pro Tempore Dave Sokola said in a statement emailed by Chadderdon that nothing Lawson said was new.

“Republicans have long opposed common-sense reforms to Delaware’s gun laws that are supported by 7 in 10 Delawareans,” he said. “They’ve long cried foul over legislative proposals that have been deemed constitutional by court after court after court. … What is new is that Delawareans have elected five gun-sense candidates to the Delaware State Senate over the last two cycles. What is new is that there are no longer the votes in the Chamber to block this legislation.”

Sokola also said that Lawson is taking aim at process because he could not thwart programs, “a process outlined in the very Senate rules members of both caucuses voted to support in January and one that has already been deployed this legislative session without objection.”

Both gun bills were already listed on Thursday’s Senate agenda before the hearing even began.

After mass shootings in Atlanta and Boulder, Colo., sponsors Sen. Elizabeth Lockman and Sen. Dave Sokola on Tuesday night issued a joint statement saying the bills were urgent to protect the public. The legislators said they were providing fair notice that the two bills would be considered at 2 p.m. Thursday by the full Senate if they were released from committee, but didn’t name the committee. The bills were on the Judiciary Committee’s agenda, and there was no Senate Finance Committee meeting scheduled Wednesday.

Having the bills on the full Senate agenda also was a sign that the Democratic-controlled Senate leaders knew the Judiciary’s Committee’s four Democrats would handily move the bill along despite opposition from the two Republican members.

And they did, even though the livestreamed hearing ended without a public vote. As the Senate routinely does, members were asked to email their votes, and the public had to wait and watch the Delaware General Assembly website to find out what happened

Sens. Kyle Evans Gay, Sarah McBride and Bryan Townsend voted yes, and Sen. Darius Brown voted to release the bill on its merits, a way of letting the bill be debated without formally ticking the yes column. Lawson and Sen. Brian Pettyjohn voted no.

Gun control measures are not new to the Delaware General Assembly. Democrats have wanted to enact gun control bills for years, but attempts to do that in 2019 failed when a Delaware gun rights group joined forces with union members to threaten political finances. Several Democrats didn’t support the gun measures, and even Gov. John Carney backed away from them.

Since then, some Republicans and center-left Democrats were voted out of office and replaced with progressive Democrats, many of whom included passing gun control bills among their campaign platforms.

The 2020 election also gave Democrats have a supermajority in the Senate, meaning they can pass any bill they want without a Republican vote, if the Democrats vote together.

The Judiciary committee’s tightly controlled, technically challenged virtual hearing devoted much of its two hours to public comments, most of which were in opposition.

Judiciary Committee chairman Brown, D-Wilmington, said that 700 people were online and told listeners they would not be able to get everybody who wanted to speak. He gave speakers one minute to state their opinion. When that minute was up, the speaker was disconnected.

Twelve addressed Sen. Dave Sokola’s Senate Bill 6, which limits the sales of gun magazines and sets up a magazine buy-back program at $10 each, although some commenters had trouble connecting and didn’t get to testify. About 30 talked about Sen. Elizabeth Lockman’s Senate Bill 3, which called for a permit, training and fingerprinting, before Brown shut the meeting down at the two-hour mark.

“In all honesty, the whole process is a disgrace to the American people,” said Mitch Denham of Delaware Gun Rights, the group that helped plow under previous gun bills, after the hearing. “The idea that this suffices as a public comment is beyond reprehensible.”

He pointed out that representatives of the National Rifle Association and National Shooting Sports Foundation couldn’t get their microphones to work with the state’s Zoom call.

Denham and others focused on the hundreds of dollars they said the permit and training would add to the cost of a gun.

“Any right that has a cost attached to it no longer becomes a right and becomes a privilege.” Denham said. “We’re not talking about it’s 20 bucks and you’re good. We’re talking about hundreds of dollars, and it’s going to affect the people below the poverty line the most. Guess where they all live? Inside the city where it’s dangerous. So you’re literally telling poor people they don’t deserve the right to protect themselves.”

Chadderton said the idea that the virtual hearing lacked transparency is laughable.

“The length of today’s Judiciary Hearing was doubled due to public interest, and nearly 900 people joined,” he said. “That’s more than 10 times the number of people that can fit into any single hearing room at Legislative Hall.”

Supporters said several studies clearly said permits and magazine bans worked; shootings involving high-capacity magazines are more deadly; permitting will help stop people from buying a gun for someone else; shooters can be tackled and stopped when they have to reload; Delaware is in the grip of a gun violence epidemic; the bills were modeled on others that had passed constitutional tests; parents want the bills to protect their children and families from gun violence; most people are in favor of gun control and a passionate minority oppose it; having a permit will slow down a mentally ill person’s ability to buy a gun to hurt someone else or themselves.

Those opposing the bills said the studies cited were done by those supporting gun control; the bills were unconstitutional, specifically in Delaware where the Constitution offers broader protections than the U.S.;  the permit bill violates equal protection rules because it sets up one class of people who must have a permit but allows police officers and military to skip that; are tantamount to discrimination because permits and training could generate hundreds in fees that could prevent lower-income people from buying a gun; will result in the deaths of people under threat who must wait for a permit to be processed; the bills will cost more than the financial statements say they will; the state could some day decide to slow gun sales by slowing the permit process through reducing the number of workers devoted to clearing permits; and criminals don’t buy guns in a shop, so the bills won’t catch criminals.

Rob Petree contributed to this report.