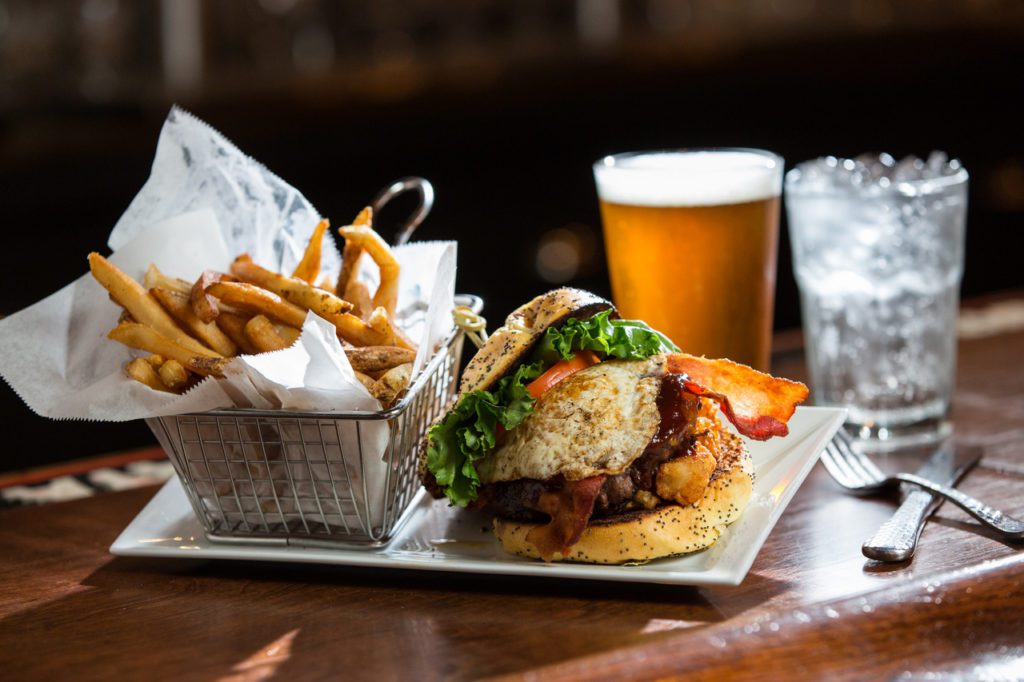 Grain’s Hangover Helper Burger will be on the Trolley menu. Photo by Matt Urban

It is easy to understand the appeal. The space at 1709 Delaware Ave. is the former Scratch Magoo’s, which operated for 29 years in the heart of Delaware’s nightlife scene.

When Grain hopefully opens by St. Patrick’s Day, it will be yet another example of the partners’ ability to “go with the grain,” both in an existing space and an established community.

An eye for opportunity

The idea for O’Donoghue and Mikles’ business was born around a neighborhood firepit in Hockessin. The neighbors often talked about owning a restaurant. At the time, O’Donoghue was in banking, and Mikles was in marketing.

The friends dreamed of an establishment that would cater to both adults and families, with good beer, fun and casual food and activities, such as live music.

In 2015, space became available on Main Street in Newark. Not only was it on the college town’s primary artery, but it had parking. The men didn’t hesitate; Grain Craft Bar + Kitchen opened in July. 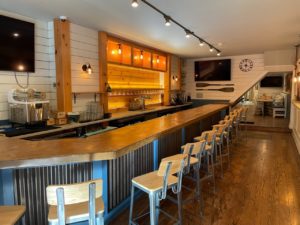 This will be the bar area of Grain Trolley when it opens around St. Patrick’s Day. 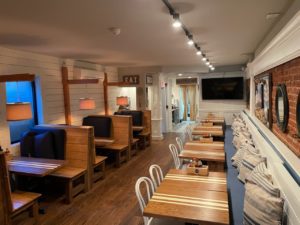 While the partners always planned to expand, they didn’t imagine they’d be opening two new places in one month. In 2017, Grain H2O debuted in the former Aqua Sol at Summit North Marina in Bear, Delaware, and Grain Craft Bar + Kitchen opened in downtown Kennett Square, Pennsylvania.

The sites were too good to pass up, and an opportunity came knocking again with Grain on the Rocks in the Cape May-Lewes Ferry terminal in Lewes.

So, you can understand why they jumped on the Trolley Square vacancy.

“It all came about very quickly,” O’Donoghue agreed.

Different yet the same

With so many diverse locations and buildings, Grain is not a cookie-cutter concept, and slight tweaks to the name reflect that approach. For example, a Grain restaurant on the University of Delaware’s STAR Campus will be called Grain Exchange.

“Personally, I like how our places take on the character of the neighborhood we move into,” Mikles said.

But it’s not always simple to accomplish.

“It’s a bigger challenge to fit the concept into what the building gives you — or doesn’t give you,” he said.

Grain’s crab nachos will appear on the Trolley menu. Photo by Matt Urban.

Grain’s cheesesteaks will be on the Trolley location’s menu.

Bloody Marys lined up all in a row for brunch lovers.

Big Fish, which remains the landlord, did an excellent job of renovating the old Scratch Magoo site for Bar Roja, the men agreed.

“They spent a lot of money on the patio, which looks awesome,” O’Donoghue said.

However, the kitchen is tiny, which has prompted corporate chef Bill Wallen to whittle down the typical Grain menu.

And, eventually, they will have a commissary at the STAR site that can prep items such as the fried pickles in advance and deliver them to Wilmington.

The opening of that location, however, has been delayed due to supply chain issues. But when complete, it will be a full-service Grain restaurant with an adjacent coffee shop.

The partners see the bulk of the STAR business occurring between 7 a.m. and 7 p.m., but based on the surrounding community’s interest in the project, the hours will expand into the evening.