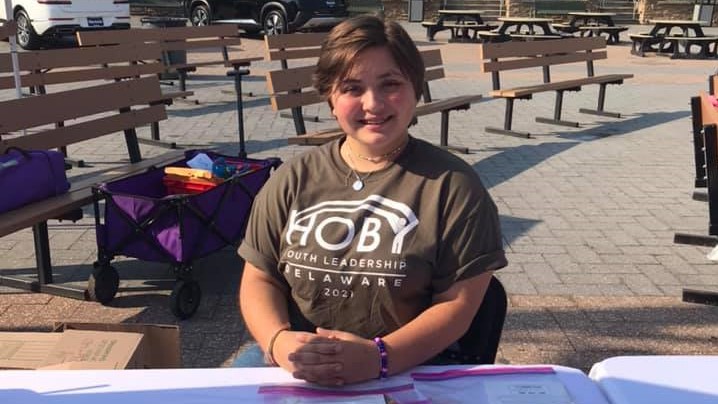 Shelby Farris holds the certificate signaling her appointment to the State Board of Education.

A high school junior from Bridgeville has been appointed by the governor to serve as a non-voting member on the state Board of Education.

Shelby Farris, who previously attended Woodbridge High School and now attends Positive Outcomes Charter School in Camden, will join the board for its November meeting and serve through the end of the 2021-2022 school year.

After a rigorous selection process, Farris said she feels extremely lucky to have been selected for the position. Throughout her term, she hopes to spread awareness for issues relating to diversity and equity in schools.

“I’d really like to thank the governor and the selection committee for trusting me with this huge role,” she said.

In 2018, the General Assembly passed House Bill 455, which added two non-voting seats to the State Board of Education, including one student seat — to be held by Farris — and one teacher seat, which is currently held by 2017 Delaware teacher of the year Wendy Turner.

“We need to hear the perspectives of students like Shelby as we make big decisions about education in the state,” said Gov. John Carney. “Shelby brings a unique perspective from her experiences in traditional district and charter schools. I appreciate her willingness to serve in this important role.”

The organization’s mission is “to help people turn their creativity into compassion.”

To date, more than 20,000 volunteers have created more than 60,000 creative compassion items such as pillows for children with cancer, painted rocks for rock gardens at long-term veteran care facilities and cards of encouragement for members of the military, veterans, hospital patients, long-term care residents, teachers and essential workers during the pandemic.

Last year, Farris founded another group, Students for Educational Equity in the United States, to help students find ways to get involved in making positive changes in their schools.

“During the pandemic, I noticed that there was a lack of a representation for remote students with learning plans,” Farris said. “And so, we have as a group, done a few different things including writing petitions, one of which was to even out the grading for virtual learners — that one went nationwide on Facebook.”

Farris is a past recipient of the Governor’s Youth Volunteer Service Award.

Edward Emmett, director of Positive Outcomes Charter School, said the governor could not have selected a student more fitting than Farris for the role.

“We’re absolutely thrilled that one of our students is being recognized for that achievement,” Emmett said. “But the bottom line of the whole thing is that she’s such a remarkable young woman. If you look at everything that she’s done in the past, you’ll see that she certainly is deserving of that honor. We’re very proud of her.”

Emmett said he believes Farris will bring a valuable perspective to the state Board of Education.

The board’s regular monthly meetings are open to the public and are typically scheduled for the third Thursday evening of the month. The board rotates its meetings to be held in all three counties.

“We are looking forward to hearing from Shelby and welcome her perspective as she brings the student voice to the board,” said board president Whitney Sweeney. “Having that perspective is increasingly important as students return to classrooms after hybrid and remote learning.”

Farris’s mother, Suzanne, said she’s incredibly proud of Shelby and that the governor couldn’t have made a better selection.

“Shelby has become very vocal in her own learning,” she said. “Facing challenges with students that have exceptionalities, and teaching them to be their own advocate and be their own voice is hard enough and we were very proud of her when she kind of found her voice in that way.”

She said she’s watched her daughter interact with kids from across the country who want to become advocates for themselves.

“It’s been an amazing process and I couldn’t be more proud,” she said.