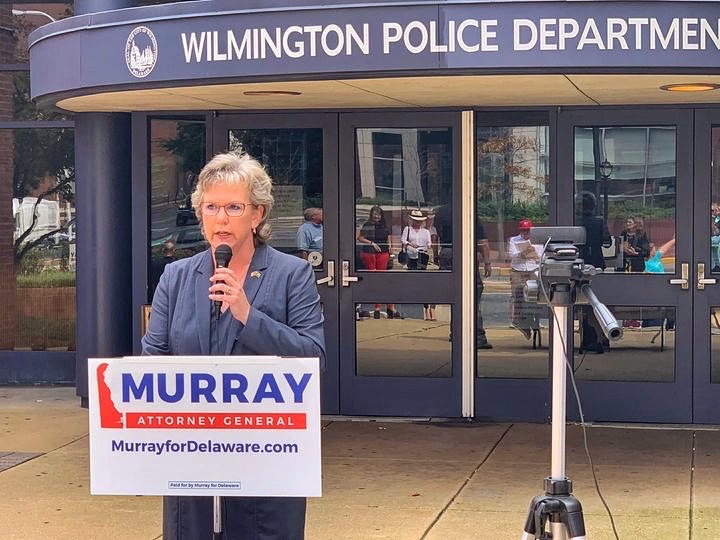 Murray said her candidacy was the first step in an “important quest to make the streets and neighborhoods all over Delaware safe again.”

Even so, Murray said she believes Delawareans want an AG who will work with law enforcement to keep violent criminals off the street.

“They want an attorney general who will protect their rights and freedoms rather than attempt to take them away and impose a ‘woke’ agenda,” she said.

Murray called incumbent AG Kathy Jennings, who is a Democrat, an “activist general” who believes law enforcement officers are the problem, not criminals.

She cited a June 2020 letter sent by the Delaware Fraternal Order of Police, State Troopers Association and Police Chiefs’ Council which criticized Jennings for declining to prosecute protestors arrested following the George Floyd shooting in Minneapolis.

“It is extraordinarily sad that our police have no confidence in the person who is supposed to be the top cop,” Murray said. “This has to stop. Our activist general politicized the office by not prosecuting violent protesters.”

She said she would take a different approach if elected by siding “with the victims of crimes — not the criminals.”

Murray said the effects of Jennings’ “activism” have become increasingly evident in Wilmington.

“People are scared to walk the streets, they’re afraid to drive to Wilmington,” she said. “The message has been sent that Delaware is open for crime. Well, I have a message for criminals: When I’m attorney general, I’ll be tough as nails and I’m going to prosecute you to the fullest extent of the law.”

Murray has long been expected by political insiders to run again for governor in 2024.  Win or lose, she will not, she said.

“There’s so much that has to be done to make our streets safe again,” Murray said. “There is no way I would consider not fulfilling the full term.”

Murray believes she is better positioned to appeal to independent and Democratic voters than when she ran for governor.

“If I’m coming at this saying: it doesn’t matter whether you’re a Democrat, unaffiliated or Republican, do you want your street safe, do you have a vested interest in this — that’s a narrower issue than what I encountered in the governor’s race where there’s a bunch of different topics that everybody has different opinions on,” Murray said in a statement to Delaware LIVE News.

“There are days where absolutely I find myself saying, you know, why am I doing this,” Murray said. “But I think that I can make a difference, and I feel a duty to do that.”

Murray said she believes she stands the best chance as a Republican to win statewide office.

If she is successful, Murray will take office in the midst of her former opponent’s second term. She said her experience as an attorney would equip her to work with Carney, despite their differences.

“Negotiation is absolutely paramount in order to be successful as an attorney,” Murray said. “I actually think that I could work well with Gov. Carney — this job should be nonpartisan, you know. This is about enforcing the law.”

“Murray claims that one of her top priorities is to keep politics out of the attorney general’s office,” Maron said. “Yet, Murray has found a way to position herself in the center of multiple political debates since her failed campaign last fall.”

Maron said Murray had become the poster child for the “Reopen Delaware” movement, brushing off the deaths of hundreds of Delawareans who have fallen victim to COVID-19.

“It is clear that Julianne Murray is not interested in doing the hard work of governing, but instead wants to simply stir the pot and grandstand at the bidding of the Delaware Republican Party,” Maron posted.

Murray said Maron’s post was shortsighted and incorrect, but that “she’s allowed to do that.”

“This is a land where lots of people have opinions,” Murray said. “Clearly she is not a fan, and that’s too bad.”

Witzke was widely denounced during her 2020 campaign for her hardline stances on social issues and affiliation with fringe far-right group Q-Anon.

“The voters of Delaware have already rejected their brand of conspiratorial and extremist politics once before — we are confident that they will do so again,” Maron wrote.

Murray said she was surprised Maron would equate her with Witzke because she “was not put in that category in the governor’s race.”

“The whole tenor of the post that she made was essentially ‘those crazy Republicans,’” Murray said. “I just think that that is not a fair depiction of me or where I stand on things.”