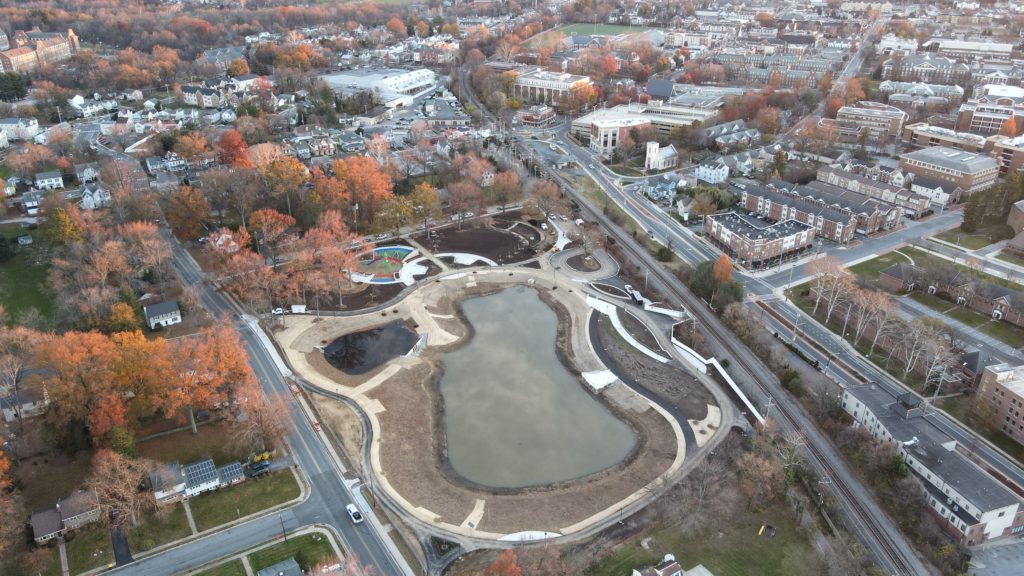 Newark’s 37th park opened this month, replacing a portion of the property where the University of Delaware’s Rodney Dorms once stood.

“We wanted something that was going to be unique,” said Newark parks and recreation director Joe Spadafino about the natural play area. “Not just your swing set and typical play features. We wanted to make the amentias something that was unique in our park system, and I think we’ve done that with Hillside Park.”

The city invited residents to suggest names last year. The list was whittled down to seven and sent to Newark’s mayor and council, who chose Hillside Park, suggested by Barbara Morris, who was first to suggest it. She won a $100 gift card and the chance to go down the park slide before it officially opened.

Hillside Park was originally planned to open sometime in August, but rain days and supply chain issues caused delays. Instead of waiting until the following spring, the city decided to open it when it was ready.

The city is still waiting to receive the materials to construct two pavilions on the property. They should be up by spring.

Beyond public enjoyment, the park serves a serious purpose as a storm water drainage pond. 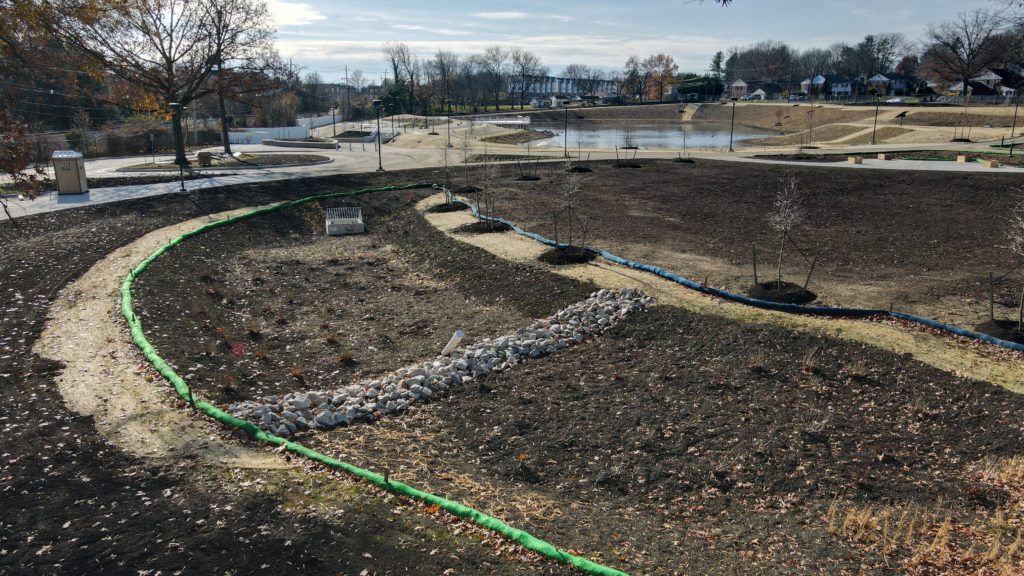 The pond at Newark’s HIllside Park acts as storm management for 70 surrounding acres.

Most of the project, including buying the  including the purchasing of the land from the University of Delaware was funded through Newark Public Works as a watershed project, totaling about $9 million dollars.

The city knew in 2015 that the Rodney Dorms are lacked any real storm water management, said Tim Filasky, director of public works.

“Back in the 50s and 60s and even into the 70s and 80s, most neighborhoods were designed with pipes to just get the water away and get it to the creeks as fast as possible,” he said.

Only more recently have people realized that the implementation of storm water management tools increased water quality while decreasing flooding,  he said.

Officials realized that the dorm property would make an ideal location for a storm water management pond.

The Hillside Park pond intercepts water coming from above the water shed, mainly the Nottingham and Oaklands subdivisions, and slowly releases into the downstream system. About 70 acres of land now drain into this pond.

Before the pond was available, the downstream system would often become overwhelmed, flooding areas of south Main Street and then create even more problems further downstream.

The pond already has had two larger storms test its effectiveness, including the remnants of Hurricane Ida.

“By all indications it really did hold its own,” said Filasky. “The water flowed in; it did fill up. But we didn’t hear the complaints or anecdotally see any issues just downstream of the pond. We’re pretty confident that it’s functioning as it was designed.”

Once grass has grown in and trees have bloomed in the spring, the park will have an official grand opening and ribbon cutting ceremony.

“The feedback we’ve received from the public during the first week has been outstanding,” Spadafino said. “If you were to go out there, you’d see the smiles on the kids’ faces and the parents’ faces and hear the laughter, at least from the park end. That’s a great sign for us.”