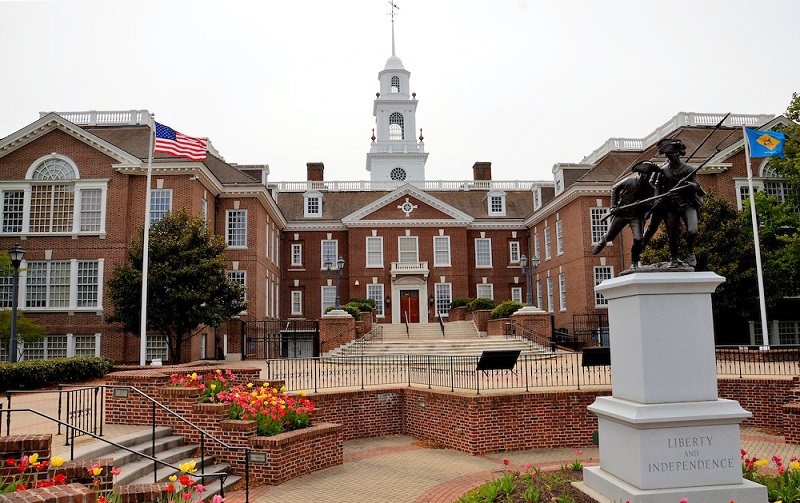 A few members of the public will be allowed to sit in the gallery during General Assembly Sessions.

With the Delaware General Assembly in the last month of its regular session, rules have been changed to open Legislature Hall in Dover to the public in a limited way.

The statehouse will require the public to sign up to reserve a spot in the gallery for House and Senate sessions, a press release said Friday night.

Those spots will be limited. with 25 available in the House and 25 in the Senate. Those who are admitted will be allowed to arrive 30 minutes before a session. They will be asked to leave once the session is completed. All members of the public must wear masks while in Legislative Hall.

Access to the rest of the building will be forbidden, and the House and Senate floor is closed except to members and staff.

Floor sessions will be held in Leg Hall in a hybrid form, with only members and staff allowed on the house floor. Members may opt to dial in from their legislatives offices.

The General Assembly press release noted that Legislative Hall has been closed since March 2020. In that time, 10% of Delaware’s population has been infected with the COVID-19 virus and more than 1,670 residents have died.

“Space constraints inside Delaware’s Legislative Hall — one of the smallest statehouses in the nation — have previously made the public’s safe return impossible given previous social distancing requirements,” the press release said.

It said small numbers of people now will be allowed because Gov. John Carney now has reduced social distancing from 6 feet to 3 feet, and nearly half of eligible Delawareans are fully vaccinated.

The announcement comes two days after House Minority Leaders Danny Short, R-Seaford, told fellow members of the Legislative Council, a committee of leadership members of Democratic and Republican caucuses that he thought it was time to open.

Speaker of the House Pete Schwartzkopf, D-Rehoboth Beach, told him that they had been talking about that, and he would call him after the meeting to discuss what they were thinking.

Short and other Republicans pointed out that when they go out, most people are not wearing masks and they didn’t know why Leg Hall couldn’t open. Democrats said they still see many people wearing masks and that there were issues they weren’t sure how to deal with.

One included the fact that many people working in Leg Hall and many elected officials have children who have not been vaccinated yet. Nobody wanted the kids to somehow be exposed through their parents’ work.

While a special session has been called for later in the year to deal with redistricting, the regular session must end by midnight on June 30, 2021.

House and Senate members will be asked to wear masks in the halls and public areas of Legislative Hall. If vaccinated, they can take them off once they are seated at their desks on the floor.

Visitors will only be able to sign up once a day for a seat in the gallery, the press release said. Seats will be limited to one person per seat per day.

“In order to accommodate as many Delawareans as possible, members of the public are encouraged to sign up to observe only one chamber each day,” the press release said.

Visitors who want to sit in the gallery will be asked to sign up on the legislative website. Sign-ups will start at 5 p.m. the day before a session, and the window will close when the seats are full, or at 10 a.m. the morning of the session, whichever comes first.

Capitol Police will be provided a list of those who have reserved a seat.

Doors to Legislative Hall will open at 1:30 p.m. The public will be directed to the staircase or nearest elevator to get to the gallery.