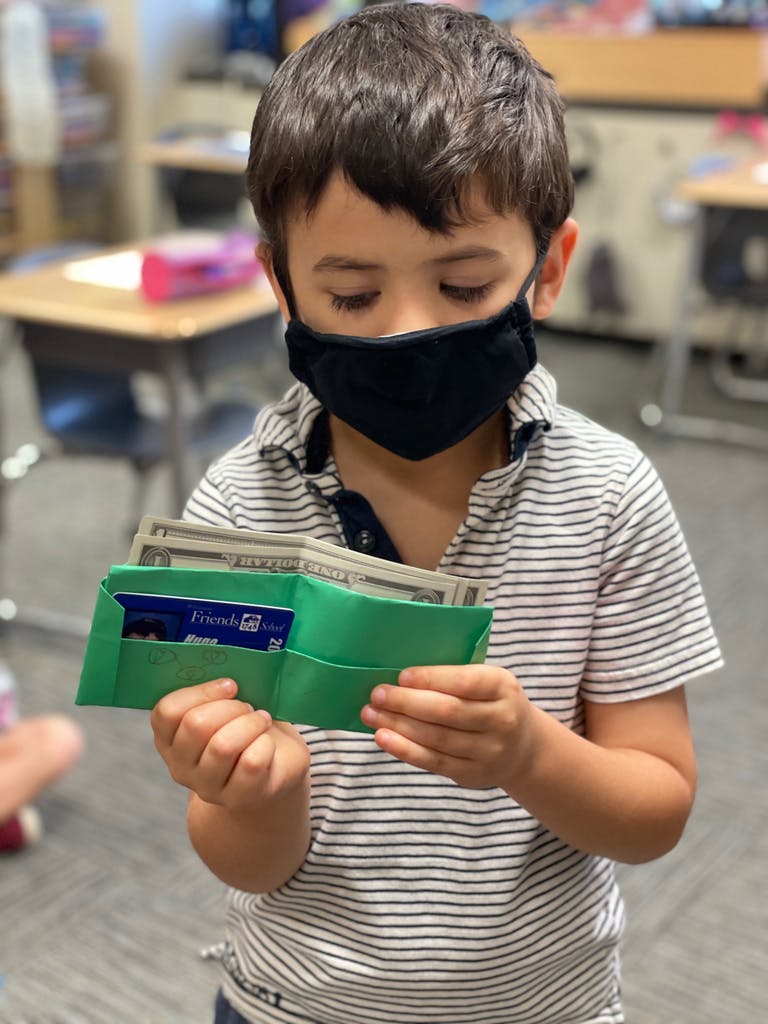 Those jobs were not assigned or created by Willie, but brainstormed last week by class members who created the jobs they thought the group needed. The students also created job descriptions and applications, and then evaluated the applications and decided who would be offered which job.

It’s part of the class’s final social studies unit of the year. The students talk about various aspects of a community, including workers and jobs before they start choosing them for the classroom.

“Every year we have jobs like line leader and door holder,” Willie said. “They felt that there were some important jobs that we didn’t have listed. So they listed jobs that were important to them.”

Those jobs include the messenger, who takes notes from the teacher to another teacher; the plant waterer; the people waterer, for classmates who forget their water bottle and helping with snacks; the mail carrier/pizza helper who takes envelopes from Willie to others and delivers slices during Friday’s pizza day; the class photographer; the recess helper, who takes the ball bag out; the nurse’s helper, who brings back bandages or escorts someone to the nurse;  the book helper who delivers and puts up books; the lunch grace sayer; and the teacher’s assistant.

The kids caught on to some aspects of the business world fairly quickly.

“I learned that having a job is a big responsibility, and people are depending on you to do your job,” said Isadora Montejo.

Classroom job creation and pay for work has been a part of the Wilmington Friends first-grade curriculum for about three years, Willie said.

The applications include two questions: Why do you want the job and why do you think you’d be good at the job. Applicants for jobs are asked to sit in the hall “waiting room,” complete with chair and magazines, while the class discusses the job and the applicant without Willie weighing in.

That came up in January, when the class was talking about peacemakers. Willie said she would read a story and stop when there was a conflict in it. She’d asked the class how that problem could be solved and then tell the class she was not going to call on anyone. and they would have to take turns.

She reminded them that they knew how to listen to what someone is saying and that it was OK to disagree, but they had to disagree respectfully. Then she sat back and let them talk. They also have had lessons on dealing with disappointment. 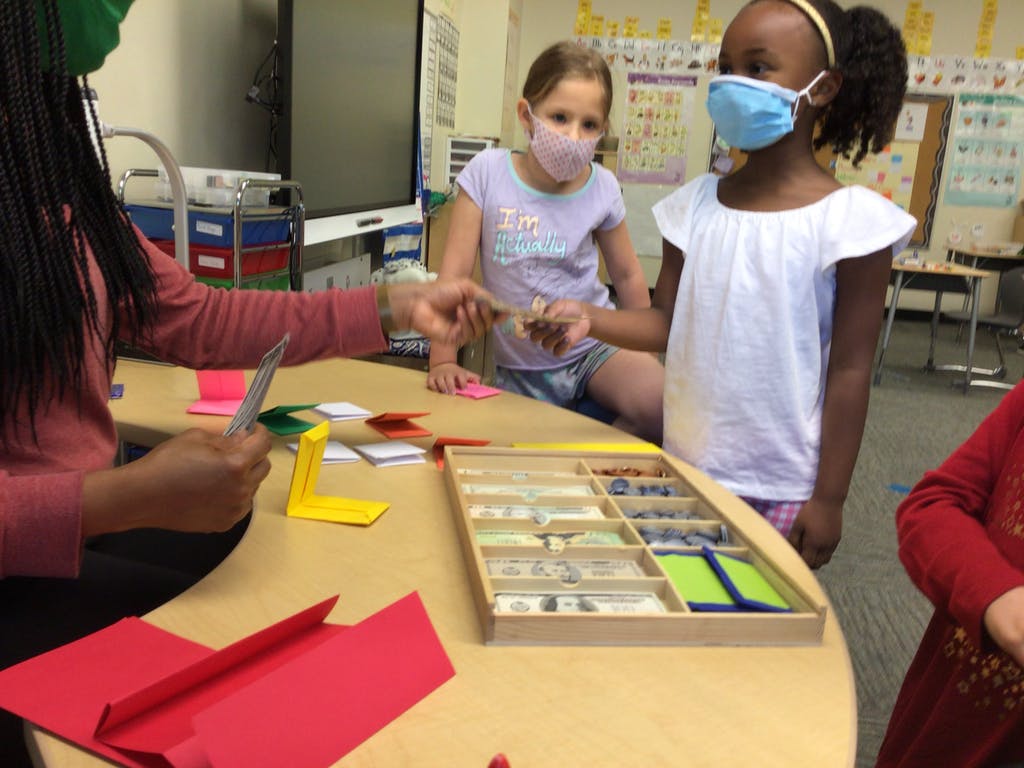 For the hiring process, a student moderator would tell Willie what jobs were being considered and who had applied. The class would first list all the ways the applicants would be good for the job, and then any concerns the class had about an applicant not being good for the job.

A few things stumped the kids. When two people applied to be messenger, and the class all thought they would both be good, they turned to Willie and asked what she thought.

She asked them whether there was a job that had not been listed but could use those same qualities, and the kids decided to add a teacher’s assistant.

The applicants are called back in and a student formally offers them the job. The applicant must accept or decline. Everyone took the job offered. Willie said the students all know they can say no if they really don’t want the job. No one did this year.

Abigail Dalby said she liked the discussions, partly because her classmates talked about people’s qualities, and didn’t just say someone should have job because that person was their friend.

“I learned that sometimes you cannot get the job you want,” said Mikaila Young, “but they’ll give you a different job that is what you’re good at.”

“What I learned is that you get paid after every week,” said Sloane Corry, “and all the jobs are really fun.”

“In real life people who have jobs, they don’t get paid every day,” said Ava Forester.’

Willie said the pizza helper pointed out that if she only worked one day a week, she would not make as much money and asked to apply for a second job as recess helper. She was allowed to, and she got the job.

Starting Monday, which was a training day, the kids had to “clock in” by using a hole puncher to punch the correct date by their names. They all got a play $5 bill to put in their paper wallets, for which they had to pay $1 and tell Willie how much change they got.

On Tuesday, she reminded them that it was up to them to remember to clock in and do their jobs.

At the end of this week, she will write them checks for their pay. 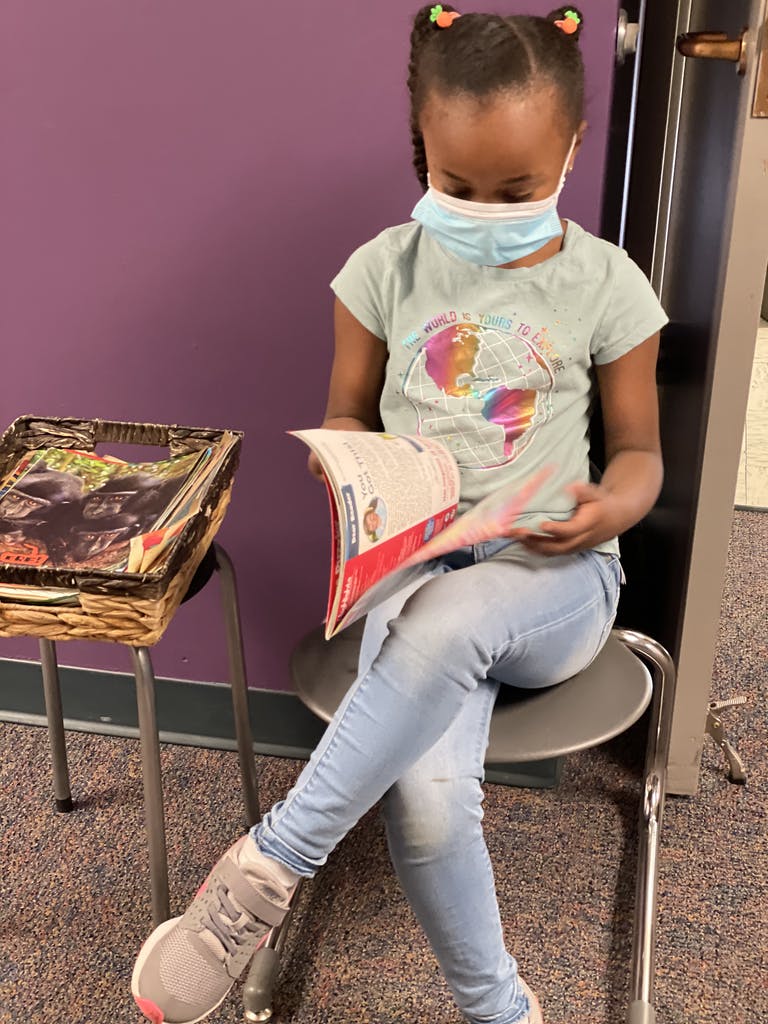 Mikaila Young sits in the hall ‘waiting room’ as her classmates discuss her job application.

“This job is good for me because Mrs. Willie doesn’t remind me to clock in for my job, and my job is to deliver books,” said Samuel Leutzinger. “My parents’ bosses do not call them to remind them to get to their job.”

When one student ratted out another for not doing his job, Willie thanked the student, said she would take care of it and for them not to mention it to others.

The jobs will last a few weeks. Willie said first graders not only have short attention spans, but also start getting interested in someone else’s jobs.

At the end of the unit, she will open a store at which the kids can spend their money. The retail day starts with her sitting in the hallway, with a free paper bag and a $4 fancy bag. Students can choose which they want.

Inside the class there will be a collection of items such as a fancy pencil and a plain pencil or a pack of saltines and a pack of Oreo cookies, but always a similar combination of items, one inexpensive and one more expensive.

The kids have to figure out how much they can afford. Some always realize that they can’t buy as much if they bought the $4 fancy bag, Willie said.

Part of the social studies curriculum is about wants and needs, as well as goods and services.

The class is not only supposed to teach finite things, such as the importance of health care, libraries and city workers to a community.

It also teaches them about making decisions, whether it’s choosing a job or how much to spend, Willie said, and helps develop communication skills. The first graders get to use the language and math skills they learned this year, and they have an inkling about how they will use them in life.

The classes prompt other questions. On Thursday, they asked Willie how money gets on a debit card.

As part of the unit, the student’s parents have been visiting the class via Zoom to talk about their jobs, what they do, who they deal with and how important it is to work as a team.

It doesn’t take the kids long to catch on to key concepts in sales and marketing.