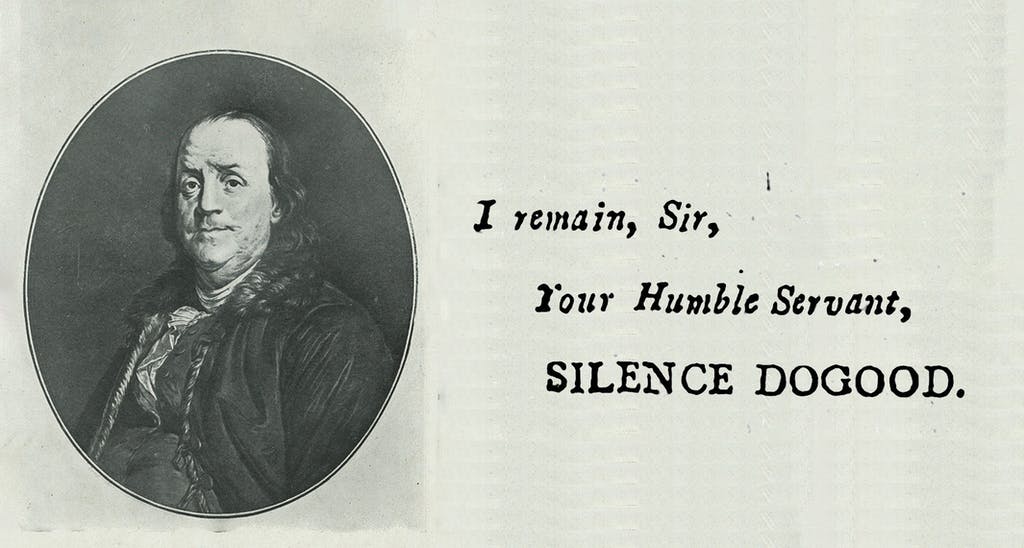 Benjamin Franklin used the pen name Mrs. Silence Dogood in the New-England Courant after being denied being published several times under his own name

Our right to freedom of speech protects us as individuals from government censorship. It gives us the freedom to speak what is on our mind without fear of retribution from the government.

This right was established in the Bill of Rights in 1791, 15 years after the 1776 signing of the Constitution, and the amendment reads:

Congress shall make no law respecting an establishment of religion, or prohibiting the free exercise thereof; or abridging the freedom of speech, or of the press; or the right of the people peaceably to assemble, and to petition the government for a redress of grievances.

Why did the Founding Fathers find freedom of speech and freedom of the press so important to ensure they were to be included in the first amendment of the Bill of Rights? How have these rights been both protected and challenged throughout American history? How do these ideas relate to public expression in our modern times?

As we continue to engage and communicate online through the internet in modern ways—from websites and email to social media—these are all greatly important questions that can provide guidance for how we can continue to protect our rights as individuals.

Although the First Amendment shields individuals from government censorship, it does not inherently protect us from private company censorship. Now, with the evolution of the internet and social media, private companies hold domain over public discourse more than ever.

We must ask what consequences come from these centralized access points for public speech and the sharing of ideas. Is this problematic? How in the past has our country faced censorship when it affects public communication? What can we do to ensure our First Amendment rights are protected equally for all in the modern digital era?

Let us take an historical look to inform how we can move forward.

Prior to the Bill of Rights, we’ve had many challenges to free speech in our country. In 1722 when Benjamin Franklin was just 16 years old, his older brother James, printer of “The New-England Courant” published critiques of the government and was jailed for weeks for not disclosing the author. Benjamin Franklin took over the press in his brother’s absence, and the events no doubt influenced his use of the print media to express political ideas prior to the American Revolution.

After the signing of the Bill of Rights, the first major challenge to Freedom of Speech came under President John Adams with the Sedition Act of 1798, which made it illegal to criticize a government official unless the claimant could successfully defend their critiques in a court of law.

Although more than two dozen individuals were arrested under the statute, the prosecutions helped galvanize opposition to Adams’ administration and quickly the “prosecuted Republican printers and editors became folk heroes.”

As a result the Republican Thomas Jefferson won the presidency and pardoned all of them two years later.

Another attempt at limiting freedom of the press and speech came the Sedition Act of 1918 that attempted to limit rights during war, making it a crime to “willfully utter, print, write or publish any disloyal, profane, scurrilous or abusive language about the form of the Government of the United States.”

An effort to quell opposition to World War I and the draft, the act was repealed two years later in 1920, the same year the American Civil Liberties Union was founded.

Throughout our country’s history, books have also faced bans and censorship, including James Joyce’s “Ulysses,” William S. Burroughs’ “The Naked Lunch” and many of Hemingway’s works among countless other books.

But our freedoms always tend to prevail. You can buy any of these books right from your phone today.

There have been many challenges to free speech and freedom of the press throughout our country’s history from public and private entities. What is concerning is when the private companies gain so much influence that their platforms begin to have an undue influence on the public discourse and access to information.

We face a critical time when we must consider: do the social media and digital web giants of today constitute what the Supreme Court calls the “modern public square”?

If so, we have a duty to protect our right to communicate in these spaces. The First Amendment protects the right to freedom of expression justified via the marketplace of ideas and individual self-fulfillment. Private entities can become so powerful that they too can infringe on these rights.

When a powerful private company such as Facebook or Twitter engage in censorship, we must ask: are we individuals able to fairly participate in the marketplace of ideas? Are we allowed the liberty to engage in our own self-fulfillment?

75% of Americans today think social media websites censor political views. While digital communication has allowed for positive social movements to mobilize across the country and the world, we have also seen the unintended consequences of a creeping social policing economy where motivated actors are driven to deplatform their opposition without concern for affected communities, families and innocent individuals.

When a citizen-led effort to limit certain groups’ free speech rights spills over into sanctioned retribution from official institutional platforms like the social media giants that dominate our public discourse, we must ask if we have gone too far? And have our rights been violated?

As the ways we use the internet and digital communication continue to expand, we must continue to ask these challenging questions. As platforms limit voices of all types and to varying degrees, we must be cautious not to go down the slippery slope into a more authoritarian, nondemocratic state.

We must continue to protect our First Amendment rights and ensure the United States remains the bright beacon of freedom and liberty our nation represents to the world.

Chris L Kenny, Esq. is a Delaware business leader and philanthropist with a mission to provide the Delaware community with engaging, action-oriented thought leadership on the greatest issues affecting life and business in the state. Founder of Delaware Live and president and CEO to one of Delaware’s largest chain of supermarkets, Chris Kenny is a current and former board member for more than a dozen state nonprofits  and offers unique insights into the Delaware business climate, economy, food industry, its people and community. Read his personal blog The Sword in The Stone here and visit his personal website here. Follow him on Facebook, Twitter, Instagram, LinkedIn and Youtube.