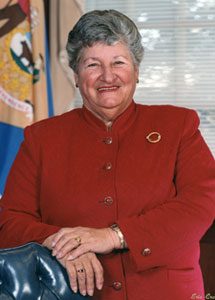 Former Governor Ruth Ann Minner, who served two terms as Delaware’s only female governor, died on Thursday, November 4. Minner overcame significant obstacles before being sworn in as governor and she was known for her toughness and strength.

“She was a leader who had a real common touch,” Governor John Carney, who served as Minner’s lieutenant governor, said. “Governor Minner focused on raising up the working families of our state because she knew what it meant to struggle. Having grown up poor in Slaughter Beach, she brought that perspective to her job every day and she never lost her attachment to those roots.”

Minner was born the youngest of Samuel and Mary Ann Coverdale’s five children. It was on the farm that she developed her work ethic, learning to drive a tractor, milking cows and tending crops. At 16, she quit school, something her father told her to do as it was “expected.” At 17, she married her junior high school sweetheart, Frank Ingram and the two began a business in Milford.

The couple had their first son, Frank, soon after they married. A second son, Wayne, was born four-and-a-half years later and a third, Gary, four-and-a-half years after that. All three sons were planned as the couple wanted to be sure they could attend college. Minner once said that the boys were spaced apart so they each got their share of attention when they were young and so they would be less likely to compete against each other than siblings who were closer in age. Her husband had political aspirations and Minner found herself stuffing envelopes for his campaign.

However, tragedy struck when her husband, only 34, died of a heart attack, leaving her a widow with three young boys and a mortgage. Minner returned to school, earning a GED, taking classes down the hall from her son, Frank, who was in eighth grade, working as a statistician with the Maryland Crop Reporting Service at the same time. Often, her sons went to work with her as she counted plants and kernels.

“We all did our homework together and that made it a lot of fun,” Minner said in an interview in 2001. “One of the reasons I went back was because if the boys knew I didn’t have my education, it might give them the idea they didn’t need one. I never had any one quit school.” The boys learned the same work ethic as their mother at a young age, knowing that if chores were not done, they could not go to the ballpark unless they were.

Times were hard and Minner spoke of needing to purchase a new car in order to keep working but being denied a loan in 1967.

“My 1963 Chevy was dying, but dealers refused to let me take out a loan for a car,” Minner said. “They’d say “Oh, you’re single; we need a man to sign for the loan. I turned to banks, but they, too refused, requiring a male signature.” 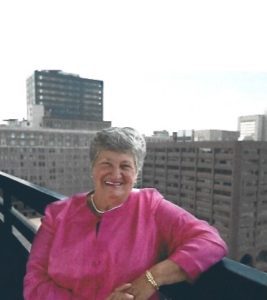 After her husband’s death, Minner leaned on a family friend, Roger Minner, whose marriage had ended. Roger, a tow-truck operator, let the boys hang out in his shop and Minner often joked that he dated the boys for a year before he asked her out. They married in 1969 and began a towing company. Gary and Wayne joined Roger in the business until Roger died of cancer in 1991. Frank became a teacher at Milford High School.

In 1973, Minner ran for and won a seat in the Delaware House of Representatives for the 33rd District, the first woman to hold the seat. One of the things she remembered was the banks denying her a car because she was a single woman and knowing that she might be able to change those rules prompted her to run. As a representative, she lobbied banks in the state to grant loans to women more freely.

As a representative, Minner served on the Bond Bill Committee and mastered the art of capital spending. She also served as House Majority Whip and the chaired the Rules Committee, successfully removing a rule that allowed representatives to table roll call votes. In 1982, Minner was elected to the State Senate where she was credited with the Delaware Land and Water Conservation Act protecting 30,000 acres of land. The act also created the Delaware Open Space Council.

Not long after her husband, Roger, was diagnosed with terminal cancer, Minner was approached about running for lieutenant governor.

“Everyone knew Tom Carper was going to be the one running for Governor, so I went to him and said ‘Tom, I want to run, but I need to be home with Roger’,” Minner said in a 1998 interview. “He said ‘no matter what, we’ll make it work.’ We found a way.” Her husband joined her on the campaign trail as much as possible with her often delivering speeches from the back of his flatbed truck. When he could no longer join her, she again questioned her decision to run, but persevered, winning the election by 60 percent of the vote, becoming the first lieutenant governor in the state.

In 2000, Minner was elected Governor, beating John M. Burris who was also from Milford. She won a second term in 2004, beating William Swain Lee. As governor, Minner worked to improve schools, foster economic development, protect the environment and run the state responsibility. During her term, smoking was banned in virtually all indoor spaces and ensured that state employees called to serve during Operation Enduring Freedom did not lose pay. Drunk driving penalties were increased, and she created a process to collect additional data related to cancer victims in order to study environmental causes. 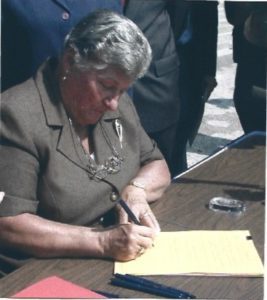 After the election as lieutenant governor, Minner was asked how she wanted to be addressed and responded “just call me Ruth Ann.” She visited the same hairdresser for decades, getting the same 30-minute shampoo, cut and blow-dry from Lucy Schuler. Even while living in the Governor’s Mansion, Minner shopped off the rack and her inaugural gown came from Lord & Taylor.

“Ms. Minner will long be remembered for her more than three decades of public service as well as her accomplishments,” Representative Bryan Shupe said. “From earning her GED in 1968 to becoming the first woman governor, her life and achievements should serve as an outstanding example of what can be done with resolve and dedication.”

Lt. Gov. Bethany Hall-Long called Minner a “trailblazer who worked tirelessly in a bipartisan manner to uplift families up and down the state.”

“Governor Minner lived by a simple code that she so often articulated,” Representative Lisa Blunt Rochester said. “For Ruth Ann Minner, farmer, gardener and daughter of a sharecropper, it is simply this:  Work hard. Do the right thing. And leave things better than you found them. Ruth Ann Minner worked hard, did the right things and left things better than she found them. I, and our entire state are grateful for her life of service.”