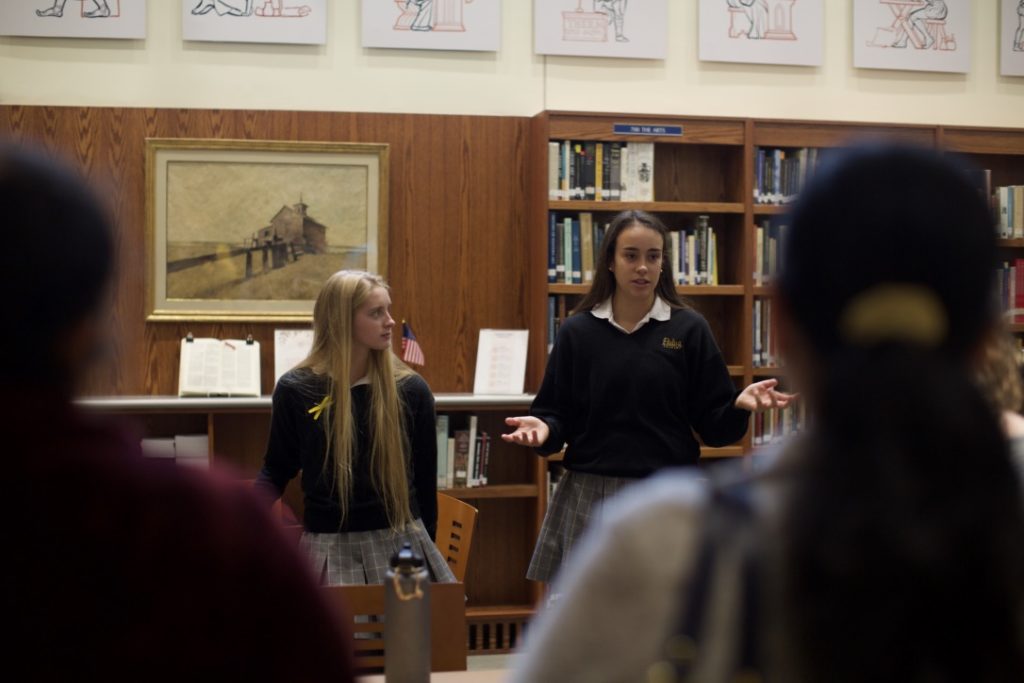 When Gabby Guerke was ready to leave Odyssey Charter School for ninth grade in 2019, she wasn’t sure what she wanted in a high school.

“My parents and I just felt like we needed to look everywhere,” she said. “So that’s what we did.”

Like hundreds of other eighth graders each fall, Guerke entered Admission Season.

Just weeks after every fall semester opens in Delaware, young men and women in the eighth grade who are considering a private school are already focusing on the next year. They register for open houses, schedule shadow days to follow a current student, and circle dates on their calendars for admission tests that will determine scholarships and more.

Padua and Salesianum School start this year’s round of open houses Sunday, Sept. 26. The Catholic Diocese of Wilmington schools agree to hold open houses on different weekends so more people can visit. But because Padua is an all-girls high school and Salesianum is an all-boys one, they can share a day.

Not every school has an open house, but all of them encourage prospective students to spend time in the school with kids their age, a practice called shadowing. That gives visitors a look at the workload, how things really run and the relationships between teacher and class.

Padua expects to have 200 students at its open house Sunday, and a total of 600 people visiting in shifts of 18 families every 20 minutes, said Admissions Director Shana Rossi. Students and teachers will lead the groups on a tour.

Its shadow days started Monday, with 10 students visiting.  The school will average eight visitors a day into December, Rossi said. To facilitate a good impression, the school tries to find out what some of the prospective student’s interests are and pair her with someone with similar interests.

“It’s not a manufactured day at all,” said Lisa Clody, director of enrollment for Ursuline. “They get to come in and go to class. So if the science classes is doing an experiment, they get to experience that. And if it’s a straight lecture, they do that.”

A shadow day allows the visitor to see “if this is someplace that they can see themselves spending the next four years,” Clody said.

Guerke said her decision was made harder by the fact that she wasn’t sure what field she hopes to go into as an adult. Now a sophomore, she’s still not sure.

“I love every subject there is and I was just really interested in everything,” she said. “So I didn’t really know what I was looking for.” 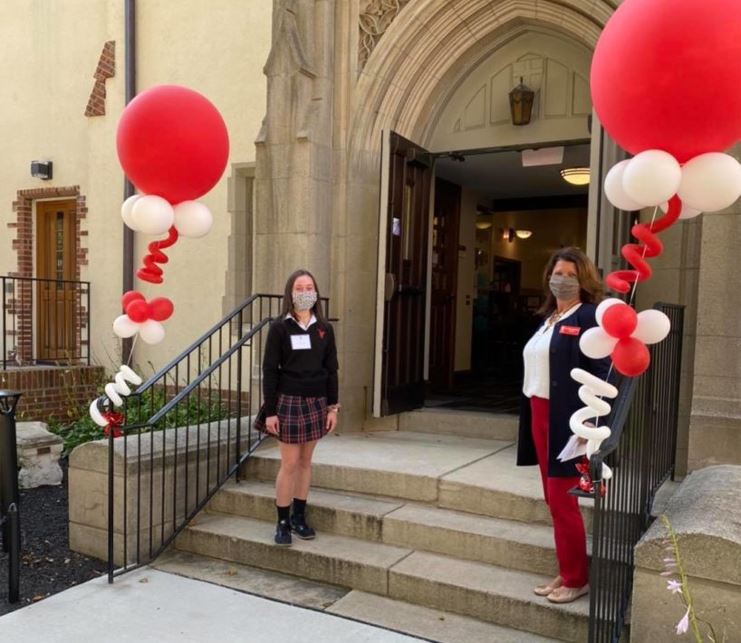 “We all have really rich reputations in terms of being able to prepare students for their next step,” she said. “What we talk about in our process is the fit and feel for each child and their family that comes through.

“What does it feel like for your students to walk through those doors every day? Will they find their people here? Will they be able to participate in school life at its fullest in and out of the academic classroom? And that’s where it’s a really valuable piece of the experience to spend some time on campus. ”

All of the schools want to bring in bright young people eager to learn, to take their place in leadership and to serve the community. They also want diversity and a willingness to contribute.

They phrase it differently.

Padua, Rossi said, is looking for a woman who has a belief in herself, who knows she has growth ahead of her but has hope for the future.

“We cultivate that in our students,” she said. “We always are seeking to inspire them to be their best selves, and to also empower them to be their best selves … We see far greater potential in them than they even see in themselves and in order to help them achieve that, we really give them the support they need to reach those goals that they didn’t even know they had set for themselves. So we look for that student who is ready for a challenge, and that we can provide the support to for her to achieve all of her goals.”

Brown said there’s no clear cut answer about who Friends is looking for, or looking to avoid. It’s interested in the mix.

“We thrive on the differences that folks bring to the table,” she said. “Around here that’s what makes for really rich conversations in our classrooms.”

They want their students to learn to engage in discourse and how to have your say without alienating or being offensive or without discounting the views of someone else, she said.

The schools aren’t just looking at the students, either. All of them are interested in creating a partnership with the families and ensuring parents are active with and at the school, admission officers say. 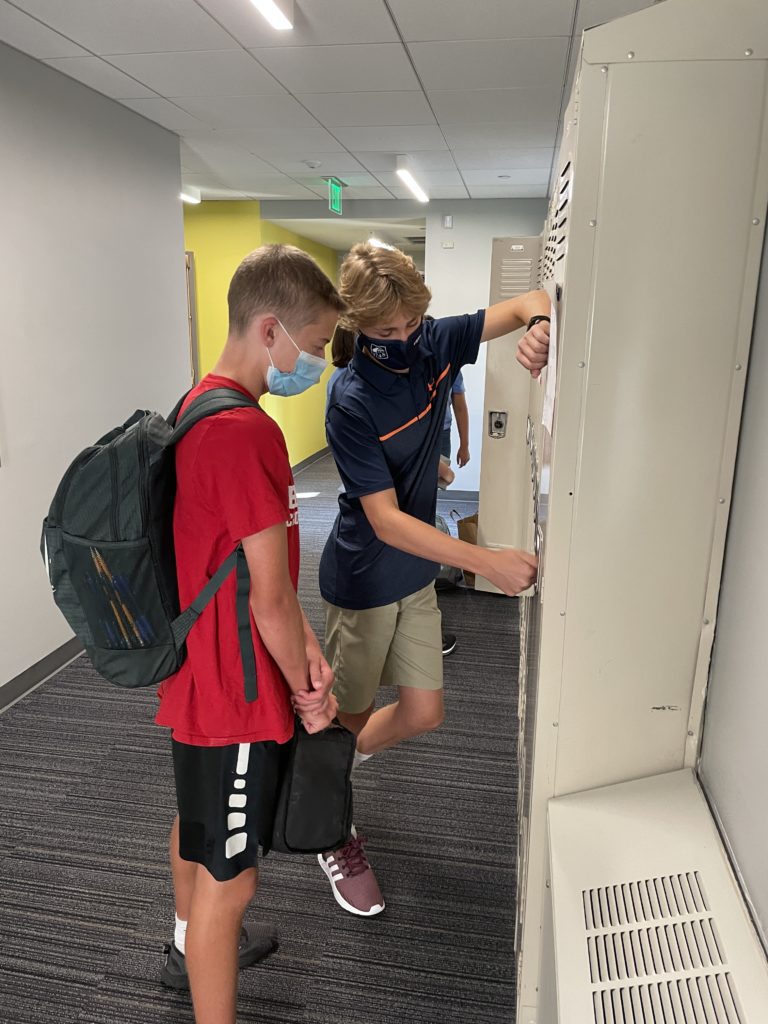 Like most private schools, Wilmington Friends encourages those interested in the school to shadow a student for a day.

Decisions about which school is chosen by a student or which students are chosen by a school often crystalizes into a mutual feeling that there isn’t enough of something — perhaps performing arts or certain kinds of advance placement courses, Brown said.

“It comes down to the nuts and bolts details more than anything, I think, not so much kind of that overarching philosophy that families have,” she said.

Spaces in the schools are limited. Friends tries to maintain its upper school enrollment with each grade having from the low 60s to low 80s in it.

This year, Friends — which has upper and lower schools — welcomed 142 new students, a high number for the Quaker school.  Brown believes many of the new students enrolled because so many families were unhappy with how public schools handled instruction during COVID-19. Its 2021-22 enrollment is 723.

Ursuline wants no more than 60 students per class. This year’s freshman class has 53, leaving slots for students to join in the upper grades, said Clody.

“The school would be very full if I had 60 in every grade,” she said. “If I had 240 students in the entire upper school, that would be a lot.”

Padua tries to keep each class at 125 students, for a total of 500, Rossi said. That allows for classes of 22, which creates an opportunity for a richer discourse between students. Higher-level classes and some electives may have only 12 students, she said.

This year Padua also had a record number of 17 transfer students into 10th grade and higher. It’s normally about seven. She also credits that to families who were unhappy with public schools dealing with the COVID-19 pandemic. 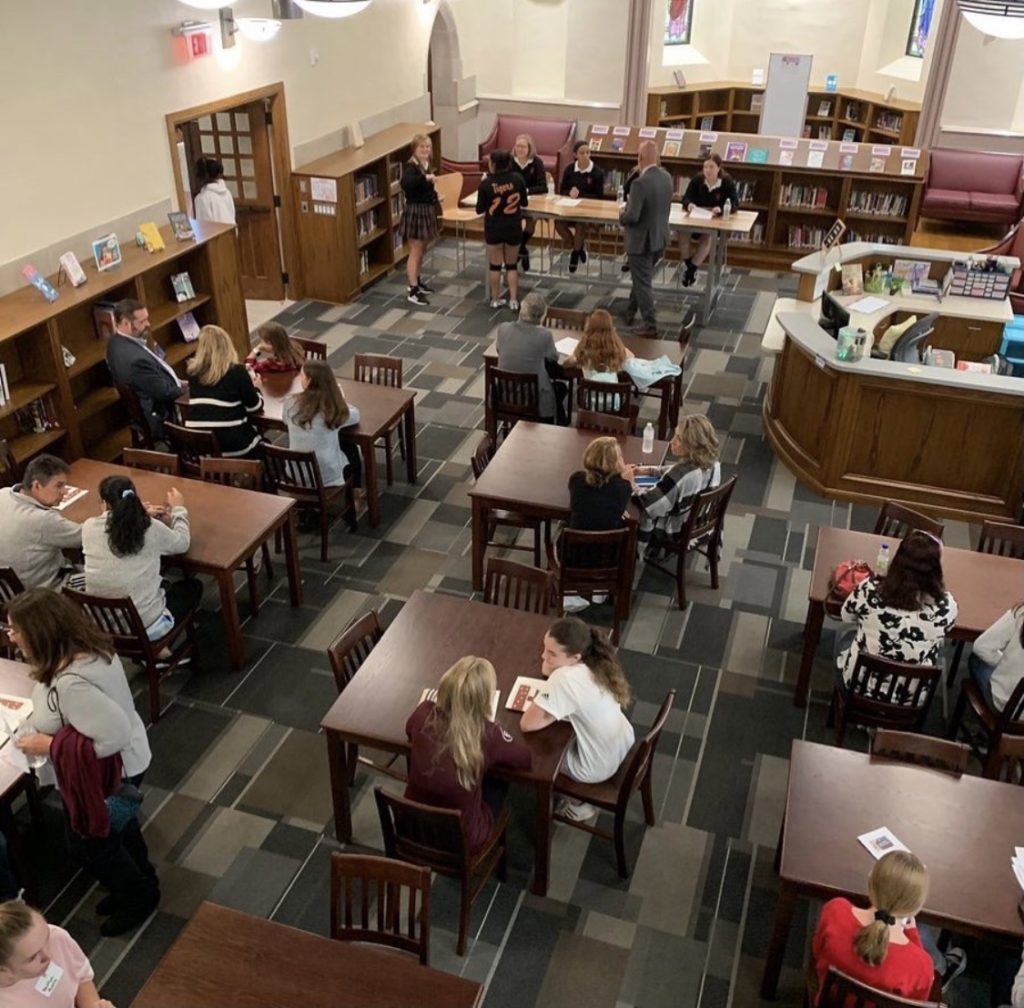 Visitors to an Ursuline Open House wait for the program to start.

All three schools said it’s rare for a student to leave once he or she enrolls.

At Friends, about 46% of applicants are accepted. That doesn’t mean all the others were turned away. Some don’t complete the applications. Some choose other schools. Some end up moving, or don’t move to Delaware when they expected to. A few aren’t ready for the pace or academic rigor, which the school talks about with parents, Brown said.

All of the schools offer financial aid, both as scholarships to people who perform well on the tests and in the form of grants to lower tuition costs to families with lower incomes.

“Our financial aid program is about creating assets for families that want to be here with us and increasingly families cannot manage that price tag, especially when you calculate that out over four years or 14 years, depending on when you start with us,” Brown said. “It’s a hefty investment for anyone to make. Our need-based financial aid, with just over $6 million awarded this year has really helped to create that kind of access for families. And that’s kind of who we’ve been as a school since being founded.”

Clody said 48% of the students at Ursuline, where high school tuition is $24,965, qualify for financial aid.

When Padua started, Rossi said, there was no tuition. Students were asked to sell tickets to a spaghetti supper. That’s changed, and tuition was frozen at $15,700 this year, the same as last year.

About 70% of its students either are on scholarship or have financial aid, she said. Padua this year was able to offer $1.5 million in assistance.

“One of the key takeaways is that as independent schools, I think we are here for everyone,” Brown said. “And that’s not something that is widely known.” 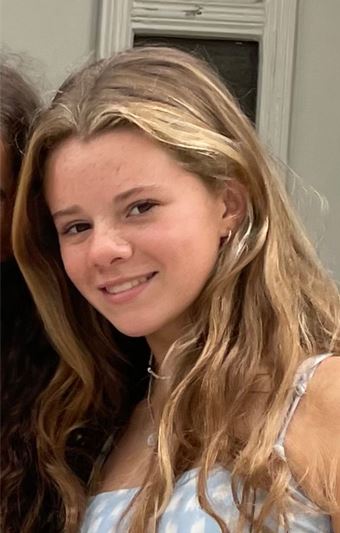 Guerke said that in the end, her choice was easy.

“There was a great reason to go to every school I looked at, but as soon as I went to Ursuline, to have a shadow day, the open house and everything, immediately I just felt like I was meant to be there.” Guerke said.

She and her family liked the idea that the school promoted leadership and strength, but also serving and supporting the community.

“I just thought that was a great component that would help me become a really strong member of society,” Guerke said.

She is sure she made the right decision.

“I don’t think I could be any more happy,” she said. She spent her freshman year in classrooms the entire year, despite the COVID-19 pandemic. A straight-A student, she was able to start taking Advanced Placement classes in her freshman year,

Her favorite moment last year came during a junior varsity field hockey team. She and her friend, Grace Klous, scored the only goal the team had the entire season.

“It was hilarious,” she said. “It was like the best moment of the whole year, and it was just such a uniting moment for our team.”

Her advice for those going through Admission Season is simple.

“I would just say really pay attention to what you’re interested in, and not a lot of attention to what other people say and their opinions on the school,” Guerke said. “I got a little bit caught up sometimes about what my friends thought about certain schools and everything. I would just advise people to focus on themselves and really  look at the school as what it is, not what other people say it is.”