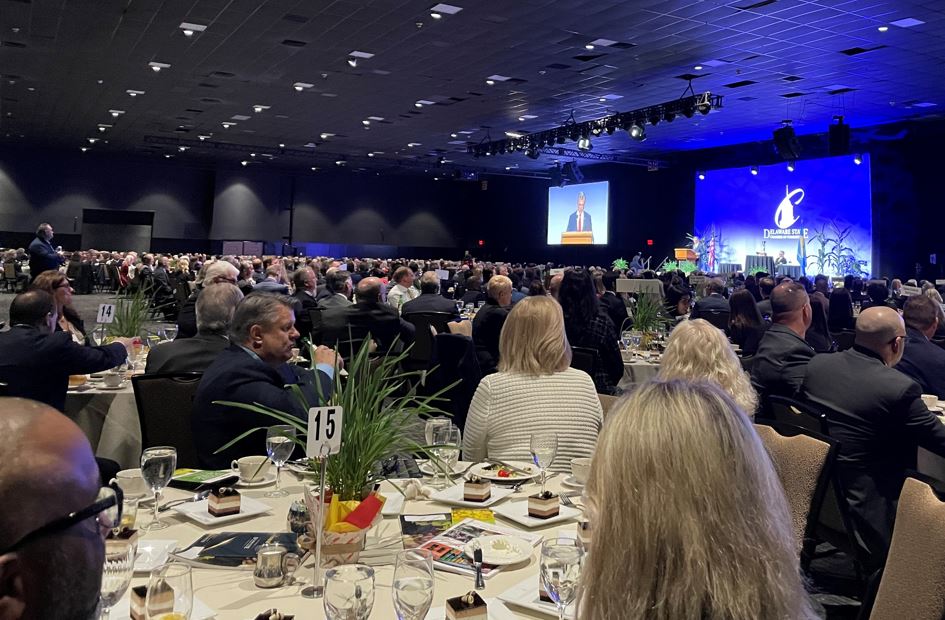 The Delaware State Chamber of Commerce held its 185th annual dinner Monday at the Chase Center. Photo by Kelly Basile.

FMC Corp. scientists test 60,000 new compounds a year in their search for better ways to help crops beat disease and pests to produce more per acre.

That breaks down to seven compounds tested per hour for every hour in a year, said Dr. Kathleen Shelton, executive vice president and chief technology officer at FMC, which was honored Monday night during the 185th annual Delaware State Chamber of Commerce.

Even is a new molecule is discovered, so much research and testing is required that any product containing it won’t hit the market until 2032, she said.

Shelton told the sold-out crowd of 1,000 at the Chase Center at the Riverfront how the company started with 2,000 former DuPont employees after the legacy company merged with Dow. Of those employees, 500 were scientists in research and development.

Many work in Delaware, where FMC has research facilities, farms, greenhouses and more.

In Delaware, Shelton pointed out, nearly 40% of the land is designated agriculture. The state has 2,300 farms that produce $1.5 billion in sales, including corn, soybeans, watermelons, lima beans and cucumbers.

A team of biologists, chemists, entomologists and molecular biologists work in collaboration to create new fertilizers and pesticides such as FMC’s new Xyway, which protects corn from a blight called gray leaf spot. A wine glass full of it will protect an entire crop, Shelton pointed out.

Her keynote speech highlighted a joyous night in which the chamber and guests gathered for the first time since early 2020. Last year’s event was online. This year’s was moved from earlier in the year to Monday because of the rise of COVID-19 cases around the holidays.

Because of the move, the winners of last year’s and this year’s Josiah Marvel Cup were not able to attend. That award is given to a person who has made an outstanding contribution to the state.

This year’s winner, Fred Sears, was already in Palm Springs, Calif., for an annual Easter trip. He thanked the chamber via video from there.

Sears retired six years ago from the Delaware Community Foundation, but has continued working with various groups and projects. He spent nearly 40 years in banking, including being president of Commerce Bank Delaware.

He also served as finance director and economic development director for the City of Wilmington and director of the Port of Wilmington, where he signed the port’s first banana contract with Dole Fresh Fruit.

Sears was elected to Wilmington City Council from 1976 through 1984 and has worked in a wide range of other political efforts.,

He has been a member of the board of directors of more than 40 community nonprofit organizations, including the Beau Biden Foundation, ChristianaCare, Delaware Alliance of Nonprofit Advancement, Delaware State Chamber of Commerce, REACH Riverside, Rodel, Wilmington Housing Partnership, and the United Way of Delaware.

In a surprise for Sears, President Joe Biden sent congratulations to his high school friend in a video from the White House that was aired during the dinner.