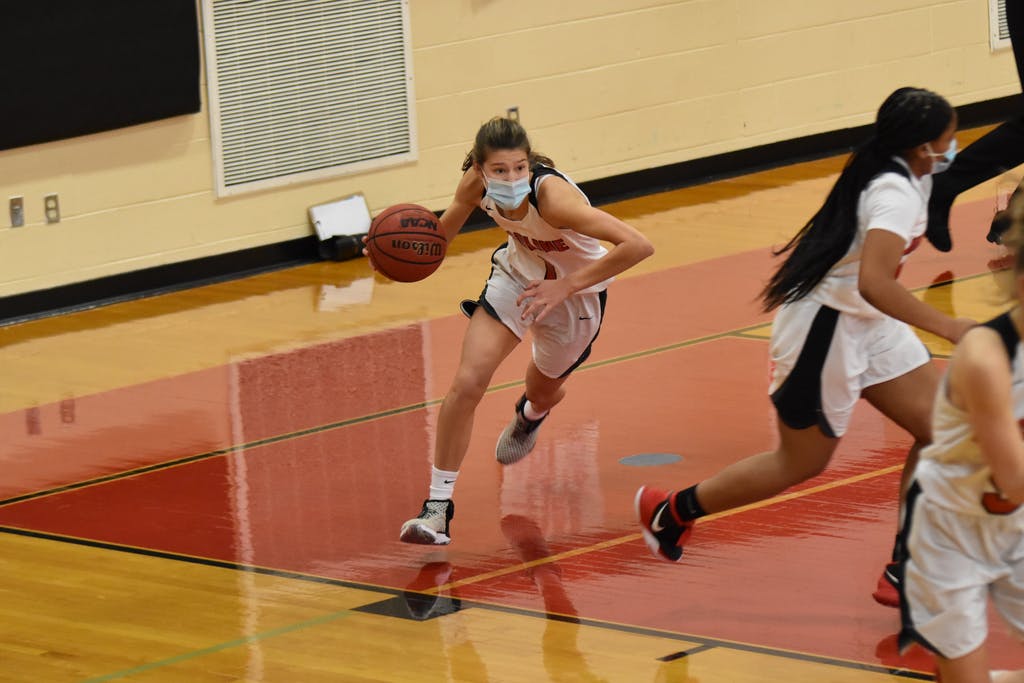 Emily Rzucidlo’s game-high 22 points for Ursuline proved too much for Woodbridge.

The first few minutes of the Ursuline Raiders-Woodbridge Lady Blue Raiders game Saturday started slowly with multiple turnovers by both squads that neither team was able to capitalize on.

Both teams came into the game with a 2-1 record, but with Emily Rzucidlo leading the scoring for Ursuline, the Wilmington academy prevailed and won at home, 51-41.

Things started to pick up at the 4-minute mark  as Ursuline’s zone defense forced the Blue Raiders into another turnover and Emily Rzucidlo for Ursuline came down and drained a three from the corner extending their lead.

The first quarter ended with a 11-6 score in favor of Ursuline as Woodbridge struggled to find openings in the Raiders’ zone and had difficulty getting the ball inside to take advantage of their size under the basket.

Despite the offensive struggles in the half court, the Blue Raiders continued to hang, tough trailing 15-11 at the midway point of the 2nd quarter.

Ursuline, however, continued to force turnovers and push the ball up the court finding open shooters on the wings and knocked down 3 quick threes stretching the lead to 12 points with  1:23 to go in the half.

The half ended with Ursuline up 25-11 with 3 different Raiders making 3 pointers in the half.

Emily Rzucidlo led Ursuline with 13. Ursuline’s zone continued to give Woodbridge trouble throughout the half and completely neutralized the Lady Blue Raiders size advantage in the half court.

The start of the second half saw Woodbridge come out in a zone press forcing the Raiders to turn the ball over on their first 3 possessions. Coach Chad Robinson had made some nice adjustments at halftime, which changed the flow of the game and brought some much needed energy into a quiet Woodbridge team.

The Blue Raiders scored 4 quick points off the turnovers including a layup under the basket on a nice post move by Cha’Kya Johnson for Woodbridge.

However, Ursuline continued to battle and matched most possessions with a basket of their own to maintain a double digit lead through most of the quarter. The Lady Blue Raiders cut the lead to 9 in the last 30 seconds of the quarter with two deep 3 point baskets.

Things slowed down a bit at the beginning of the fourth. For the first time in the game Ursuline struggled to find offense.

Woodbridge scored 7 unanswered points off their zone press pulling to within 2 points halfway through the quarter.  For the first time in the game, the momentum shifted to the Blue Raiders; it looked like Ursuline could lose the game.

But Emily Rzucidlo proved to be too much for Robinson’s team, coming with big basket after big basket including going 6 for  6 from the charity stripe in the fourth.

Ursuline survived a strong second half from the Blue Raiders, improving their record  to 3-1.  Rzucidlo had a game-high 22 points, including 10-13 from the free throw line.