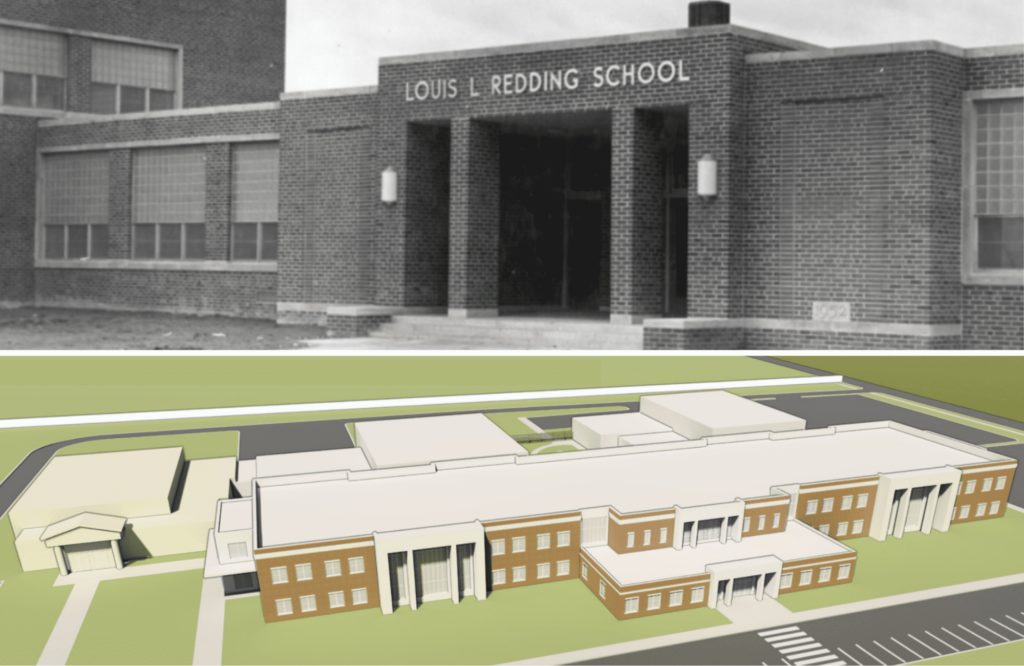 Appoquinimink School District will hold a referendum on Dec. 14 during which voters will be asked to authorize the renovation and expansion of the historic Louis L. Redding Middle School in Middletown.

The referendum is unusual in that a favorable outcome would not result in any tax increases for district residents.

In 2020, the state authorized a certificate of necessity and agreed to contribute the remaining 76% — roughly $43.3 million.

“This gives us the exciting opportunity to provide Redding students and teachers with the learning facility they deserve, to replace temporary trailers with real classrooms, and bring equity to our school facilities –without raising taxes,” an informational packet from the district says.

As a matter of law, before the State will spend the money, the district must pass a referendum to verify that the community supports the project — even though taxes won’t increase.

Dr. Matthew Burrows, superintendent of Appoquinimink School District, said the district set aside the money to avoid a tax increase because the board felt it was “vitally important to give the community and the kids a 21st-century learning environment.”

Built in 1952, Louis L. Redding Middle School served as the only school for students of color living in Middletown, Odessa and Townsend.

In the nearly 70 years since, the school has relied on many components of the building’s original infrastructure, including its electrical and water systems.

The school’s freezer, boiler, water fountains and intercom system all date back to 1952.

As a result, the building has been operating in a constant state of disrepair. The school’s plumbing, roofing, floors, doors, cabinetry, windows and technology have all exceeded their lifespan, according to a presentation prepared by the district.

Leaks in the roof bring water into classrooms, common spaces and offices. Sewer backups, though not an everyday occurrence, have forced wastewater back into the building. Deteriorating floors have buckled in places, creating cracks and sunken areas. The technology needed for communication, learning, and security is not up to the standards of the district and there are not enough power outlets to support the technological needs of a modern school.

Additionally, the school does not have enough space to house all its current students, let alone meet the needs of the district’s rapidly growing population. Many students’ classes take place in temporary modular trailers.

“Along with renovating the building and bringing it up to the standards of a 21st-century learning environment, we also plan to build an addition on the building so we can meet the needs of all students in our community,” Burrows said.

The renovation plans call for a restoration of the school’s original front entrance. The auditorium, which was added in 2006, will also be maintained.

Many other parts of the building will require complete reconstruction.

If the referendum is approved, the project is expected to take three years to complete. Construction will begin in May 2023 and is estimated to conclude in Fall 2026.

In the meantime, Redding students will be relocated to Crystal Run Elementary School. That school is in the beginning stages of construction and sits across from Summit Airport in Middletown.

Burrows said he doesn’t expect overpopulation to be a problem at Crystal Run Elementary, but noted that the area’s rapid population growth makes that hard to predict — even more reason to complete this project now, he said.

“Last year we grew over 550 students,” Burrows said. “That’s almost the whole elementary school itself, so it’s hard to tell but we don’t anticipate that being the issue — but I can’t 100% guarantee that.”

While he doesn’t want to be overly confident, Burrows noted that the Redding community has supported every referendum that the district has held throughout the past 20 years.

“It’s now time to provide opportunities for the students in the community of Redding and the whole district for it to pass,” he said. “So we need our parents and we need our stakeholders to come out and support the Redding community on Dec. 14.”

In a presentation on the referendum, the district warns that if it fails “the issues discussed above – plumbing, roofing, floors, doors, electric, windows, classroom space, technology – will not go away. We will continue to apply band-aids, in the form of expensive repairs, that must be funded 100% locally. Approving a no-tax-increase referendum offers a permanent solution. The district is, essentially, getting a new building for the monies we would otherwise have to spend on repairs.”

Voting will happen on December 14, 2021. Polls will be open from 7:00 a.m.–8:00 p.m. If you live in the Appoquinimink School District, are at least 18-years old, a citizen of Delaware and the USA; you can cast your vote at one of the 10 registered polling places listed below. Be prepared to show proof of identity – a state driver’s license or state I.D.

Registered voters can request a referendum absentee ballot by visiting the voter portal at ivote.de.gov. The Department of Elections sends absentee ballots by U.S. Mail. Delaware Code does not permit electronic delivery or return of referendum ballots.

The school is named after noted civil rights attorney, Louis Lorenzo Redding, who, during his career, successfully challenged discrimination in education, housing, public accommodations, employment and the criminal justice system.