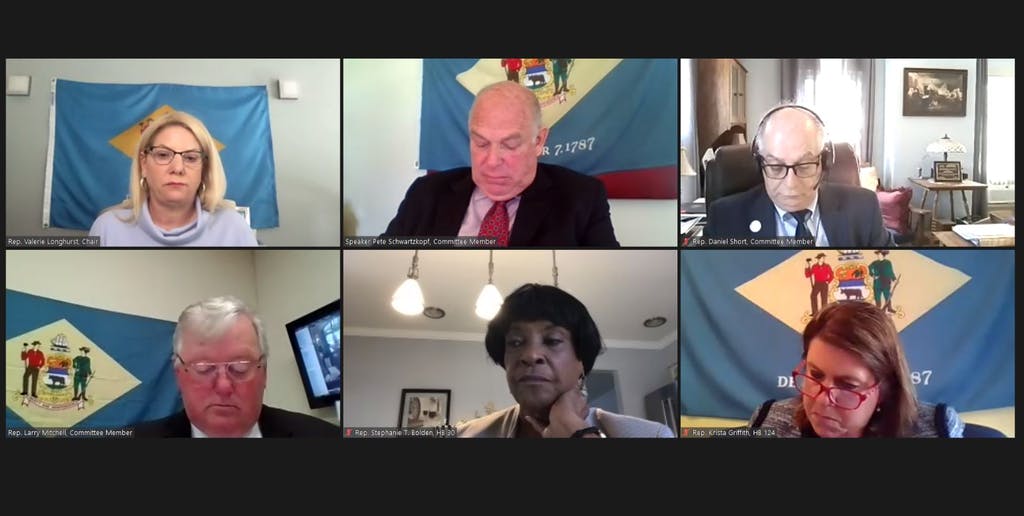 Members of the Delaware House Administration Committee listen to public comment on a bill to move primaries earlier in the year.

Three bills dealing with changes to Delaware’s election rules sailed through the Delaware House Administration Committee like the Nina, Pinta and Santa Maria with a strong tailwind.

The proposed rules would:

The committee also sent to the house floor a bill that will make it illegal for anyone who is the subject of a restraining order from Family Court from purchasing, owning, possessing or controlling a deadly weapon or ammunition for a firearm. It would also ban anyone who is the subject of an outstanding arrest warrant or active indictment related to a felony or misdemeanor crime of domestic violence from purchasing a firearm.

Rep. Stephanie Bolden, D-Wilmington East, pointed out that House Bill 30, which would move the state primary, had already been passed three times but never made it to the agenda.

The state primary now is held in September. Combining it with the presidential primary will save money, she said, as well as give candidates more time to campaign before the November election.

She asked that the bill be dedicated to Elaine Manlove, former director of the Delaware of Elections. Manlove and her husband were killed in a car crash in November.

All the public speakers supported the move, saying it would be less confusing, less taxing on older citizens and allow for more constituent engagement. The bill was approved unanimously.

Rep. David Bentz, D-Christiana, said House Bill 5 would allow the 50,000 to 100,000 Delawareans who are not now registered to vote to be automatically registered whenever they are doing other transactions on licenses or ID cards, or in other agencies that now register votes.

The bill, which was passed by the Senate on a 14-7 partisan vote, would create a backend, passive system that wouldn’t even ask, but would automatically send the information to the Department of Elections.

While most callers supported the bill and believed it will encourage voter turnout and involvement, a couple said that people should have the option to opt out and one said she thought the state needed a better way to clear its voter rolls. She cited her son’s case. He has lived out of state for six years and she still gets voter cards for him telling him where to vote. Another noted that automatically putting people on voter rolls means they are in databases and will get calls and emails from campaigns.

Rep. Danny Short, R-Seaford, said the that he was opposed to automatic registration until the state’s current voter roles and related databases are cleaned up. He was the only committee member to vote no.

Rep. Sherae’a Moore, D-Middletown, said House Bill 90, sponsored by Rep. Gerald Brady, D-Wilmington, would change Delaware campaign laws to mimic federal ones that allow candidates to pay for childcare out of campaign money. The bill is designed to make it easier for parents to be involved in government.

Paying for childcare is allowed in 22 other states and the federal change meant that 51 federal candidates used it, 30 moms and 21 dads. Public comment overwhelming supported the bill. Tracie Johnson of Smyrna  saying she opposed the move because it was like paying yourself for campaigning.

Short asked whether the campaign cash could only be used for the duration of the campaign, or while the person was in office. Moore said the money could be spent as any other campaign cash is. Delaware Director of Elections Anthony Albence said his office relies on self-reporting and doesn’t police how campaign cash is spent. That includes being able to pay for catering and bartenders for an event.

“Well, most of us campaign 24 months a year,” Short said.

Short asked whether the campaign money would be considered income and how that would affect tax deductions for childcare.  Albence and Moore said they didn’t know.

Speaker of House Pete Schwartzkopf, D-Rehoboth Beach, said he has mixed feelings about the bill. He said he could agree that first-time campaigners would need help, but if they won, they would be paid by the state after that.

“I don’t know that we should be putting pressure on newly elected representatives for any office to go out and raise money for childcare,” he said. There’s no federal tax deduction for campaign expenses, but there is one for childcare, he noted.

“I just have a lot of questions about that part of it,” he said. “I do agree with the initial campaign run until you are elected, but after that, I don’t agree with it. But I will vote for it to get it out of commitee.

All the bills will move to the House floor for debate.