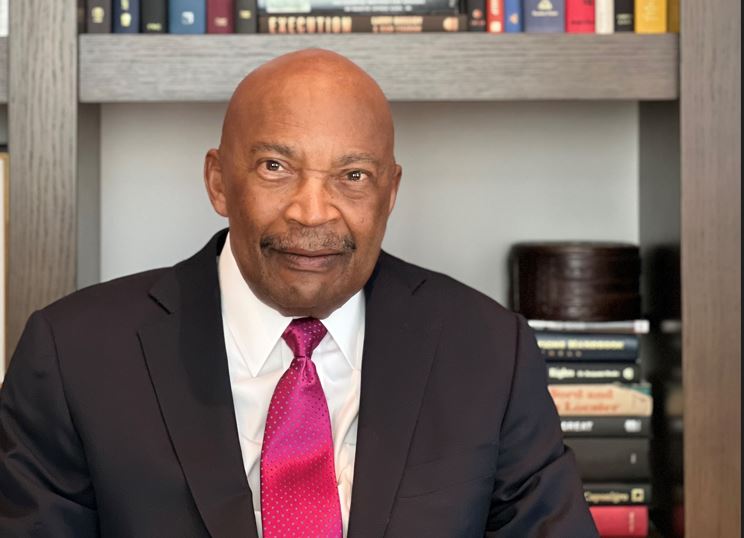 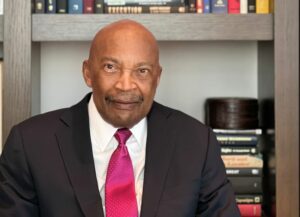 Stacey J. Mobley was given the Delaware State Chamber of Commerce‘s most prestigious award, the Josiah Marvel Cup, Monday during its annual dinner Monday night.

Mobley, who was senior vice president, chief administrative officer, and general counsel of the DuPont Corp., was a champion of using technology-based materials and solutions to transform industries and life as well as being a champion of diversifying the workforce.

The announcement came before a crowd of 1,100 spread out across the Chase Center at the Riverfront.

The Delaware lawyer was hailed in a video by many coworkers and community leaders.

“In my early years, I watched in awe of how he maneuvered very difficult situations and did it with such grace and such a strong center,” said Ellen J. Kullman, a former DuPont chief executive officer.

Many of them talked about how he was a role model and mentor for many people, but was also always a people-first person, asking about them and about their families.

Mobley said he’s never at a loss for words, but was not expecting the awards.

He said he’s been to a number of the chamber’s annual dinners and remembers being impressed by the Marvel Cub winners and what they had contributed to the community.

“I’ve never even thought that I would be joining that list,” Mobley said. “It’s a little overwhelming, but I thank you for this great honor. This is something I will always remember. Delaware’s a very special place and this is one of the events that makes it special, so thank you.”

The Marvel Cup is given to a Delawarean who has made an outstanding contribution to the state, community or society.  It’s named for Josiah Marvel, who reorganized and served as the first president of the State Chamber in 1913.

The names of the recipients are kept secret until the start of the annual dinners.

Mobley, who retired in 2008, joined the DuPont Legal Department in 1972. He was named director of federal affairs in 1983, working in Washington, D.C., and returned to the Delaware headquarters in 1992 as vice president of communications in external affairs. He became general counsel for DuPont in November of 1999.

He encouraged employers to “draw upon the perspectives of people who come from a variety of backgrounds and cultures,” a Chamber press release said.

“He led in diversity, equity and inclusion before we all really knew what it was,” said Thère du Pont, president of Longwood Foundation. “Stacey was the leader in helping DuPont make it a competitive advantage.”

“Stacey is someone that would support you from the background while also willing to mentor you from the front,” said Doneene Damon, chief diversity director at Richards, Layton & Finger.

Mobley served in leadership roles for many philanthropic, educational and policy organizations, including the National Association for the Advancement of Colored People, the U.S. Conference of Mayors, and chairman emeritus of the Board of Trustees at Howard University.

Also Monday night, Dr. David Tam, a pediatric neurologist who is also CEO of Beebe Healthcare, talked about the changes in Delaware since he moved to the state at the start of the COVID-19 pandemic.

One of his first teleconferences about the pandemic came with Gov. John Carney as Tam was driving a loaded U-Haul van with his belongings through Oklahoma on his way from California to Delaware.

It was Tam, a member of the U.S. Navy for 24 years, who suggested the governor use the National Guard to help hospitals when they were being overwhelmed during surges of Omicron infections.

“Sussex County is undergoing tremendous growth as a destination to live, work and visit our truly beautiful region,” Tam said. “This transformation has only accelerated through the COVID 19 pandemic, where everything from the desire to leave more populous areas to the increased opportunities for remote work and study have made southern Delaware a great place to live and visit.”

He said hospital research showed that the county’s population may have grown by 4% in just the last two years.

“And if you’ve driven through Sussex County, you know that that’s probably true,” he said.

More people are coming, he said, and with that, more industry, more commerce and the people needed to work in many areas.

Beebe has responded by opening more clinics and offices. It recently won state approval to build a new hybrid emergency center and pediatric service in Millsboro, which he called “the new Middletown,” referring to the south New Castle County town that has mushroomed in the last 20 years.

During the past three years, he said, Beebe has recruited more than 200 physician and advanced practice providers to Sussex County, as well as the professional staff needed to support them. Itr’s increased class sizes at its nursing schoo9l and will start a family medicine residency this summer.

“It is my steadfast belief that the best health care is community based by serving our community, being being guided by our community, and even building a community of health care professionals that are all committed to taking care of our friends, families, neighbors and visitors,” he said.