Delaware State University president Tony Allen has promised an investigation into an April 20 incident during which a bus carrying the school’s women’s lacrosse team was pulled over and searched while returning from a tournament in Florida.

DSU is a historically Black university in Dover. Approximately 70% of the student population is Black.

According to The Hornet, DSU’s student newspaper, the contracted bus carrying the team was pulled over in Georgia after traveling in the fast lane of the highway, which buses are not allowed to do, officers said.

Officers then boarded the bus and told the student-athletes they would conduct a search of their luggage for narcotics.

“Why I’m coming on the bus right now is to tell you we’re gonna check y’all’s luggage,” an officer is recorded saying. “If there is anything in y’all’s luggage, we’re probably going to find it, OK? I’m not looking for a little bit of marijuana but I’m pretty sure you guys’s chaperones is going to be disappointed in you if we find any.”

“You guys are on a lacrosse team, correct,” the officer asks the women. “If there is something in there that is questionable, please tell me now, um, because if we find it, we’re not going to be able to help you. You are in the state of Georgia. Marijuana is still illegal in the state of Georgia. Anything that you can put marijuana in, maybe a device that you smoke it, maybe something that you could weigh it – a set of scales or anything. If there’s nothing then I’m thankful. That’s going to make my job a lot easier to get this done.”

Officers then asked the bus driver to open the luggage compartments. A K-9 unit was called in to perform a sniff search, according to The Hornet.

No narcotics were found.

“To be clear, nothing illegal was discovered in this search, and all of our coaches and student-athletes comported themselves with dignity throughout a trying and humiliating process,” Allen said in a Facebook post Monday. “Our student-athletes, coaches, and the subcontracted bus driver are all safe.”

In a statement Monday, Carney said the video is “upsetting, concerning, and disappointing.’’

“Moments like these should be relegated to part of our country’s complicated history, but they continue to occur with sad regularity in communities across our country,” he said. “It’s especially hard when it impacts our own community.”

Carney assured Allen his office “will do everything we can to assist the University with learning more about the incident and any appropriate next steps.”

“I’m proud of our students for handling the experience with remarkable composure, though I’m sorry they were made to go through it at all,” Carney said.

Along with the university’s legal counsel, Allen said he also reached out to Georgia law enforcement.

Allen said he is now exploring all options available for recourse, “legal and otherwise.” 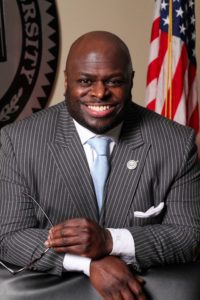 “We do not intend to let this or any other incident like it pass idly by. We are prepared to go wherever the evidence leads us. We have video. We have allies. Perhaps more significantly, we have the courage of our convictions.”

Allen said in the wake of bomb threats made against HSCUs in Jan. and Feb. 2022, it is clear that “personal nobility, individual virtue, and communal excellence do not exempt us from oppressive treatment.”

“However, as I said in January, we will never be bullied into believing anything other than what we are— Americans, learners, teachers, builders—useful and honorable people ready to soar,” he said. “I am proud of our student-athletes, their coaches, the athletic department leadership, and the reporters and staff of the University newspaper. Our mission is a critical one and is as much a part of the American story as any.”

Delaware LIVE News has not yet determined the agency involved in the stop and will update this story as it evolves.