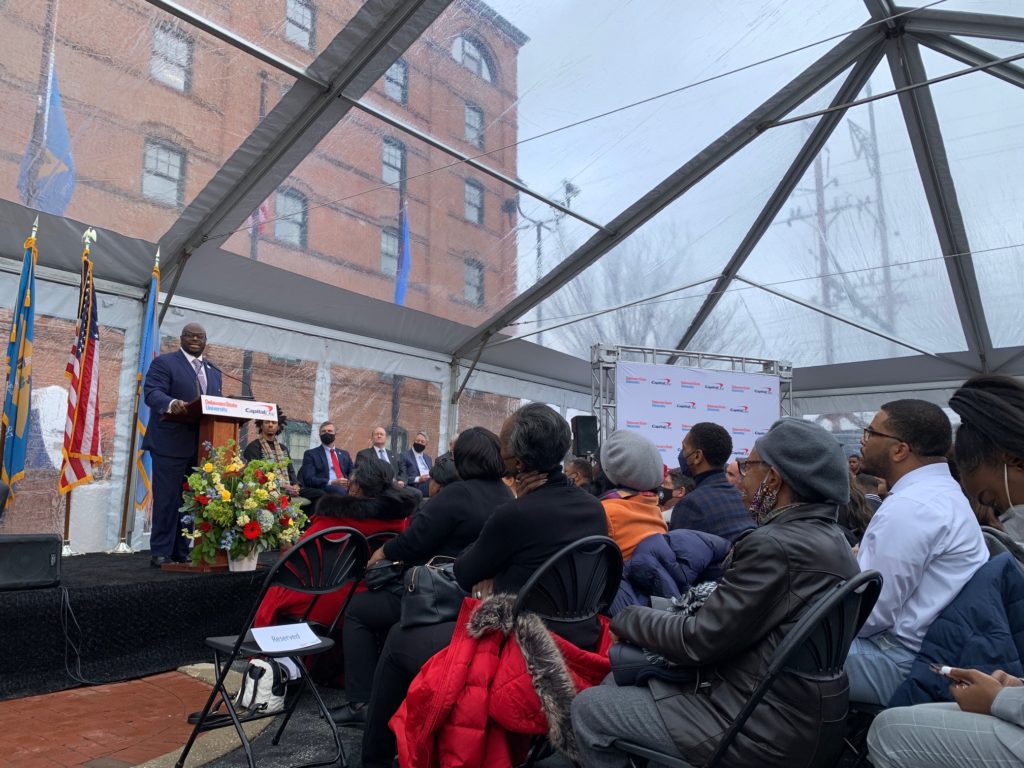 DSU President Tony Allen talks to an overflow crowd at the formal opening of the school’s riverfront building.

Dr. Patrice Gilliam-Johnson, dean of graduate and adult studies at Delaware State University, stood on the sixth floor of the school’s new riverfront building, pointing out the Wilmington train station next door.

“When people get off the train, they’ll see Delaware State University,” she said Friday as a crowd of officials descended on 1 S. Orange St. to cut the ribbon for DSU’s fifth campus.

The focus of all the attention was a $4.7 million former Capital One facility that the bank donated in August to Delaware’s only Historically Black College and University.

DSU will move its School for Graduate, Adult, and Continuing Education, which as grown under Gilliam-Johnson from about 250 students to 1,000, into the 35,000-square-foot building.

It also will house an Apple program designed to  help students succeed, a new partnership with the Teen Warehouse, the university’s workforce development center, and an incubation hub for micro and small businesses with a particular focus on minority and women-owned companies.

Ultimately, though, the building is about jobs, said Delaware Congresswoman Lisa Blunt Rochester, who wore DSU Hornet colors in a bright red suit with a bright blue shirt.

“This is about strengthening our economy. This is about making us competitive around the world. This is about building wealth, and generational wealth, and creating businesses,” she said. “But don’t get it twisted. This ain’t just a building. This is our today upskilling, reskilling workforce development,  and it starts tomorrow.

“This is about not just Hornets rising, not just Delaware rising, but all of the United States of America rising.”

She also hinted that an announcement about a Sussex campus may be coming, but said she wouldn’t give any spoilers.

The opening of the building was hailed as DSU’s return to downtown Wilmington. It once had a presence on Market Street.

Much of the speeches by dignitaries focused on pride in DSU, its growth and the creation of opportunities for its students. Sen. Chris Coons pointed out that the event was taking place as President Joe Biden was announcing that he was nominating the first black woman, Judge Ketanji Brown Jackson, for the Supreme Court.

The new DSU building and surrounding area hold a lot of Delaware history.

The last stop on the Underground Railroad was in the area, pointed out DSU President Tony Allen. Abolitionist Thomas Garrett lived nearby. 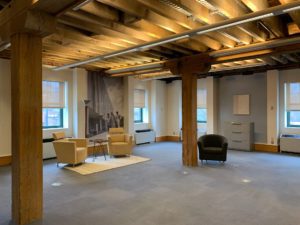 The interior takes advantage of its 35,000 square feet and the wood and brick accents. 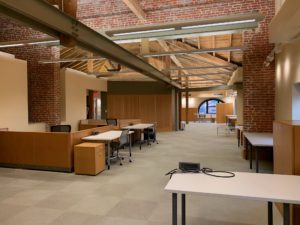 When the building was refurbished for ING, they liked the wood beams. 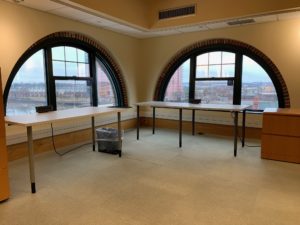 Dean Patrice Gilliam-Johnson said she’d like to have her office in this space, with its great views.

Built in 1885 and used as a warehouse, the building was refurbished two decades ago for ING, the Danish bank that was a world leader in internet banking. It became one of the first occupied buildings in the redevelopment of the Wilmington Riverfront.

Its gothic brick front, considered fashionable when it was built, is still striking.

Architect Jim Tevebaugh said the Danes wanted open spaces people could freely converse, and they liked the natural brick and wood already inside.

Inside, the curves of the windows and their views of the Christina River and the city, interjected by wooden beams and brick columns, create a modern, airy feel rather than seeming like a staid box. Those beams were black when ING found the building, but were returned to their brown beauty, as was the flooring. Floors 1, 2 and 6 feature groupings of work spaces and furniture set up in arrangements designed to spur conversations.

DSU’s Riverfront campus is expected to serve as a pipeline for talent for Capital One.

Capital One Delaware Market  President Joe Westcott, who said he started his own career on the fifth floor of the building, announced that the bank is expanding its recruiting relationship with DSU.

It’s also launching an executive mentorship program with Capital One executives and DSU sophomores, providing $270,000 for DSU to use in its internship and work experience programs, extending skills training programs and its First Gen program designed to help students who are the first in their family to go to college.

“I know this next chapter will continue to grow the next generation of business leaders of the community,? Westcott said, “and I just could not be more proud to stand here amongst the future occupants of this building and the visionary leaders who brought us to this point.”

Allen touted the building as a launching point into the future that will not only help students earn a degree, but also help them find jobs.

“Capital One has not just given us a building,” he said. “They’ve given us a gift across time, across races, across classes, across educational barriers and towards a more perfect union for us all.”

Delaware Gov. John Carney said the Riverfront campus would be a beacon for Wilmington students.

“It will be something they can look at and say, ‘I can do that,’ and I could go work for Capital One after doing that,” Carney said, “and it just opens up a world of possibilities.”

Wilmington Mayor Mike Purzycki said, “Cities need meds, beds and eds. We’ve got meds and beds, but, damn it, we finally got eds.”

The event ended with proof that the school may need to start a Ribbon Cutting 101 class.

With dozens of state politicians crowding in for a photo, Allen had such a hard time cutting the wide red ribbon with an unwieldy two-foot long pair of scissors that Purzycki took them out of his hands and did it himself.