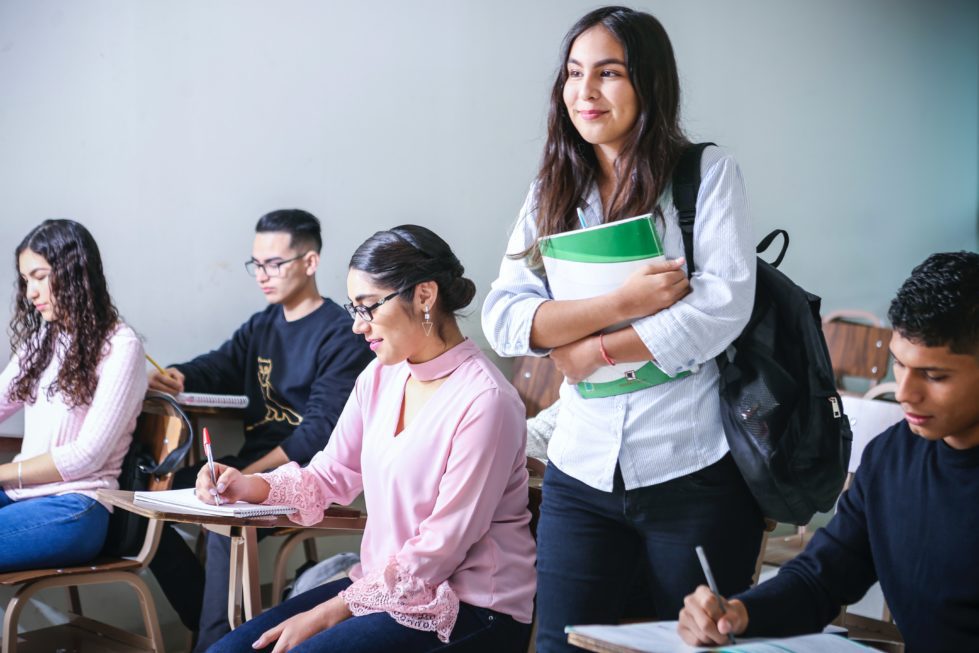 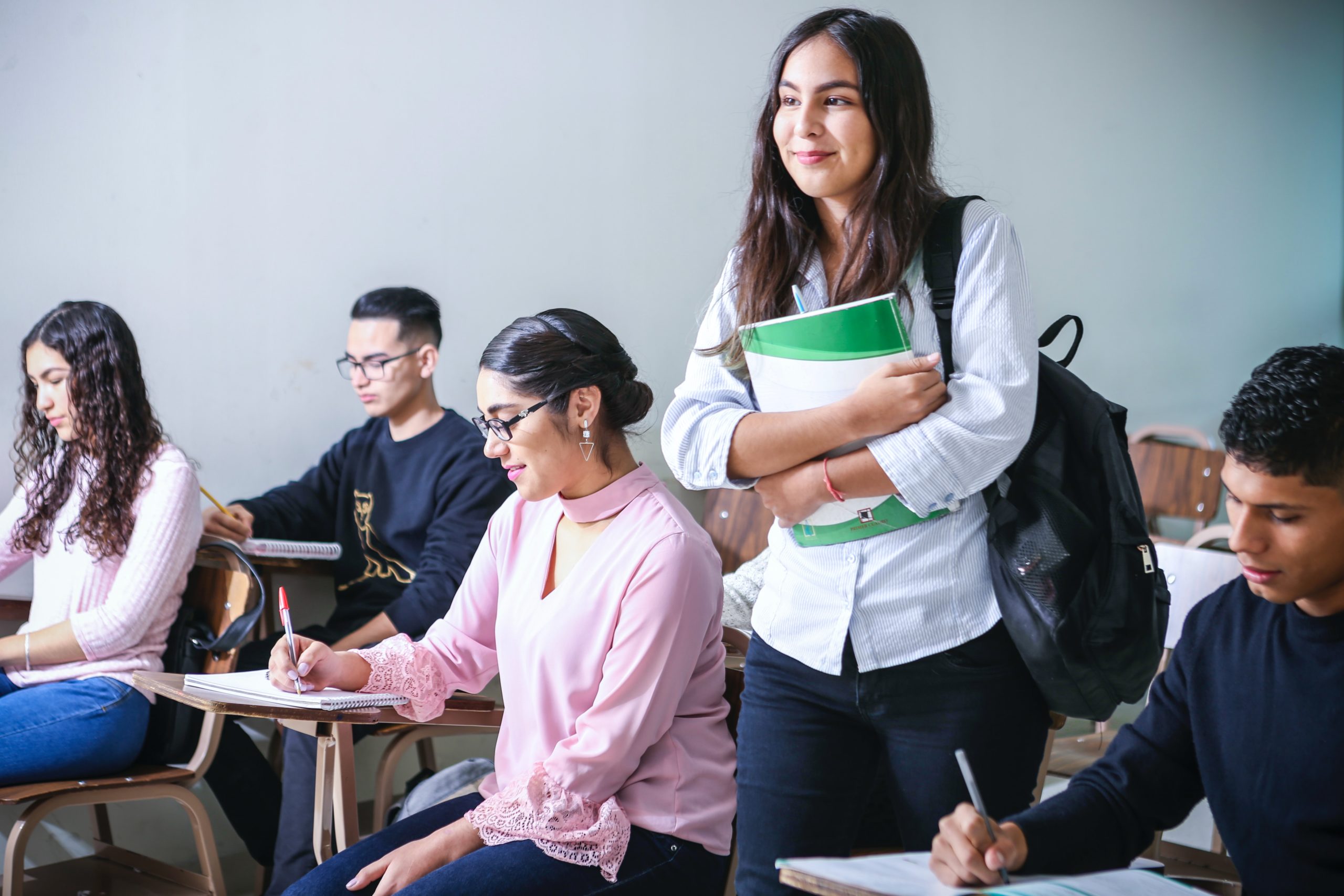 Kelvin Addy needed a push to make it into William Penn’s 2014 graduating class.

Now he’s working for one of the organizations that helped him get his diploma, helping today’s students succeed and closing a circle that began with Colonial School District’s novel dropout prevention program.

Since the program’s implementation in 2012, graduation rates have spiked and dropouts have plummeted.

At the time, the dropout rate at the school was 7% and the graduation rate was 74%.

As of 2021, the last year that Colonial has a complete dataset, the dropout rate fell to 1.7%, and the graduation rate leaped to 83%, even with the pandemic chewing on resources.

The idea for the program came in 2005, when Jeffrey Menzer, then principal of William Penn High School – the district’s only high school – noticed that the system did not have a great track record of seeing its students through to graduation.

He thought that ought to change. 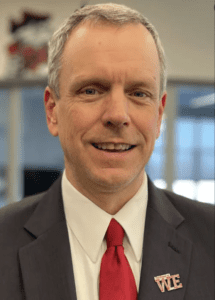 The district needed to focus on keeping the kids coming to school, helping students with academic and emotional support, and even tracking their classes to make sure they were taking and passing the correct classes to get the required graduation credits.

Menzer went to Murray Berstein, then chief executive officer of Nixon Medical Services, who was also passionate about students staying in schools so they have a gateway to college and future endeavors.

“Look, why don’t you get a bunch of business people together who want to tell a principal how to run a school, and we’ll bring them in,” Menzer said to Berstein. “We’ll meet regularly and talk about the challenges a principal of a high school faces and maybe we can do something, and we can focus on dropout prevention because that’s what you’re passionate about.”

But Menzer needed $52,000 to hire two Communities in Schools employees.

Bernstein, WSFS Bank in Wilmington and Chris Kenny, CEO of ShopRite joined forces to raise the money. (Kenny is the owner of Delaware LIVE News).

“The CIS workers really just end up being an added resource for our school in terms of climate, counseling, and guidance,” said Menzer.

This past weekend, the state published its annual dropout and graduation report. The data comes from the 2020-2021 academic year.

Those numbers have been consistent since the state began publishing these reports in the 2014-2015 school year.

The graduation and dropout rates are more than numbers, and behind these figures are real students whose futures will be impacted greatly by whether or not they complete school and earn their high school diplomas, said Secretary of Education Mark Holodick.

“I’m proud of the teachers, counselors, school leaders and community partners who work every day with students and their families to help our young people stay in school, make up credits and graduate so they are poised for success in postsecondary education and/or careers,” he said.

This is a prime example of a district in our state showing what is possible by acting together to solve a complex problem, she said.

“The leadership at William Penn High School acknowledged their crisis, gathered community resources beyond the walls of their building, invested time and focus, and have realized positive, concrete results over several years,” she said. “Kids can’t wait.” 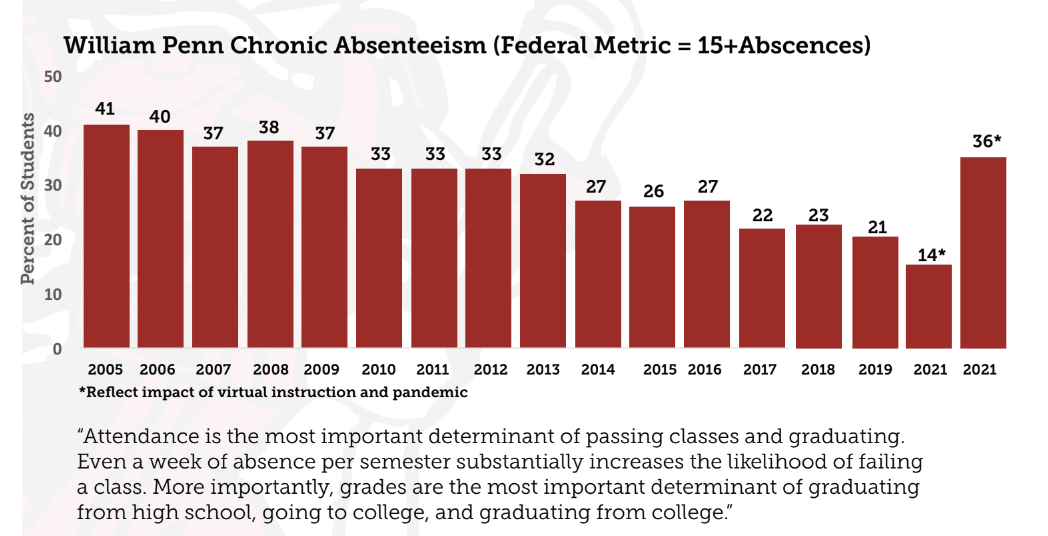 According to multiple studies, attendance is the most important determinant of passing classes and graduating, Menzer pointed out.

Chronic absenteeism, defined by the federal government, is when a student misses 15 or more school days in an academic year. That absenteeism often has roots in what’s going on at home.

“Data was a little spotty because of the pandemic,” said Menzer, but in 2019, the school had a chronic absenteeism rate of just 21%, meaning 79% of students were absent for less than 15 school days in a single year. 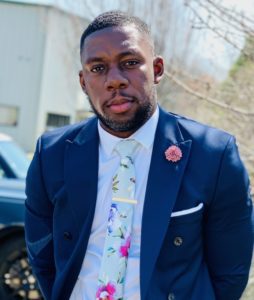 Kelvin Addy said his graduation was a byproduct of the work and support of the hired workers.

He said the two workers he dealt with had a tremendous impact on his life and his ability to graduate, specifically helping him with lessons in Spanish, something he struggled with in school, and also providing counseling services.

“They checked in with me all the time to make sure I was doing my work and turning it in on time,” he said. “Especially around senior year, since it was crunch time, they were heavily involved to make sure I made my way across the stage.”

Addy said that the significant dip in dropouts and spike in graduation rates proved that Colonial’s efforts are paying off.

“It’s coming to fruition,” he said.

Addy now is the Communities in Schools site coordinator at William Penn, where he hopes to build on the success of the program.

How they did it

In 2012, before the funds were available for Communities in Schools workers, Murray Berstein created the Graduation Advisory Board at William Penn High to help kids graduate.

That board’s bottom line is that students who don’t earn a high school diploma are going to live less productive lives, said Menzer.

The board initially had four members, but has since grown to 14, as the district continues to prioritize getting its students past the finish line.

The role of the Schools workers is to be a support mechanism for the students, while also being mentors and providing help to individuals who might be struggling either academically or behaviorally.

“Even if its family issues, the CIS workers are in the building to address whatever is causing challenges for the students,” Menzer said.

One issue is homelessness.

“The workers help us navigate finding those students temporary and/or permanent housing so that they can continue their education,” Menzer said.

Typically, that means connecting students with different agencies to find a hotel to stay at temporarily, while the district works with the Housing Authority to get those students housing vouchers.

While less directly correlated to academics, the workers also connect students with food banks and other community service events to encourage them to give back.

The Schools workers run lunchtime  programs, during which students will have lunch and tutoring sessions, sometimes with tutors brought in from outside.

During these lunch sessions, workers allow students to have a seat, eat and talk about different peer to peer relationship issues that they might be having.

The Schools workers aren’t entirely on their own. They are woven into the system.

When students are identified as missing a credit or needing to recover a credit, the school counselor works to get that class on their schedule.

The Communities in Schools worker who’s managing a student’s case not only helps them pass the class, but monitors other aspects of the student’s life and graduation requirements.

“It’s one thing to get that credit recovered, and it’s another thing to make sure they don’t fall off somewhere else and need to repeat this cycle,” said Menzer.

“Actually touring a campus allows these kids to have something to look forward to and motivates them as they finish their high school years,” said Menzer.