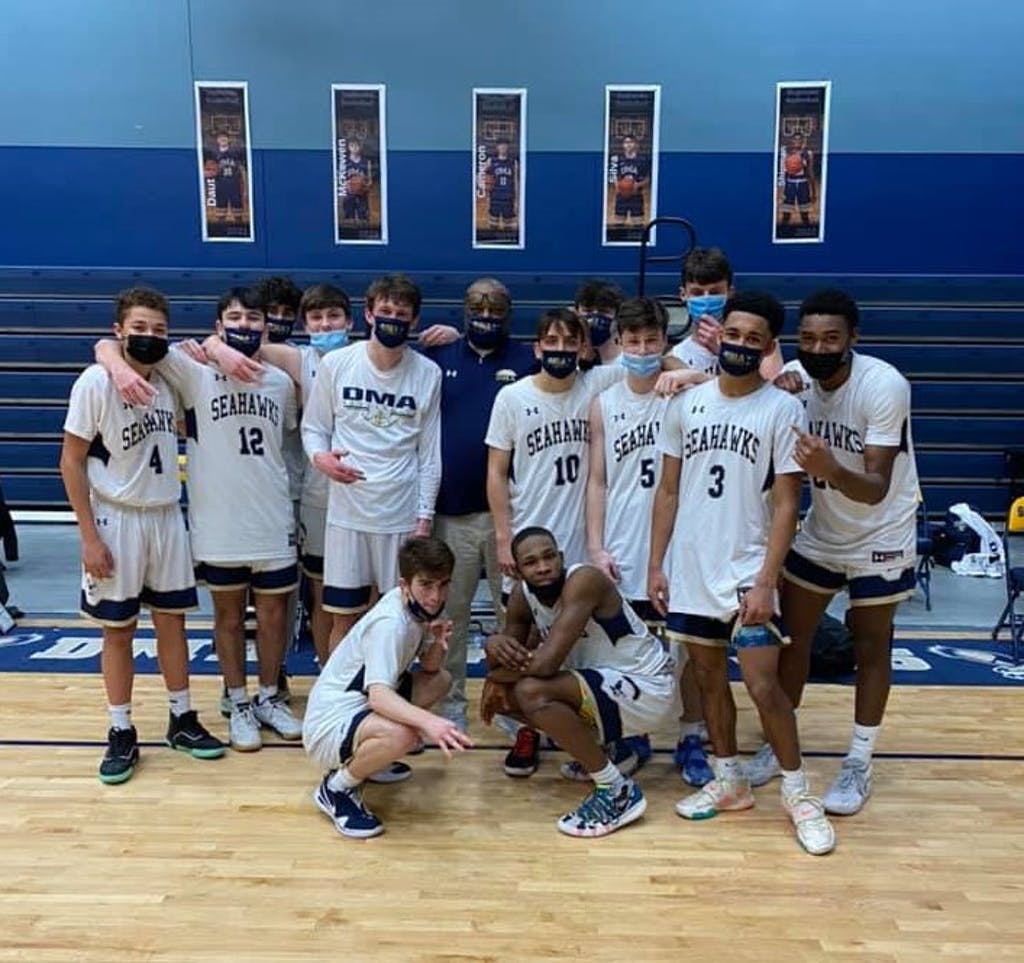 The DMA Seahawks came into the DIAA Boys open basketball tournament as the #22 seed and they welcomed #43 Newark Charter in the first round on Tuesday night. A rematch of a 13 point win the Seahawks claimed earlier in the year over the Patriots, but this time it was win or go home.

DMA got out to an early 9-1 lead in the first quarter and never looked back, finishing the quarter with a 13-5 lead. Newark Charter struggled to score the basketball early and DMA moved the ball very well, finding open shots and knocking them down. On the other side of the floor the Seahawks did a great job defensively, forcing the Patriots into tough shots and absolutely dominating the glass.

Our goal was to come out and played together and rely on our defense, we did that and the boys stepped up,” DMA Coach Phil Hill said after the game. “Back in the lab tomorrow to get ready for Caravel.”

Senior Brendan McKewen helped lead the way for Seahawks, finishing with 13 points in the first round win. “We wanted to get up and down and run the floor, use this game as a building block moving forward, just to be ready for whoever we have to play in the tournament.”

The Seahawks started the second quarter with another big run of 11-0 and from there were able to put on cruise control the rest of the way, leading 35-15 at the half. They would go on to finish off Newark Charter 63-32. Newark Charter Senior Jared Michoma led the way for the Patriots with 13 points and DMA was led by Junior Zach Johnson who finished with 22 points. Jordan Green and Khyaire Hines chipped in with 8 points each.

Next in line for the Seahawks will be that #11 seed Caravel Buccaneer team, a squad that got the better end of the matchup in early February with a 72-62 win over DMA.

“Our focus on Thursday is what we have been doing all year, play defense and play together. We have a big challenge in Caravel, but these kids feel it, they are hungry and they know we have some unfinished business.”

If the Seahawks are looking for an upset victory they will have to improve in some areas that they fell short in last time around. “We had some turnovers and we weren’t making our foul shots,” said McKewen. “This time we will be prepared and not turn the ball over, it should be a good game and I’m looking forward to it.”

#11 Caravel meets #22 DMA on Thursday, March 4 at 6:30 PM at Caravel Academy in the second round of the state tournament.