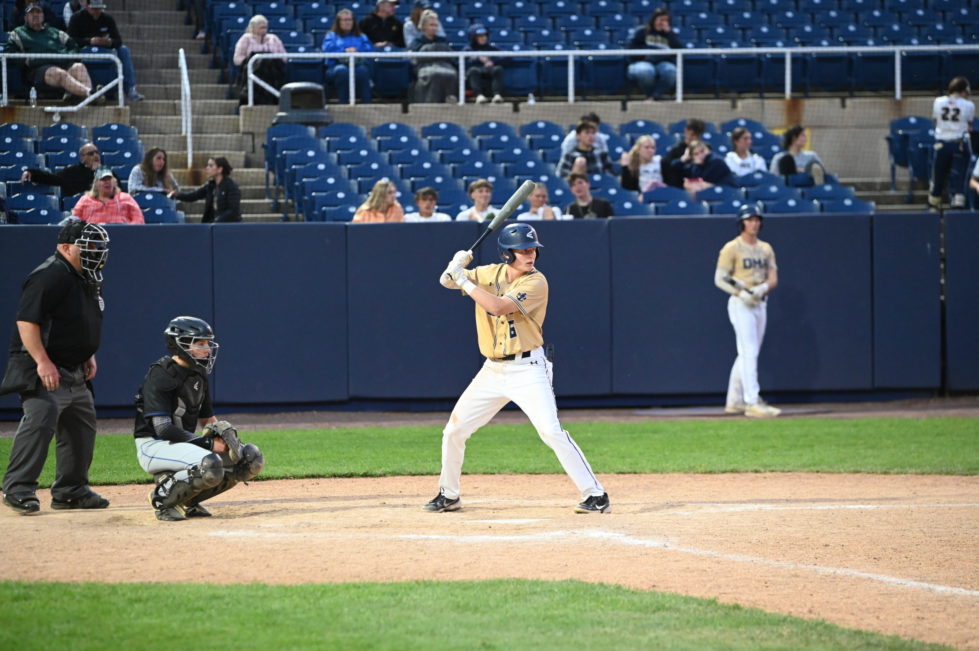 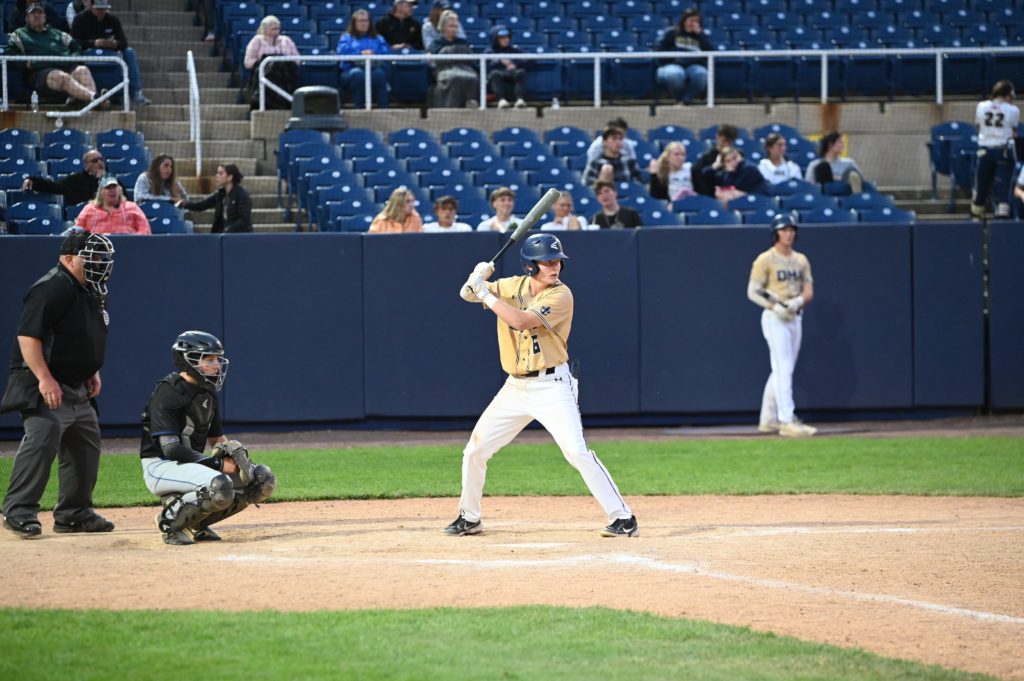 Drew Simpson of DMA went 2-4 scoring a run and knocking in one, photo by Nick Halliday

The No.6 Delaware Military Academy (DMA) Seahawks hosted the Charter School of Wilmington Tuesday night at Frawley Stadium. In a pitcher’s duel the Seahawks trailed 1-0 late in the game during the Diamond State conference matchup.  The Seahawks finally got to Charters’ pitcher, scoring two runs in the bottom of the fifth to complete the comeback victory 2-1 over the Force.

Charter broke the 0-0 tie in the top of the third inning. With two outs in the inning, Justin Terranova hit a single back up the middle. Tyler Kreps then stepped to the plate and hit a hard ground ball to short that hopped over the glove of Drew Simpson and into the outfield. Terranova was able to round the bases on the error giving the Force a 1-0 lead.

Each team received strong pitching performances from their starting pitchers.  Junior Logan Wiley from DMA and Sophomore Brady Harach from Charter both pitched four strong innings. The only run in the game to this point was unearned. Both starters scattered four hits, as Wiley struck out seven batters, and Harach struckout eleven batters. It wasn’t until the fifth inning that either pitcher would surrender an earned run.

In the bottom of the fifth inning the Seahawks finally got to Charters’ starting pitcher Harach. Jackson Dorsey reached safely with a walk on four straight balls from Harach. After Dorsey steals second base, Drew Simpson redeemed himself from the error back in the third inning as he drove a line drive deep to left center for a double scoring Dorsey from second base. Harach then walked the next two consecutive batters Tyler August, and Luke Burdett to load the bases.

After the walks Charter would make a pitching change as Justin Terranova relieved Harach inheriting the bases loaded and one out. Logan Wiley then helped himself as he popped up an 0-2 pitch that fell in between a couple Charter players in short right field scoring Simpson from third to give the Seahwawks their first lead of the game which also proved to be the game winning run as well.

Wiley was then relieved after the inning giving way to Drew Simpson on the mound. Simpson would shut down the force going 1,2,3 in the sixth and seventh innings. He recorded six straight outs with five of them being strikeouts enroute to the save. WIley would get the win for the Seahawks.

Simpson led DMA at the plate going 2-4 scoring a run and knocking in one. Sean Bogan and Tyler August each added a hit.

Justin Terranova, Samuel Lefton, Brendan Craig, Max Aukamp, and Justin Hahn all had one hit a piece for the Force