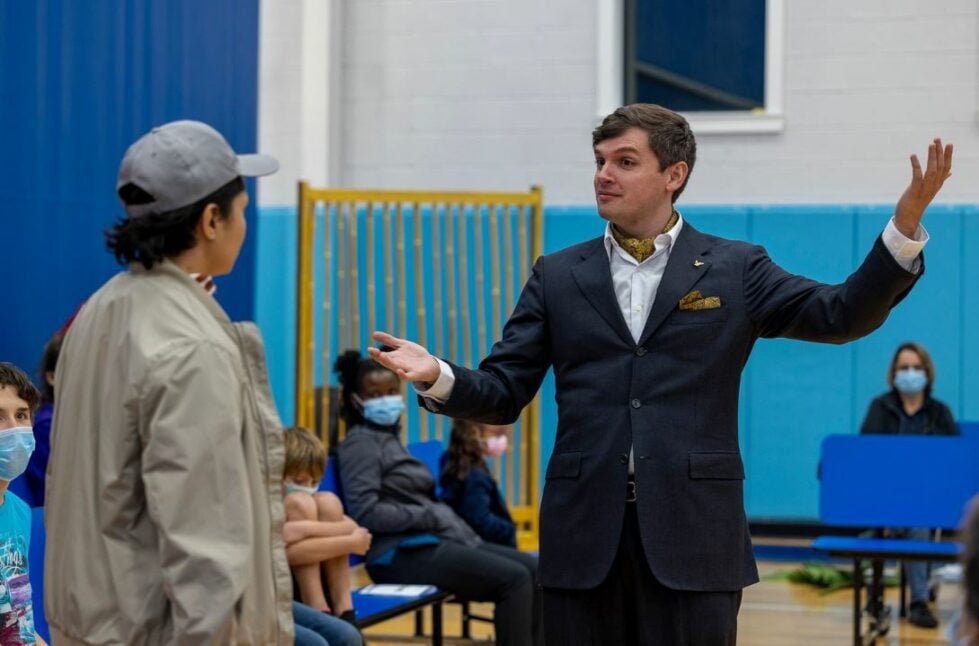 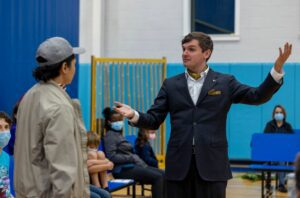 Three years ago, Delaware Shakespeare decided to stop out on a ledge and produce a musical version of “Twelfth Night” for its 2020 community tour.

Then writer Liz Filios of Philadelphia had another inspiration: What if the musical was also bilingual, partly because they have Spanish-speaking audience members?

Go for it, DelShakes Executive Editor David Stradley told her. They asked director Tanaquil Márquez to help because Filios is not a native Spanish speaker.

“Initially, we were just going to include some Spanish language elements. As they really started thinking about how to do that authentically, it was also mid-2020 and the country was wrestling with these issues of racial justice,” Stradley said.

“And they said, ‘Why don’t we go to making this a story about immigration? Because the plot of ‘Twelfth Night’ is about two twins getting shipwrecked in a new land and having to make their way, so it went from just including the Spanish language elements to really making this an attempt to celebrate the stories of Latino immigrants and encourage people who are watching this musical to try to take some take some action to improve the situation for immigrants in the U.S.”

The Covid-19 pandemic knocked the production off the boards until this fall.

But now, the show’s triumphant four-week tour of Delaware libraries, senior centers, schools and detention centers will end with ticketed performances this weekend at the Siegel Jewish Community Center with shows Saturday night and Sunday afternoon. 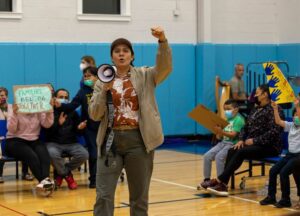 There’s a bonus for those who want to go: Ticket prices of $25 for adults and $18 for youth are plowed right back into next year’s community tour. Get them here.

DelShakes’ community tours are designed to bring the Bard to communities that may have little exposure to his work. Actors say the productions, usually presented in the round, offer experiences they rarely get, with audience members sitting feet away commenting on the action directly to them.

With the musical numbers split between English and Spanish, and the dialogue about 75% English, audiences told Delaware Shakespeare that they had no trouble following the action.

Jennifer Kramer of PlayShakespeare.com wrote “the transformative work urges the audience to reach across the borders of different cultures and seek one out themselves – to literally transform the world. By staying in conversation with the Bard, Delaware Shakespeare delivers a powerful message in any language.”
Gail Obenreder of BroadStreet Review praised the director.
“The play’s charm and breadth of spirit, as well as its clarity and forward motion, are due in great part to Márquez, who cleverly and thoughtfully directs this production with warmth, wit and a sense of inclusiveness,” she said. “Though it’s more than two hours long, the show flows swiftly and joyously.”
The production included 25 songs and pulled the audience in partly by asking them to do things like hold protest signs during one scene, which Obenreder said many were enthusiastic about.
“Everyone just finds the music incredibly beautiful,” Stradley said.
Robi Hager, Patricio Hidalgo and Ximena Violante also contributed to the music. 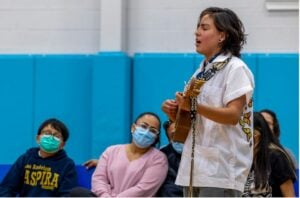 Violante, a composer and performer, included pieces tied to the Mexican tradition of folk music known as Son Jarocho, including one of Filios’s favorites” “El Compromiso.”
“‘El Compromiso’ does not mean ‘Compromise’; it actually means ‘Commitment,'” Filios said. “I love the conversation that the characters of Feste, Violeta and Orsino have around this song in the play, exploring an immigrant’s commitment to both their past, and their future.
“It’s a beautiful unfolding of the many layers of the migrant experience, and an incisive way to educate people like Orsino, who have been privileged to live in the same place their whole life and can only understand an immigrant’s experience – their courage, passion, sacrifice and commitment – from the outside looking in.”
Stradley said one of his favorite moments came early in the tour at the Lewis Dual Language Elementary School in Wilmington.
The principal there found out that two of the main characters are from Venezuala. She called her cousin, who is from Venezula, and told him to come quickly. He arrived about 10 minutes late, and was immediately sucked into the language, Stradley said.
“He was chanting along with some of the protest scenes and smiling and nodding along at some of the Latin music and by the end was wiping huge tears off his face,” Stradley said.
After the show, the man found a couple of the native Spanish speakers in the case and told them how much he loved it.
“You know, the community tours are about connecting theater and Shakespeare to people who think they might not have a connection to it,” Stradley said. “And to see this gentleman just kind of openly talking about how much this production meant to him when he hadn’t even heard about it 10 minutes before it started just kind of proves to us that it is working.”