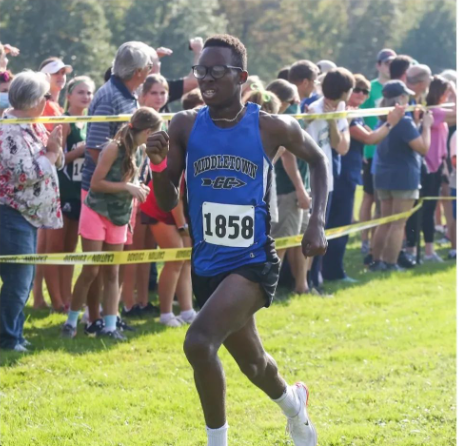 It was “unseasonable” Autumn weather for the New Castle County and Henlopen cross country meets over the weekend. The New Castle County meet was held at Winterthur while the Henlopen race took place at Killens Pond, the site for the upcoming state championship meet on Saturday the 12th.

won the boy’s race at Winterthur in a time of 16:09.44, followed by Ethan Walther from Delaware Military. Walther was just 13 seconds behind Drew. The Cavaliers finished in second place with Salesianum winning the team title, and DMA rounding out the top three.

The Henlopen Conference race winners were Ryan Baker from Cape and Brynn Crandell of Indian River.

Baker won the boys race by nearly :30 over Chase Sims of Indian River. His time was 16:26.9 to lead the Vikings to the team title. Max Gillen of Cape was 5th, Liam O’Donnell came in 7th, just ahead of Joey DeGregory who took 8th. Cape’s team score of 37 was just six points better than Caesar Rodney’s 43. The Riders were led by Ian Cain (4), Maddox Downs (6) and Griffin Spana (10).

Crandell won the girls event in a time of 19:02.5, finishing just over a minute ahead of second place Katie Kuhlman of Cape. She will certainly be one of the favorites in Saturday’s D-2 title race at Killen’s Pond.

Sussex Academy won the team title with a score of 52. Caesar Rodney came in second with a total of 66, while Cape was third scoring 84 points. The Seahawks were paced by Katya Geyer (3rd), Lily Bowe (5th) and Kasi Showers (10th). The Riders took 7th, 8th and 9th with Bree Talley, Dreux Lail, and Mary Villareal leading their team on the day.

The State Championship event should be awesome as Baker (Cape), Drew (Middletown) and Miller (Salesianum) should be favored in the D1 event, and in D2 look for Etan Walther (DMA) and Chase Sims (IR) to be the front runners (no pun intended). The Sals will be favored to win the D1 team title with good competition from Middletown, CR and Cape. In D2, we’ll keep an eye on DMA and see which other team can challenge for the championship.

In the girls race, we will have to see if anyone can catch the Padua Pandas, winners of 9 straight team titles, while D2 should be an interesting event as Saint Andrews, Archmere, Conrad and Sussex Academy all appear to be strong.

The full race results can be found at www.de.milesplit.com.