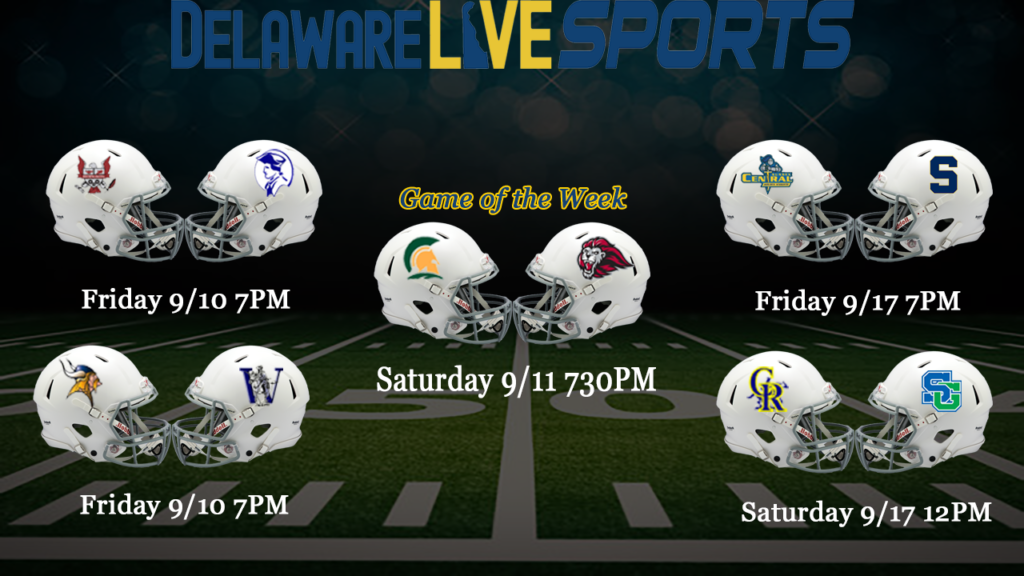 This Wednesday we are going to have our first show with guests in over 2 years. Delaware Live Weekly is our weekly show that covers all of Delaware high school sports with game recaps, scores, top rankings & everyone’s favorite top 10 plays. This week we have Red Lion Christian Academy football team and St Mark’s Football team as our guests as we talk to them about their game this Saturday night our Delaware Live Game of the Week.

Hodson makes the trip down to Dover to take on the Senators on Friday night at 7PM. Hodgson is coming off a 20-7 win over Caesar Rodney. Hodgson played its first game in 4 years without Gatorade player of the year CJ Henry who is now at Delaware State. Jacob Barker is now at the helm and they still have the dangerous Joshua Ames. Dover is coming into this season with a new coach Chip Knapp who was at Wesley for over 30 years and the head coach for the last 3 years. He is now the head coach for the Senators. He will have returning his starting quarterback Jordan Moran and the University of Delaware commit Elijah Sessoms who is a problem on both sides for the ball.

Sussex Central the reigning state champs are coming into their second game with a 20-0 win over William Penn. Central played their same game they have for years as Coach Wells ground and pound offense and stingy defense. After losing some key players from last year championship team coach Wells found a few more as Andrew Long a Junior running back scored 3 and on the defensive side of the ball Kevon Moore-Briddell recorded two sacks. Salesianum is coming off a 28-20 victory over Cape Henlopen. Last year injuries’ plagued the Sals at the quarterback position making them run a wildcat offense with no real threat to throw the ball. Campbell now gives Sallies a good quarter back option with the threat of being able to run and throw the ball down field. They have  a few weapons on the offensive side of the ball with Lukas Ryan, Deuce Rzucidlo, Micah Wing and Cooper Brown.

The Cape Henlopen Vikings will head west to Greenwood on Friday night at 7:00pm to take on the Woodbridge Blue Raiders ranked #5 in Class AA. The Vikings came up just short last week falling to Salesianum (#5 AAA) 28-20. Head coach J.D. Maull will look to even up the Vikings record with the run game of Jordan Baines behind their big offensive line. The Blue Raiders will play their first game under the Marvin Dooley era. Dooley has coached at Christiana, Wm Penn and St. Elizabeth prior to coming to Woodbridge

Caesar Rodney travels to Middletown to face St Georges after they suffered a 20-7 loss to Hodgson. The riders were plagued by turnovers in their lose losing the ball 6 times. They lone touchdown came from from senior running back Brock Conner. They were led on defense by Nate Waite & Clay Friend. For St Georges this will be their season opener coming of a great season last but ran into a talented Middletown team in the semis. The Hawks will have a new quarterback this year with Nyaire Wilson graduating as Donovan brooks takes over. They do return Gi’Vonni Sanchez who is a dangerous all around player at the running back position.

Game of the Week

St Marks comes into this game after running all over A.I. duPont as they rushed for 6 touchdowns. They were led by Donovan Artis who rushed for 3 touchdowns while Luke Najera added 2 for the Spartans. They also have a returning starters in Jabri White wide receiver/running back and Luke Watson on the line. Red Lion will be playing its first game of the year. They will open this season with some new players at key position after graduating some key players from last years playoff team. They will be led by Mac Krauss at quarterback who is familiar with this team playing some quarterback last season and being the starter all off season. At running back Deajon Jones returns after a good sophomore season but now will be the feature back for Red Lion. Kyle Manley is a two way player that will be at wide receiver & defensive back and the defense will be anchored by DJ Conquest at linebacker.