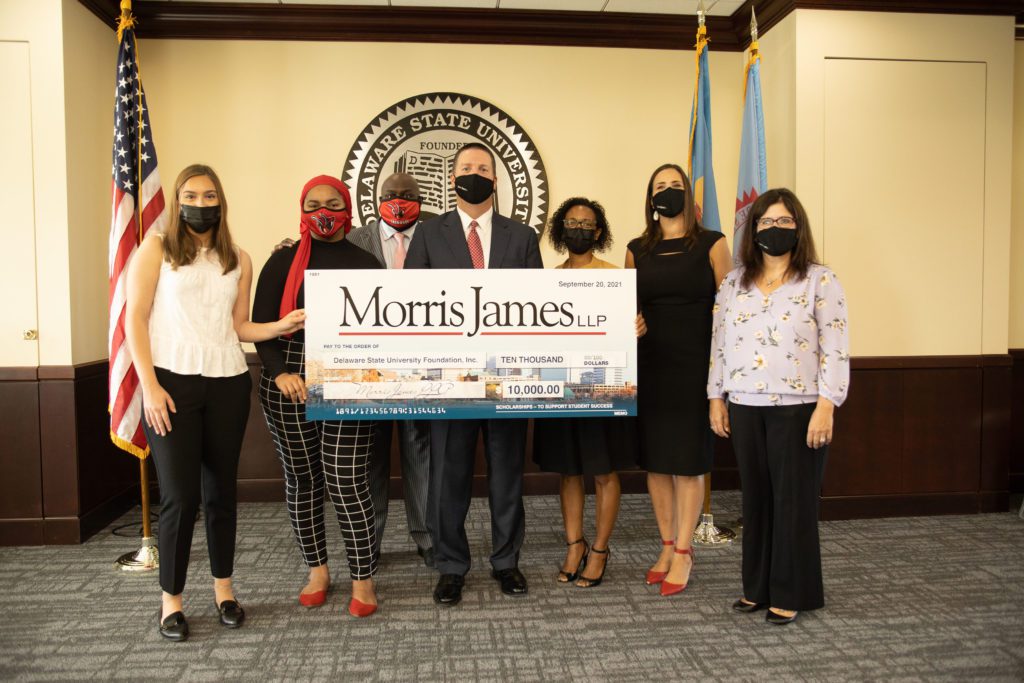 A $10,000 donation from Morris James will enable students to study more rather than working to raise money for the LSAT, tutoring.

The donation may not have a lot of zeros after it, but it’s targeted at helping the state’s only Historically Black College and University solve a specific problem: Helping minority students who often don’t have a lot of financial assets pay for courses and test they need to succeed in law.

“This is huge for our students,” said Kimeu Boynton, law studies director in DSU’s Department of Sociology and Criminal Justice. “Fees and prep courses can easily cost them as much as $500, which is a steep ask for young people from low-resource families, many of whom are already working one or two jobs to stay in college.”

Senior Political Science major and Law Studies minor Emily Campanelli noted that she often hears law studies students worrying about how to pay for the LSAT.

“For way too many students the cost can be a huge barrier to continuing on to law school, sometimes serious enough to make them give up their dreams,” Campanelli said in a press release. “This is a huge win for all of us.”

The donation marks the state of a relationship with Morris James that DSU hopes will develop to provide more opportunities for mentoring and internships for its law studies students.

The Law School Admission Test is a standardized test for prospective law school candidates. It is designed to assess reading comprehension as well as logical and verbal reasoning proficiency.

The test costs $200 per student and prep courses can cost hundreds or even thousands more.

Boynton said in a press release that this donation will provide law school applicants “critical breathing space” that can be devoted to studying rather than trying to acquire money for their LSAT exams and prep courses.

Morris James’ donation to the HBCU is aimed at addressing the lack of diversity in the legal field.

According to DSU spokesman Steve Newton, only 39% of students who take the LSAT are students of color and they currently constitute only 11% of all law school admissions.

Newton said on Wednesday that the LSAT exam is “a huge challenge for our students both academically and financially.”

“Forty-four percent of our students are Pell Grant eligible, which means that they’re federally recognized as coming from low-income homes where the average income is probably $45,000 per year or below,” Newton said. “For a lot of our students, it’s not only the huge issue of academically preparing for the test but also the specter of coming up with the money to take the test.”

Newton noted that many students opt to take the test multiple times in order to secure better scores for their law school applications, causing an additional financial strain on students with limited resources.

Four years ago, after DSU began paying for education majors’ Praxis exams, which are required to become a certified teacher, Newton said they began seeing an immediate uptick in student success.

He credited that trend to students being able to study rather than raise money — something he hopes to see come out of this donation, too.

Morris James said in the press release it was looking for ways to celebrate its 90th anniversary by giving back to the community. DSU’s law studies program was a perfect fit, they said.

“There is a critical need for more diversity in law schools and greater representation of attorneys from historically underrepresented backgrounds in practice,” said Dawn Sheiker, director of client relations at Morris James. “We’ve been committed to expanding those numbers for a long time.”

The Law Studies program at DSU began as an undergraduate minor with approximately 70 students enrolled.

The program recently became an independent major with the acquisition of Wesley College.

Students in the program participate in a variety of courses and early field experiences to prepare to apply to law school.

“This kind of outreach is exactly what Delaware has come to expect from Morris James,” said Tony Allen, DSU’s president.

He said the law firm has been a major player in supporting increased access for all to the legal profession.

“We’re deeply appreciative that they have recognized and chosen to support our own efforts in this regard,” Allen said.