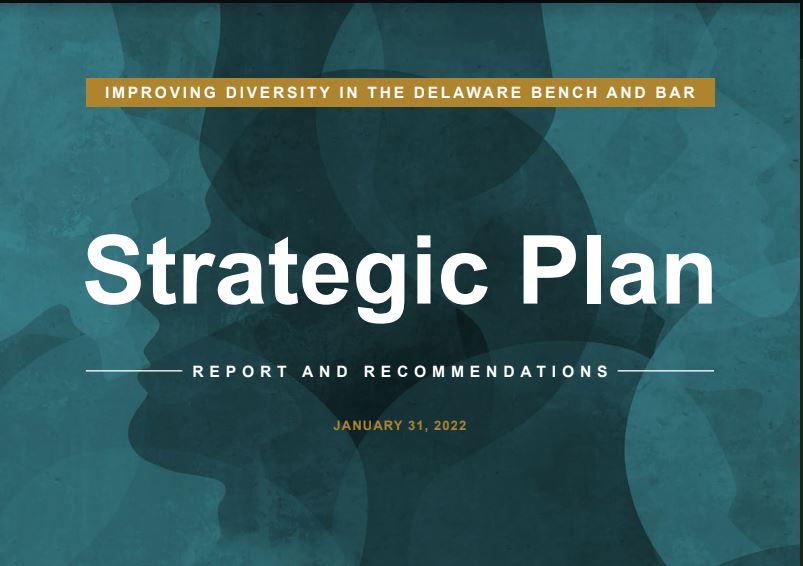 The Delaware Supreme Court will begin considering the 50 suggestions in a new report on increasing diversity on state courts.

The Delaware courts’ new report on improving diversity includes 50 action points that stretch from pre-college years through promoting diversity recruitment for judicial positions in a variety of ways.

It never alludes to the Delaware Way or a good old boy network. Instead, it says the lack of diversity can be linked to several interrelated issues, starting with how the law and the legal profession is taught in schools to bar readiness, professional retention, and the judicial nominating process.

Among its solutions are creating school pipelines for future attorneys, changes to the bar exam, and suggestions for the bench and the bar to add mentors and make sure minority candidates know how to be considered for judicial appointments.

It even throws support behind the idea of a new law school at Delaware State University.

Montgomery-Reeves said the plan is believed to be the first of its kind in the nation for a court system that offers “concrete steps to consider to make the Delaware bench and bar more representative of the diversity of our great State.”

The National Center for State Courts and the AccessLex Institute participated in the report’s creation. A steering committee included representatives from each of Delaware’s state courts, Delaware legal aid groups, the Board of Bar Examiners, the Department of Justice, the Office of Defense Services, the Governor’s Office, private law firms, Widener University Delaware Law School, the University of Delaware, Delaware State University and community and technical colleges. Dozens more were involved in subcommittee working groups or participated in interviews for the study.

Seitz said the full Supreme Court will consider the report and develop an action plan to work on the recommendations.

“Some of the recommendations are already taking place,” Seitz said in a press release detailing the report. Others will require new programs or additional studies to better craft solutions, the press release said.

Chris Coffey, the campaign manager for Citizens for a Pro-Business Delaware, said, “This report reiterates what we’ve emphasized for years with national leaders and Delawareans: Delaware’s overwhelmingly white legal talent pipeline, elite law firms and courts exclude people of color and it’s time to create real, tangible solutions to fix it. Now there are no more excuses.”

The business group was founded after a Chancery court decision forced the Shawe family to sell its language translation company, Transperfect, which was sold back to owner Phil Shawe. Since then, members of the Shawe family and the Citizens for a Pro-Business Delaware have worked against Gov. John Carney and been critical of Delaware courts, including their lack of diversity.

The organization, which says it has 5,000 members, has spent millions of dollars lobbying for changes, including more diversity on the courts, and protesting the millions in fees charged by Custodian Robert Pincus’ and Skadden Arps during the Transperfect court battle.

Coffey said it was time for the state to take action, from the governor to the legislature to courts that hire overwhelmingly white firms.

“Instead of more hand-wringing and reports, we need the courage and immediate action from Delaware’s leaders so that the ‘First State’ is not the last state when it comes to diversity and inclusion in its courts and legal industry,” Coffey said.

The judiciary already has requested funds in this year’s state budget for a diversity, equity and inclusion coordinator to spearhead efforts to carry out the strategic plan. If approved, the press release said, it’s possible diversity coordinator positions will be created for the other state courts in the coming years.

The committee issues recommendations following a theory that improving one area will lead to improvement in the next.

If students of diverse backgrounds are exposed to law-related education and have positive experiences with the legal system in elementary and high school — such as the high school mock trial program or improved civics instruction — they might consider a career in law.

At college and law school, programs will be put in place that support diverse students’ success.

“Diversity, equity and inclusion are not simple words to espouse when they impact social constructs like race, class, and gender,” said Delaware State University President Tony Allen in the press release. “They engulf every aspect of our public life. Nowhere is that more important than in our legal system. In that vein, I am very impressed with the Delaware Supreme Court’s focus on creating a more representative legal community that can serve as a national model across the country.”

Among the reports’ suggestions are:

• Consider the feasibility of a loan repayment program for attorneys who gain bar admission through the Delaware Scholars Program and practice law in the state for a specified length of time.

• Support initiatives of other institutions/agencies that have a direct impact on the diversity of the bench and bar in Delaware, such as a new law school at Delaware State University, a Historically Black College and University.

• Ensure outreach to law firms, especially smaller law firms, which are more prevalent downstate, and diverse bar associations on the importance of a diverse bench, judicial opportunities, and the judicial appointment process.

• Consider (through a survey or other means) whether the use of remote participation platforms would encourage more racially and ethnically diverse candidates to seek judicial
clerkships and employment in Sussex County, which may create a pipeline for more diverse clerks to work in and seek judicial appointments in Sussex County in the future.

“The strategic plan is a practical and progressive model in pursuit of addressing the diversity challenges in the Delaware legal community,” said Dr. Christopher Alan Bullock, pastor of Canaan Baptist Church, who worked on the pre-college subcommittee. “It’s long overdue but right on time.”