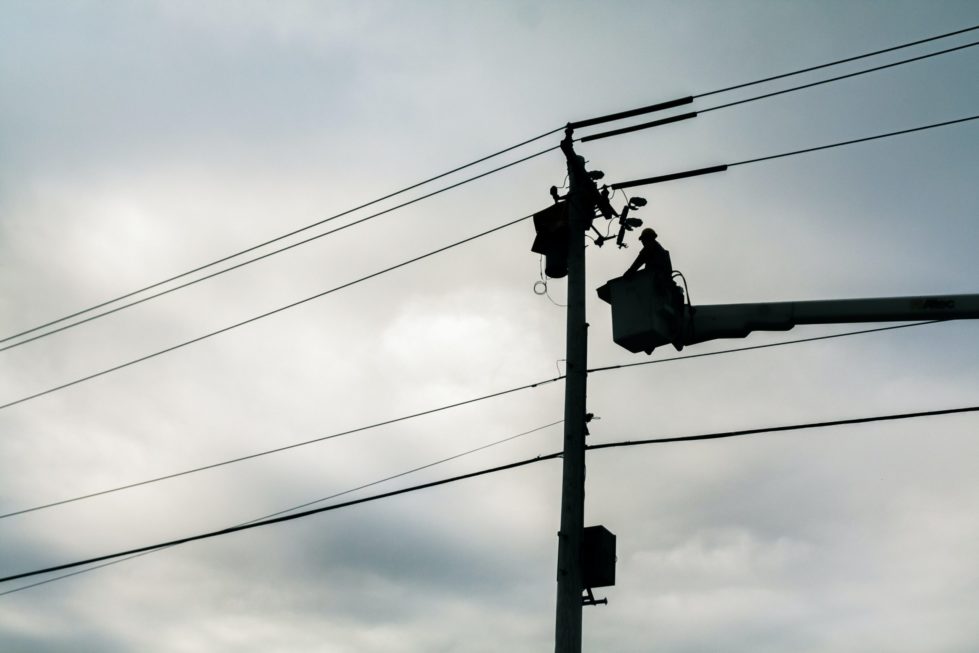 Delaware utility workers say they rarely work for the federal government and should not be included in vaccine mandate. Photo by American Public Power Association/Unsplash

Local utility workers are talking to their unions and elected officials about how to change their designation as federal contractors who must be vaccinated against COVID-19 by Jan. 4, 2022.

The workers say they aren’t necessarily opposed to vaccinations, but they are opposed to being designated as federal contractors when most rarely work on federal projects.

“Our fight is not with Delmarva Power or the Exelon Corp.,” said lineman Jamin Smith. “Our fight is with the federal government.”

Delmarva Power is a subsidiary of Pepco Holdings, which is owned by Exelon.

The issue arose after President Joe Biden on Sept. 9 signed an executive order that requires any company that holds federal contracts or performs work on any federal property to mandate vaccines for their employees.

Under the mandate, there is no option for weekly COVID-19 testing and medical and religious exemptions are limited.

Separately, the federal Occupational Safety and Health Administration has implemented a policy — also set to take effect on Jan. 4 — requiring all companies with 100 employees or more to require vaccinations or weekly COVID testing. Exelon and its subsidiaries, such as Delmarva Power, will be required to abide by that mandate too.

That policy is expected to cover 84 million workers, roughly 31 million of whom are unvaccinated.

Nearly 100 members of International Brotherhood of Electrical Workers Local 1238 gathered Tuesday evening in Newport to discuss the effects the mandates would have on their employment.

Efforts were unsuccessful Wednesday to obtain a comment from the IBEW national organization.

Attendees at the Tuesday night meeting were seemingly universally opposed to the federal contractor mandate. Many conveyed feelings that the government is attempting to twist the arms of regular Americans who want to make informed decisions about whether or not to get vaccinated.

Some expressed confusion that they would even be considered federal contractors, arguing that such a distinction had never been made before and that very little of their work involves the federal government.

In an email to employees submitted anonymously to Delaware LIVE News/Town Square LIVE, Exelon — the parent company to Delmarva Power, which employs most of the members of IBEW Local 1238 — said it expects the mandate to cover most of its employees and contractors, though it is still reviewing the policy’s implications.

Exelon and its subsidiaries supply electricity and gas to federal properties.

“Exelon has many contracts with federal agencies, and we’ve already heard from several of them seeking to modify their contracts so only companies that comply with the vaccination requirement can do work for them,” Exelon’s email to employees says. “We are still awaiting more information and working through the details of the orders. We’ll update you on how the vaccine mandate will affect Exelon employees in the very near future.”

Ben Armstrong, director of operations communications for Pepco Holdings, which includes Delmarva Power, said, “We continue to work through how we will comply with both the federal contractor vaccination mandate and the OSHA Emergency Temporary Standard.”

Smith said he isn’t opposed to the COVID-19 vaccination generally, but rather that the federal government would impose a mandate that takes away his right to choose.

He noted that employees are already required to wear masks when they are inside of buildings, in vehicles with other people and when interacting with members of the public.

Lineman Colin Lamb said electrical workers have been on the job more than ever since the beginning of the pandemic.

“We’ve been going non-stop keeping the lights on for the past 18 months,” Lamb said. “We’ve worked through it and we’ve done very well together as a unit and it’s just kind of a slap in the face now — after 18 months of doing our jobs and never complaining or giving any kickback — that now all of a sudden we’re lumped in with federal contractors. It came out of the blue and it’s never been talked about before.”

Smith said all he wants from Exelon is for the company to have its employees’ backs and let them make their own medical decisions. He suggested that the company offer support to employees who want to get vaccinated and offer a testing option to those who don’t.

Asked if it comes down to being vaccinated or risking termination, lineman Caleb Thompson responded with a question of his own.

“Is the government going to force the firing of half of the country’s linemen? We’re already understaffed across the board,” he said. “Not only that, but they can’t just fire them because to become a lineman takes a minimum of five years to go through an apprenticeship to get trained to do anything — so it’s not like you can just go off the street and hire Joe Schmo to come do the job.”

Thompson believes that most Americans agree that the vaccine is a good thing.

The problem, he said, lies with the executive branch forcing medical decisions on Americans and compelling them to share personal medical information with their employers and the government.

“They crossed the line,” Thompson said. “Our only recourse is to push them back over the line and possibly cross it ourselves in unity. We need to say enough is enough — we’re not going to stand for this. Our God-given human rights supersede any government mandate.”

Smith, Thompson and Lamb agreed that a mass-firing of electrical workers would be disastrous for the economy, noting that the effects would be felt by the public immediately.

“Nothing works without power,” Thompson said. “Everybody takes it for granted when they flip a switch but the reality is, everything relies on power. Putting gas in your car — the pump needs power to work. Hospitals are dependent on power. The entire world will shut down without power — it would induce chaos.”

He said that the effects of similar mandates for medical professions would be noticeable when you need doctors and nurses, but employee shortages in utility service fields will be felt immediately and everywhere.

Now, members of IBEW 1238 plan to meet with members of other unions as well as Delaware state legislators from both major political parties to express their discontent and discuss ways to delay the vaccination deadline.

Some members intend to ask state legislators to join the more than two dozen states suing the Biden Administration with the aim of halting the OSHA mandate.

The lawsuits ask courts to decide whether the administration’s vaccine requirements represent a federal power grab that usurps the authority of states to set health policy.

Most of the states engaged in lawsuits on the topic are Republican-controlled. It is highly unlikely that the deep-blue state of Delaware — Biden’s own home state — would choose to take the administration to task in federal court.

Union members from numerous professions, ranging from teachers to steelworkers, will meet with local elected officials and other stakeholders on Monday, Nov. 15 at 6 p.m. at the Nur Shrine Center, located at 198 S DuPont Highway in New Castle.

“We’re not asking for a lot,” Lamb said. “We’re just asking to retain a choice, right? That’s all.”

State hopes to inspire Delawareans to plant tree for every resident
Living donor awareness event Tuesday at Logan House
No deaths from COVID-19 reported in last week; where to be tested, vaccinated
A school centered around service: Wilmington Friends feeds the hungry