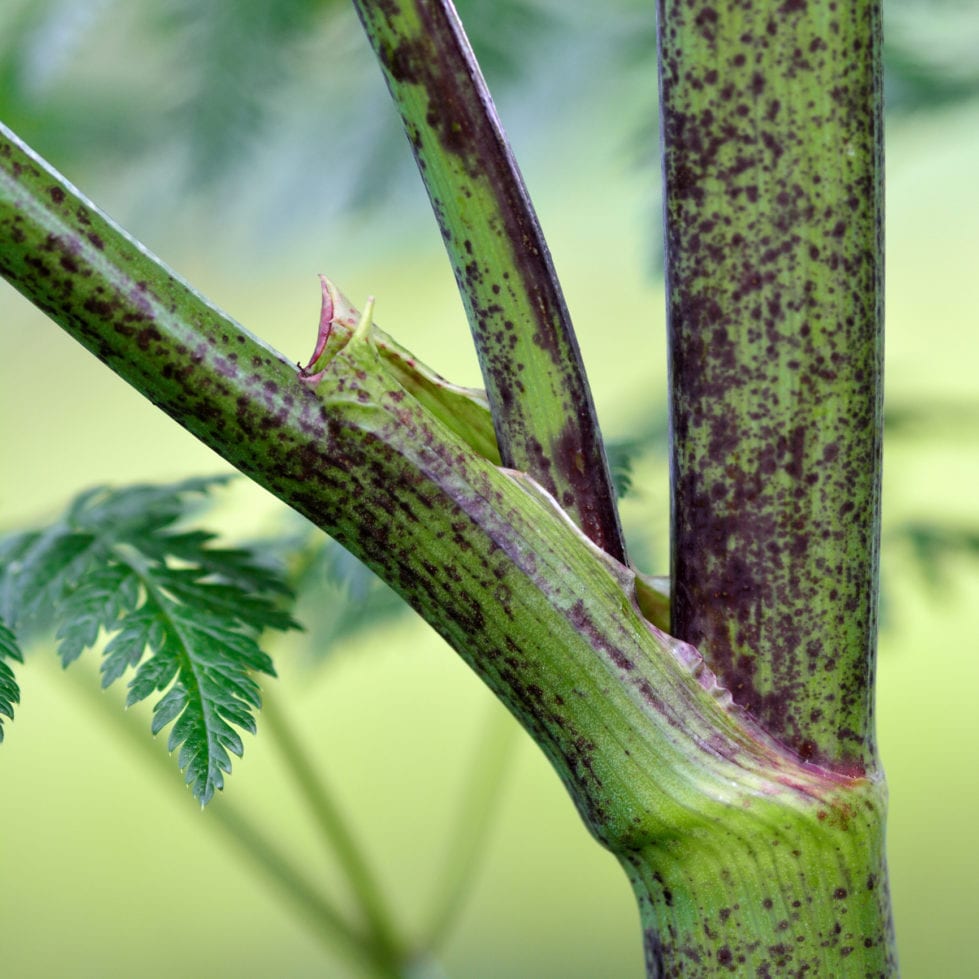 The stem of the poisonous hemlock plant, with purple spots

The Delaware Department of Agriculture has warned Sussex County residents that two species of poison hemlock have been discovered there.

The spotted water hemlock, cicuta maculate, and another form of hemlock, conicum maculatum, were found in area wetlands.

“Both hemlocks bloom from June through late August,” the Delaware Department of Agriculture said in a press release. “As members of the wild carrot family, both plants have small white flowers in umbrella-like groupings.”

The plant can be mistaken for wild carrot, which is commonly called Queen Anne’s lace, or wild parsnip or celery, the press release said.

“People who like to forage for natural foods or cut wildflowers are advised to avoid wild carrot-looking plants to prevent the possibility of being poisoned,” it said.

An invasive biennial, hemlock grows from 6 to 8 feet tall. The plants not only grow in wetlands but may be found in ditches, meadows, pastures and along cultivated fields

The stems are smooth with purple blotches. Leaves are alternately dark glossy green, appear fern-like and are triangular, lacey with veins running through the tips of the leaf serrations.

The plant emits an odor, but people should not crush any part of the plant as toxic alkaline cells can be released, poisoning the person.

Hemlock is native to Europe, northern Africa and wester Asia, introduced into the United States as an ornamental plant in the 1800s.

Spotted water hemlock grows up to 6 feet tall and the stems vary between solid green or purple to green with purple stripes or spots. The leaves are fern-like and lacey with veins ending at the base of the. Notch of the leaf edge.

The Department of Agriculture stated that anyone who believes they have found hemlock or spotted water hemlock should take a photo of the plant and send it to  DDA.marketing@delaware.gov for identification.

Residents who find some should not try to eradicate the plants themselves. A licensed aquatic pest control company needs to be contacted to treat both hemlock and spotted water hemlock.

The stems of the spotted water hemlock can vary in color. The dusty color on the stem can rub off and cause illness.

Wild Poison Hemlock plant with spotted stalk is a poisonous and toxic weed.

Always wear long sleeves, long pants and gloves when working with plants that are unknown, the state warned.

Sap from the plants can cause skin irritation or rash while others may experience serious illness. Mowing can also release toxic particles which may be inhaled.

Depending on exposure, whether the hemlock is inhaled, directly contacted or ingested, signs and symptoms of poisoning in humans can occur within 15 minutes or may not appear for several hours.

The plant is also poisonous to animals. which is why eradicating the plant in meadows or fields where livestock graze is critical.

Ingestion of hemlock or spotted water hemlock by livestock can lead to death in just two to three hours. Most livestock do not find the leaves palatable, so they may not ingest them if other feed is available.

Symptoms that livestock have ingested hemlock or spotted water hemlock usually occur within 30 to 60 minutes and there is no antidote. The toxins affect the nerve impulse transmission to the muscles and the animals die of respiratory failure, usually before the cause is determined.

If you suspect you may have ingested, come in contact with or inhaled hemlock or spotted water hemlock, contact the Poison Control Center at 1-800-222-1222 or call 911.