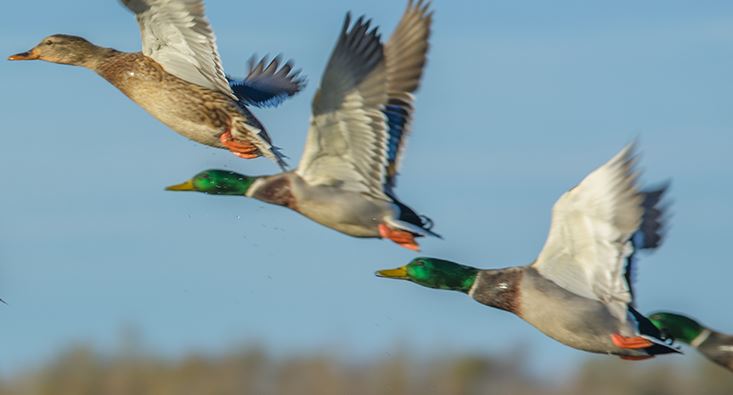 The USDA says the bird flu has been found in eight ducks, one good and a hawk.

A highly infectious bird flu that can rapidly kill domestic poultry including chicken, turkeys and ducks, has been found in eight wild ducks, a Canada good and a hawk.

The discovery has triggered a warning to hunters, poultry owners and poultry producers to take precautions in handling the birds.

The Eurasian H5 Highly Pathogenic Avian Influenza can be transmitted to humans, but no human infections have been found in the United States.

The U.S. Centers for Disease Control and Prevention considers the risk to the general public from HPAI H5 infections to be low.

The discovery of the virus was not unexpected because the Mid-Atlantic is part of a giant flyway through which birds migrate south in fall and winter and then back north again in spring.

Wild birds can be infected, but now show signs. However, the E5 virus can make domesticated birds very sick, spread quickly and cause death.

Avian influenza is not linked to the COVID-19 virus (SARS-CoV-2).

The U.S. Department of Agriculture’s Animal and Plant Health Inspection Service confirmed the Eurasian H5 strain in eight wild ducks and a Canada goose in Kent County, as well as one red-shouldered hawk in New Castle County.

All the ducks found to have the avian influenza – including five northern shovelers, one American wigeon, one black duck and a gadwall – were harvested by hunters and submitted to APHIS for sampling.

The Canada goose was dead when submitted for testing, while the red-shouldered hawk was tested after it had been taken to Tri-State Bird Rescue for rehabilitation.

The USDA, DNREC and others will implement additional avian influenza surveillance and testing.

Eight other states in the Atlantic Flyway have found avian influenza this year in wild birds, and it’s believed to be widespread in migratory waterfowl. Wild free-flying ducks, geese and shorebirds can carry the disease to new areas when migrating, as can raptors such as hawks and owls.

Avian influenza, commonly known as “bird flu,” is a respiratory disease of birds caused by an influenza Type A virus. These viruses can infect poultry (chickens, ducks, quail, pheasants, guinea fowl and turkeys) and some wild bird species (such as ducks, geese, swans, shorebirds, hawks and owls).

However, it impacts poultry and wild birds in different ways, a DNREC press release said.

DNREC also warned the general public that the proper handling and cooking of poultry and eggs to an internal temperature of 165°F will kill bacteria and viruses, including the bird flu.

Among the recommendations DNREC offered were precautions for waterfowl hunters and those who own birds or bird feeders.

A snow goose conservation order is in effect through April 8. Delaware waterfowl hunters were told they can  reduce the risk of exposing poultry or pet birds to AI by taking basic safety precautions to keep the disease from spreading.

No one should harvest or handle wild birds that are obviously sick or found dead, the state said.