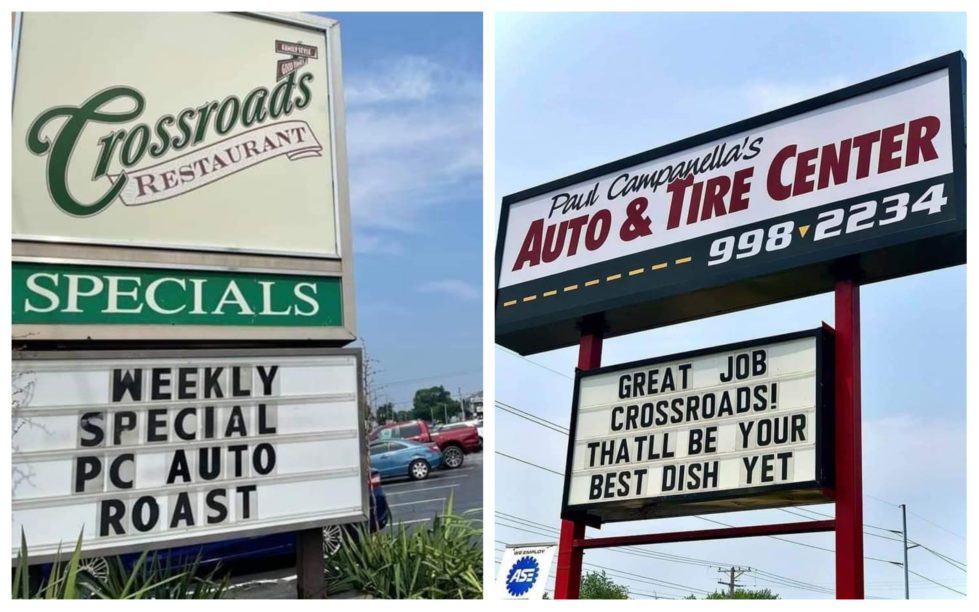 Campanella’s Pike Creek Automotive and Crossroads Restaurant near the intersection of Kirkwood Highway and Limestone Road have captivated the state on social media in their friendly quest to outwit each other’s marquees.

A two-week-long war of words between the two shows no indication of slowing down, and they seem to be trying to drag others into the battle.

It all began when Pike Creek Automotive, who has been posting witty signs for years, spontaneously decided to challenge their neighbor: “Hey Crossroads, wanna have a sign war?”

Paul Campanella, owner of Pike Creek Automotive, said he never talked with Crossroads management but was happy they decided to join in.

It’s all with the goal of making people smile, according to Campanella.

“We want to have something up there that makes you slam on the brakes and turn around to take a picture,” Campanella said.

Since then, the battle has intensified with exchanges such as:

Crossroads: “At least getting souped up here won’t fork your wallet.”

PC Auto:  “And when we soup up your car it doesn’t fork up your stomach.”

The question now is: how does the war end?

Matt Tyrawski, co-owner of Crossroads Restaurant, says his business has no plans of waving the white flag.

“We’ll keep going until they quit,” Tyrawski said. “We want to win the war.”

Campanella says his business has already won every single battle.

“They’re trying to compete with us but at some point in time, we’re going to have to start looking for somebody else to challenge us,” he said.

Both companies turn to their employees to come up with the best rebuttals.

Pike Creek Automotive even has a dedicated whiteboard where staff members write their ideas. Employees with the winning ideas are rewarded with bonuses, Campanella said.

Neither business reported an increase in sales, although their social media interactions have skyrocketed.

Crossroads Restaurant on Monday invited the WSFS branch across the street to join in, saying, “Hey WSFS, wanna join or is there zero percent interest?”

WSFS has not yet responded.