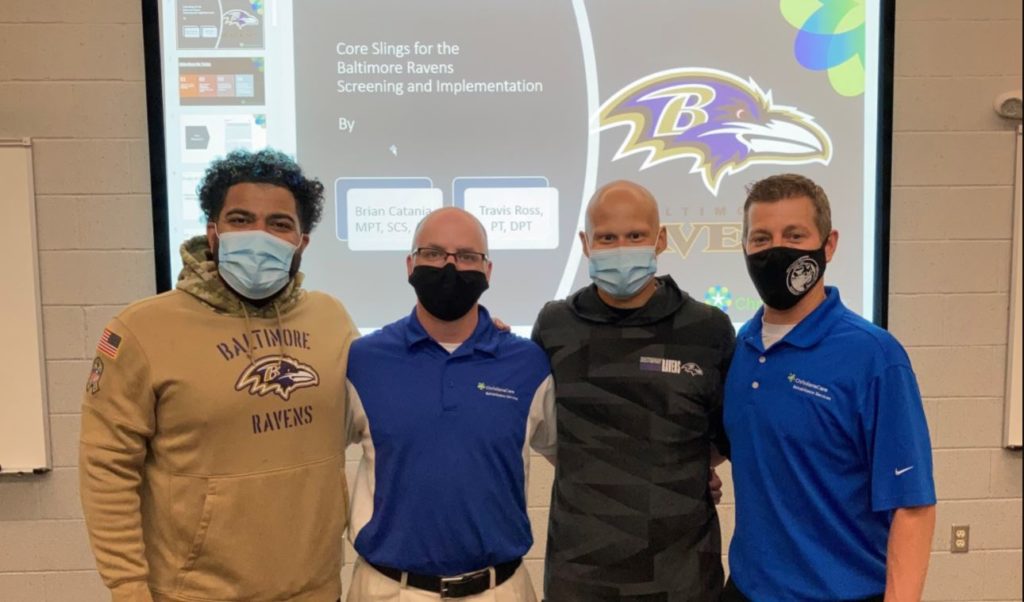 ChristianaCare physical therapists Brian Catania, second from left, and Travis Ross, far right, have trained the Baltimore Ravens staff in how to use their new program.

The routine developed by Brian Catania and Travis Ross was published in the Journal of Sports Rehabilitation in March, after seven years of work.

The project has its roots at the University of Delaware where it was used first by UD’s lacrosse team and expanded to others. The  sample for the study cited in the journal article was 31 female and male Blue Hen students.

Before the 2021-2022 NFL season began, Catania and Ross trained both the Baltimore Ravens and Los Angeles Rams on how to implement their system.

The UD Lacrosse team had been having a lot of hamstrings, groin, low back, hip-flexor injuries, Catania said. Their own practice was working with an elite runner battling chronic hamstring strains, too, he said.

“We had been investigating why these keep happening and what the literature is saying,” Catania said.

The newest information led the two to the idea that without activating the core muscles in the body, bigger muscles won’t be able to do their job, particularly in the body’s lower extremities.

The real problem had been the idea that rotational exercises that involve twisting the body and working muscles on the sides of the abdomen, chest and pelvis were bad on one’s back.

They realized that the stretching and strengthening should use the rib cage and not rotate or torque the low back.

As a solution, Catania and Ros developed a tool to test a patient’s core strength, now named the “core sling screen,” and then implement seven rotary-based core exercises that aren’t hard on the lower back.

The core slings are a group of muscles that start at the trunk and connect to the lower body. They are involved in controlling rotation or counter rotation of the body. Their SAS System tests six of those slings to look for imbalances and weaknesses that could lead to injury.

“We saw a dramatic reduction in overall injuries, overall time missed from injuries and the amount of playing time they were able to increase was substantial.”

Outside of athletics Catania said that while the range of motion in the exercise may have to be altered for those who are not athletes, the basic principles have the capacity to help anyone.

Catania and Ross said people who aren’t athletes should be prescribed these exercises by a physical therapist, who can help train them in the proper way to do the work.

They also said that people who are trained properly and sure they could safely do the exercises may benefit from doing them as a preventative measure.

“If I had been doing this early on in my career, I would have won more titles,” said Steve “Sven” Peterson of New Castle. Now retired, he won five world and two national championships in ultimate frisbee.

“I would have been less uncomfortable, and the play would be better,” he said.

Peterson has watched Catania and Ross develop the system as his ultimate frisbee play took a toll on his body. When he began using the system, his performance in game got better and his injuries got less frequent, he said.

Catania and Ross have traveled across the country speaking about their research and teaching other physical therapists how to use and implement the screening tool and exercises.

“We’ve been presenting on this for years, but this doesn’t catch on until you have valid data to support what you’re doing,” Ross said. “I think the validity of what we did for the study has really reached everybody.”

Since the study was published, Catania and Ross have seen running groups and other University of Delaware sports teams integrate the training into their routine.

On Dec. 2, Catania will be meeting with the UD athletic team trainers to refresh them on the system.

The journal article caught the attention of the Professional Football Athletic Trainer Symposium, which takes place alongside the NFL Combine. Both were invited to the event to share their system with the league’s 32 athletic training teams.

Now the Baltimore Ravens and the Los Angeles Rams are using it.

“The research by ChristianaCare Rehabilitation Services regarding core slings is an extremely effect approach that is based off of sound reasoning and practical application,” said Jon Hernandez, physical therapist and assistant athletic trainer for the Rams.

“Whether it be our injury prevention programs, corrective exercises or rehabilitation practices, the sling activation series is applicable to a myriad of conditions we see in an NFL athletic training room.”

Efforts were unsuccessful to reach the Ravens for comment.

Catania and Ross are looking forward to seeing how the exercises affect the Rams and Ravens when the stats are compiled at the end of the season.

They hope that will lead to more teams using their programs and fewer injuries for athletes.