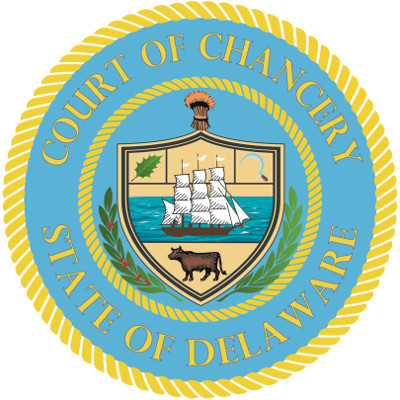 The seal of the Delaware Court of Chancery.

A Delaware Chancery Court judge on Thursday said she was going to deny a request to force ChristianaCare Health System to immediately treat a COVID-19 patient with  Ivermectin.

Mary Ellen DeMarco had asked the court for a preliminary injunction that would make ChristianaCare provide the drug, most commonly used in humans to treat parasitic infections, for her husband David as his situation worsened.

The hospital had refused, despite the couple obtaining a prescription for the drug from a downstate doctor.

The DeMarcos checked David out of ChristianaCare Sept. 18 under hospice care and gave him a dose of Ivermectin at home. However, his oxygen mask broke,  his situation worsened and he was sent back to Wilmington Hospital and intubated so a ventilator could be used to support his breathing and oxygen levels.

At the end of a two-hour hearing Thursday afternoon, Vice Chancellor Morgan T. Zurn said that the plaintiffs had failed to prove their case. While she said she would issue a formal opinion Friday morning, she wanted the DeMarcos’ lawyers to be able to prepare their appeal because time is of the essence.

Zurn said ChristianaCare did not have an enforceable duty to treat DeMarco with Ivermectin, and that DeMarco didn’t have an enforceable right to be treated with it. She also said DeMarco has failed to prove that the health system refusing to give David ivermectin would deprive him of an effective treatment or that he will be worse off without it.

A number of lawsuits have been filed around the country asking courts to force hospitals to treat patients with Ivermectin, a drug that’s also used to deworm horses. Some cases have been successful and some have not. Many opposed to COVID-19 vaccines consider it a treatment that can help.

David DeMarco became sick enough to go to an urgent care in early September, where he was diagnosed with pneumonia that likely was COVID pneumonia, his wife testified Thursday. The urgent care gave him Levaquin, an antibiotic, and suggested he go to a hospital. He declined, but by Sept. 8 he felt so bad that he asked his wife to take him to the hospital.

He was immediately taken into the emergency department and then put into ICU. Mary Ellen DeMarco said she told the hospital that she had her husband’s medical power of attorney and that he didn’t want to be on Remdesivir, an antiviral drug designed to stop a virus from spreading.

Mary Ellen said she had COVID-19 at the time and was not allowed into the ICU. Her husband’s condition began to steadily decline. At one point, he texted her and told her he wanted Ivermectin. She was told the hospital would not administer it because it wasn’t part of their protocols.

The couple was able to get a prescription for Ivermectin from Dr. Adam Brownstein, a private practice physician in Milton who recently left Bayhealth. Brownstein talked to David DeMarco and his doctors and prescribed the medication. The hospital would not give it to DeMarco, and the couple filed suit.

An emergency order to treat David DeMarco with Ivermectin was turned down Friday by Zurn, setting up the hearing Tuesday.

Dr. Ryan Partovi, a California neuropath doctor, testified Thursday that he had reviewed David DeMarco’s records by going into his patient portal and believed that Ivermectin would help him.

Partovi, who said he did not have any hospital privileges, said he had consulted on about a dozen ICU cases and treated somewhere around 250 patients with the drug.

“I use multiple different medications, but I would say that the one medication that I found is the most effective by itself has been Ivermectin,” he said. It works best when taken early in an infection, he said, but he had seen patient improve even when they were given it while in a coma.

He said he didn’t believe Ivermectin would cause any negative reactions when combined with medicines that DeMarco already was taking. He testified there was a 58% better chance of David DeMarco surviving if he was given Ivermectin because it would help reduce inflammation caused by COVID-19.

Under cross-examination, Partovi said he was board-certified in generative medicine, but not in other fields.

He said he reviewed David DeMarco’s hospital records Thursday morning, after he was asked Wednesday by Mary Ellen DeMarco and her lawyers to testify.

“This medication Ivermectin is one of the safest medications in the armamentarium,” Partovi testified. “There’s been over 4 billion doses administered globally, with only 3,000 adverse events.”

Dr. Vinay Maheshwari, head of ChristianaCare’s Department of Medicine, said the hospital’s protocols are based on recommendations from various national medical groups, including the American Medical Association. Those groups’ suggestions usually are based on several high quality studies published in peer-reviewed journals, he said.

Maheshwari, a pulmonologist who deals with the lungs and respiratory tract, oversees ChristianaCare’s pulmonologists, hospitalists and critical care teams. He said ChristianaCare’s 13-page patient care guide is routinely updated as information and suggestions change. It was most recently changed on Sept. 15.

As far as Ivermectin is concerned, he said, “There’s been no moderate to high quality studies that prove its efficacy in patients that are hospitalized or have severe critical illness.”

It had been known to cause liver damage, he said.

Maheshwari said he did not know of any well-regarded health care agencies or governing bodies that have recommended or approved Ivermectin for the treatment of COVID-19.

He examined David DeMarco himself Saturday because he knew the couple wanted to take him home against medical advice.

“Both advocated for the use of Ivermectin to the primary treatment team, and they were explained why we did not feel that that would be a beneficial treatment and in fact could pose some harm to him,: Maheswari said, “and why that was not the treatment that we would feel comfortable in prescribing.”

Maheshwari testified that he didn’t research Ivermectin, but was aware of American Medical Association and Cochrane Review Database studies that showed Ivermectin wasn’t effective. He testified he did not research what other countries or agencies might support it.

He testified he was aware the National Institute of Health had changed its recommendation about Ivermectin to say that it was neutral about its use and pointed out the NIH did not endorse its use.

Plaintiff lawyer Ralph Lorigo of New York said in his closing statements that the reason nobody was looking at Ivermectin was that its patent had expired and nobody could make money on it.The drug is safe enough that the CDC suggests all immigrants be given it when arriving in the country, he said.

“The hospital has nothing to lose by providing Ivermectin,” Lorigo said. “Irreparable harm occurs every day to this individual, and death is the end result if the protocol doesn’t work. It doesn’t work in a lot of situations. That’s why we have 650,000 dead people.”

Ron Gallagher, representing ChristianaCare, said the issue wasn’t whether there was sufficient evidence to use Ivermection.

“The primary issue is whether this Court has the authority to compel a physician to administer a drug or. any treatment for that matter, that in the physician’s medical judgment has not been proven to be safe and effective and is contrary to generally accepted healthcare standards to obtain a mandatory injunction,” Gallagher said.

He said Mary Ellen DeMarco could not prove that Ivermectin was her husband’s only chance of survival.

“The traditional consensual nature of the physician patient relationship will be undermined,” he said. “The autonomy of physicians to make medical judgments about what is and is not in the best interest of their patients will be undermined. And a healthcare institution that is already near the breaking point, dealing with the effects of this ongoing pandemic, is likely to be beseiged with demands for whatever miracle cure is currently burning up the internet.”

Chancery Court cases are appealed to the Delaware Supreme Court.