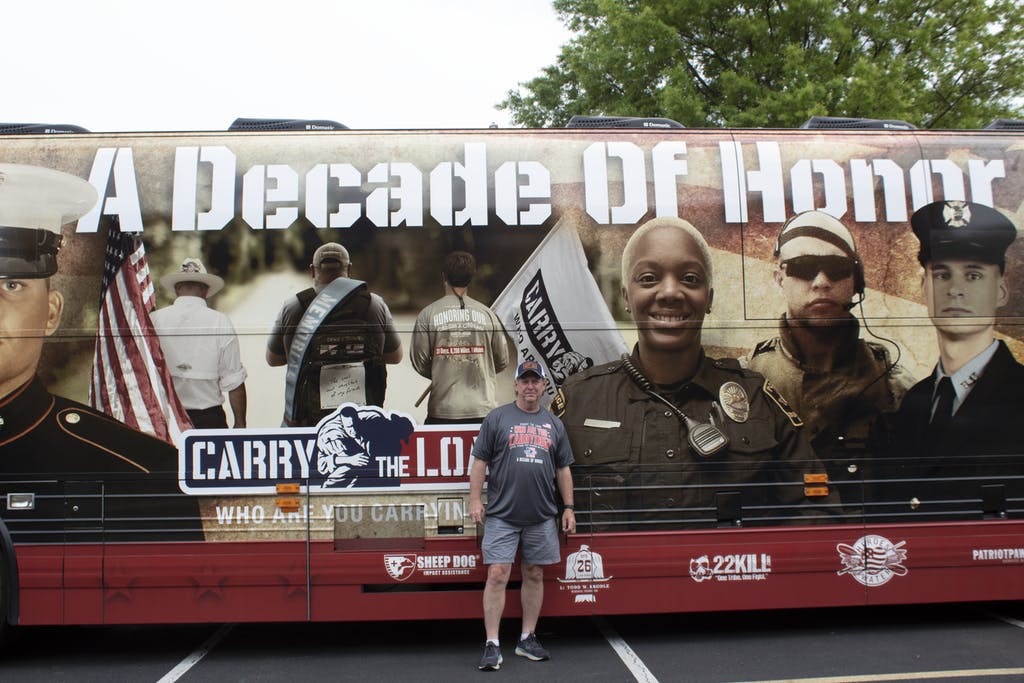 A national nonprofit devoted to restoring the original meaning of Memorial Day, which is honoring the fallen among troops, police and other first-responders, stopped in Delaware.

“What Carry the Load is trying to do is restore the meaning to Memorial Day,” said retired Dallas fire-rescue firefighter David Lindsey, who has been a part of the organization since 2014.  “The whole premise is to remember the people who sacrificed everything.”

“Carry the Load” members stopped several times Friday as the coast-to-coast relay came through The First State on its 10th anniversary.

Participants walk, bike or ride a bus for a specific of road so the program travels through all 50 states as well as the District of Columbia to walk, bike and bus in remembrance of fallen EMTS, fire fighters, police officers and military servicemembers.

Carry the Load was founded in 2011 by two veteran navy seals, Clint Bruce and Stephan Holley.

Four different routes have been established that wind through different areas of the country cover the East Coast, West Coast, Midwest and mountains.

Members hope to provide an active reminder of the heroes who had tragically lost their lives. The organization also raises funds for other related nonprofits to support  veterans, firefighters, police officers and EMTs suffering from mental and physical issues related to their work.

Last year’s event had to be canceled because of the COVID-19 pandemic and held online instead.

The East Coast relay is managed by Lindsey. Its route begins at West Point Cemetery in New York and ends on Memorial Day in Dallas, Texas. Delaware’s portion of the relay began in Wilmington and ended at the Hartly firehouse in Kent county at around 10 p.m. It ran about 44 miles, not including the two bus rides.

Lindsey said founder Clint Bruce had been talking to his family about what they should do for Memorial Day. Family members recommended things like barbequing or beach trips, but Bruce wasn’t satisfied.

The former Seal decided to put on his rucksack and go walking around a lake in Dallas as a release, and to honor the fallen soldiers in his own way. Bruce was stopped by another veteran, a World War II veteran, who wanted to ask him: Who are you carrying?

Lindsey said he is carrying a lieutenant from the Dallas fire department,. who was also a family member of his, who died in 2011.

Participants often walk a stretch of the relay with a name attached to the back of their shirt, symbolizing who it is that they’re carrying on their shoulders. It can be a beloved family member, a friend or a complete stranger who died while serving. 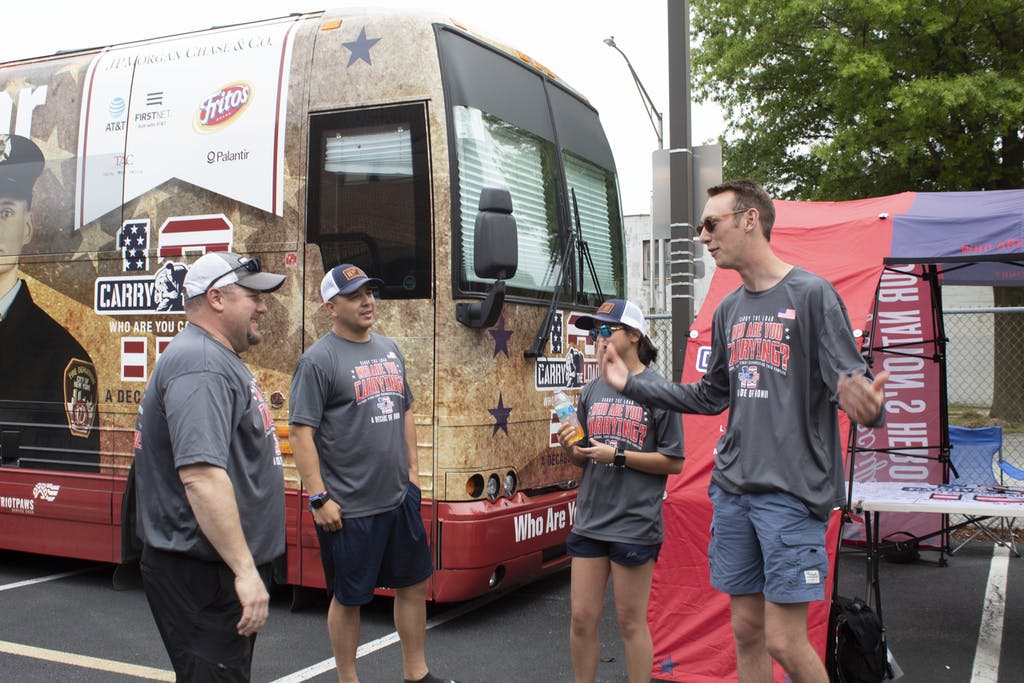 Andrew Deleon, right, is the only cyclist on the East Coast team; he is doing it in memory of his two brothers

Volunteers for Carry the Load travel by a custom bus for a little less than an entire month, stopping several times a day. The bus features 12 bunks, so the team only stops for a hotel when they really need the shower and can’t find an accommodating firehouse.

Most of the volunteers only stay for a week or so, taking a plane back home wherever they need to stop. Some stay for the entirety of the trip.

“The first thing I’m gonna do when I get back is sleep in my own bed. I miss my bed,” said Andrew Deleon, who is the only cyclist on the East Coast team and will be staying with the organization until Memorial Day.

Deleon is carrying two of his brothers who have passed in the last six months.

He has been a part of Carry the Load for several years and said that even though he has children at home, he looks forward to the experience every year. In these polarized times,  he said, having something that all people can come together on restores his faith in humanity.

“I have a walking leg today, not long, maybe about 7 miles,” Deleon said. “I did a biking leg yesterday that was about 17 miles.”