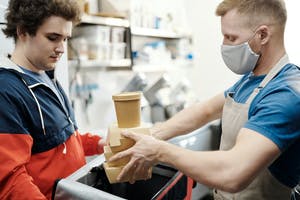 (Photo by Norma Mortenson from Pexels)

Gov. John Carney and state health officials have one big ask: Get the vaccine or wear the mask.

Prompted by updated CDC guidelines that allow those who have been vaccinated to no longer wear a mask, Carney on Tuesday stressed the importance of those unvaccinated to continue following those masking and social distancing procedures.

Approximately 50% of all Delawareans have been vaccinated. While Carney seemed glad that masks have started to be taken off, he was still deeply concerned about the other 50% who hasn’t been vaccinated, and the risk that poses to the spread of the virus.

“We’re not going to be in the business of asking people for so-called vaccine passports,” Carney said, “so we know who’s vaccinated and who’s not.”

The problem that the state faces in lifting mask mandates is in enforcement. Private businesses, of course, can set their own rules on masking, which costumers would have to follow. Carney said that as an employer, state buildings will require masks.

Carney mentioned toward the end of the weekly COVID-19 press briefing a partial reluctance get rid of mask requirements, which was reinforced by discussions with New Jersey Gov. Phil Murphy, who has so far decided not to lift masking restrictions.

“We were both in the same place initially,” Carney said. “Then the more I talked to my team about it and thought about it, the more I thought that it would be very very difficult if not impossible to enforce as well as inconsistence without pronouncements of following CDC guidelines from the beginning.”

Carney said that he and Murphy agreed that lifting masking requirement now is a close call considering vaccination rates aren’t where they want. Carney said that not having to wear a mask should work as an incentive for some people to get the vaccine, but he still worries about people who refuse to do either. Carney worried that there’s still potential for an outbreak among those who haven’t yet been vaccinated.

Dr. Karyl Rattay, who also spoke at the weekly press briefing, clarified that those who have not been fully vaccinated – either two shots of the Moderna or Pfizer vaccine or one shot of the Johnson & Johnson plus two weeks’ time – should also be masking and socially distancing at least three feet as one shot does not give enough protection.

Children who can’t vaccinated, those younger than 12, also need to adhere to masking and social distancing requirements. For this reason, schools will still require three feet of space, and masks will be required for at least the rest of the school year.

Delaware has seen a sharp decline in the spread of COVID-19 throughout the state in the last few weeks as vaccines rise.

The state is seeing 120 cases per day over a seven-day moving average and a 3.7% positive test rate. There are 77 coronavirus-related hospitalizations. Cases per day are down 29% from last week, according to Rattay, director of the Delaware Division of Public Health.