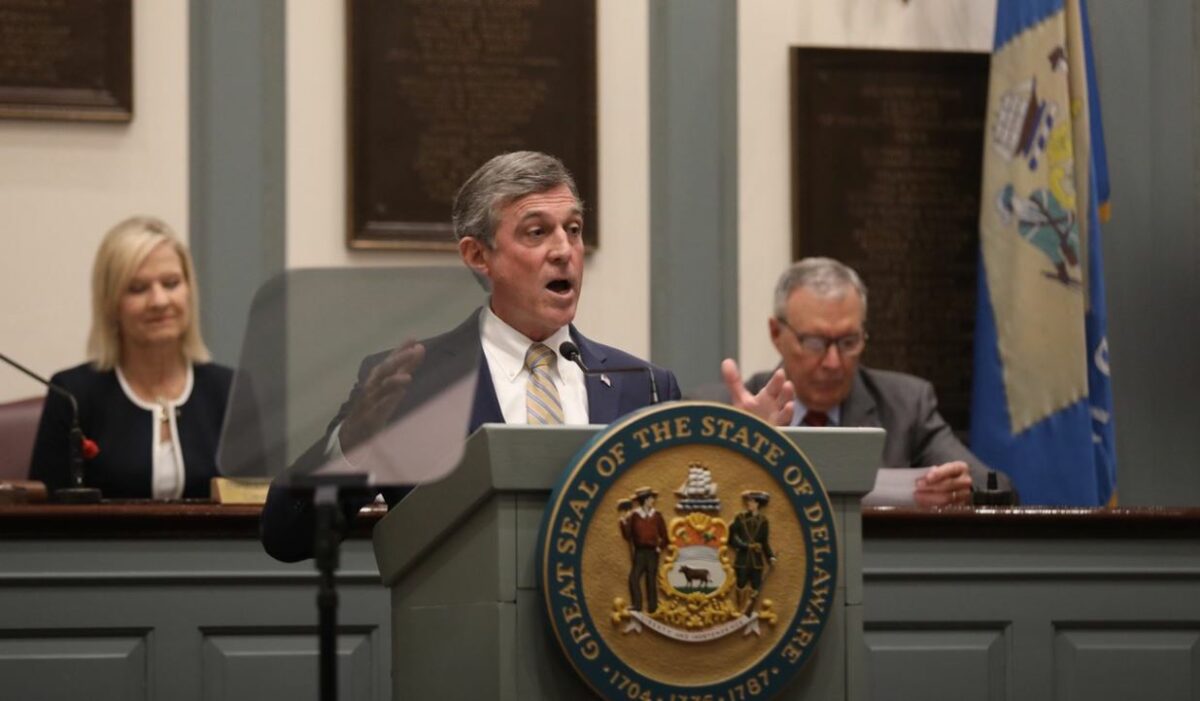 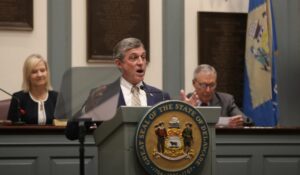 Gov. John Carney said during his annual State of the State address that Delaware is on solid financial footing to focus on issues it wants to improve.

Gov. John Carney’s annual State of the State address Thursday revolved around the need to bring good jobs to the state and make sure people were ready to take those jobs.

In front of a packed Senate chamber, Carney said the people of Delaware want politicians to work together to solve problems.

He pointed out that compared to six years ago when Delaware faced a deficit, the state today is in solid financial shape to help provide good jobs, quality education and safe communities.

“I’ve never been more confident about where we are headed as state,” Carney said.

Building a strong economy is Job 1,  he said.

Carney pointed to Seaford, which struggled after the famed Nylon factory closed there.

Last year the Royale Group said it would create a $2.35 million expansion in Seaford that’s expected to create 29 jobs.

In December, Seaford’s Nylon Capital Shopping Center was sold to 9th Street Development Co. It plans to invest $60 million to turn it into a multi-purpose community facility that includes healthcare services, an early learning center, co-working space and a job skills center.

Carney pointed to several business investments around the state as examples of the types of jobs and companies he hopes Delaware will continue to attract.

One of the oddities of recent years has been the flipflop between the number of jobs available and the number of applicants, he said.

“That is the opposite of how it has always been,” Carney said. “I’ve never seen a situation like this before.”

When the state has thousands of open jobs, it affects its ability to compete, he said. 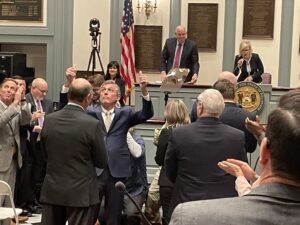 Gov. John Carney signals to families and friends in the balcony as he arrives in the Senate Chamber Thursday to deliver his State of the State Address. Photo by Rachel Swick Mavity.

He will focus more on that next week when he releases his Fiscal Year 2024 budget proposal, he said. FY 2024 begins July 1.

Carney already has said the budget will include a 9% raise for teachers, partly to keep current teachers in the state and attract teachers from other states.

“All Delaware children will benefit If we can attract the best teachers,” he said Thursday.

“The uncomfortable truth – too many students are behind. And that’s just not acceptable for any of us. We can all agree on this. All our children deserve a high-quality education,” Carney said.

The budget will propose more than $50 million for opportunity funding, which is designed to help low-income children and English learners.

Carney said he also plans to announce an $8 million investment in a childcare program that helps low wage earners pay for day care so they can go to jobs.

Sen. Brian Pettyjohn, R-Georgetown, said during the Republican rebuttal to Carney’s speech that he’s excited to hear education and teacher raises will be part of the focus this year, but he believes more needs to be done.

One example, he said, is to figure out how to accurately test students. Right now, all 11th grade students must take the SAT, he said, but not all plan to enter college.

There must be other ways to evaluate their knowledge and skills, he said.

Carney’s proposal now is to give all education workers a 3% raise and give teachers an additional 6% on top of that.

“We have a teacher shortage, and we have teachers going to other states. Now we can encourage teachers to come here and those who are here to stay,” Schwartzkopf said.

He considers the governor’s State of the State speech as a kind of report card.

“We got a pretty good report card today,” he said. “Much of this work was started years ago. While we were all at home during the pandemic, many were continuing the work to bring jobs here.”

She said she was happy to hear that the amount of money the state puts toward Purchase of Care — the program that helps low wage earners pay for childcare — will be increased.

“So many [daycare] providers and families have struggled,” she said.

Sen. Eric Buckson, R-Camden/Frederica, is in his first term in the Senate. He said he heard a lot of positivity in Carney’s remarks, but he is especially interested in learning more about the teacher shortage and what teachers need to be successful.

“Funding is part of it but it’s not the only part,” Buckson said. “The focus needs to turn to what teachers need and that has to come from the inside out.”

Buckson said he hopes to do an “all call to teachers” that will allow them to be open and honest with what they need to make their work environment better.

Rep. Lyndon Yearick, R-Camden/Wyoming, said students need to be ready to enter the workforce, especially with so many jobs open.

But there needs to be a plan, Pettyjohn said, and “right now there isn’t a plan.”

“We are in uncharted territory. We need to bring people around the table to figure out the best way to support teachers and improve education,” Pettyjohn said. “I am disappointed we did not see more of a plan to get learning back where we need to be.”

He and other Republicans want to see teachers have more autonomy in classrooms and they would like to see local school districts have more choice about how to spend the money they get.

House Minority Leader Rep. Mike Ramone, R-Pike Creek, was among the Republicans who pointed out that Carney started his speech by saying the people of Delaware want politicians to work together to solve problems.

“I think we need to hold the governor to that statement,” Ramone said. “It’s easy to say working together when you’re there and everybody’s looking, but when you really do have to work together … I think it’s intriguing.”