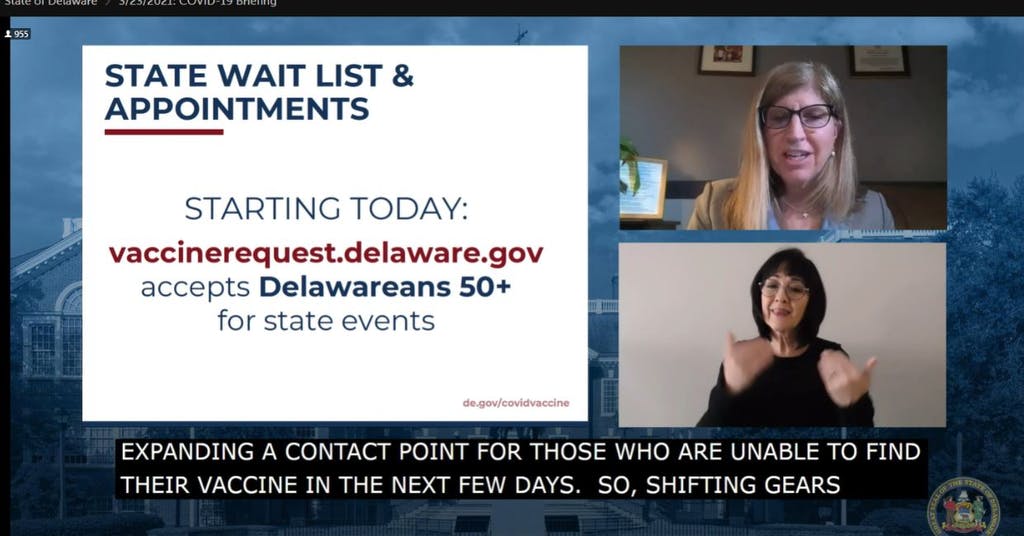 Dr. Karyl Rattay talks about opening vaccine registration For those over the age of 50

Delaware expects to see a huge increase in the amount of Johnson & Johnson vaccine in the next two weeks, state officials said Tuesday.

The state also is seeing a slight uptick in COVID-19 cases this week, and nearby states are seeing it, too, which Gov. John Carney said makes him leery of opening the economy more right now.

But he also said he might have an announcement about that this week or next.

“I’m a little hesitant right now given the numbers that we’ve seen over the last week,” Carney said about loosening restrictions. “We’re still working on it. There may be something this week. It depends on how these numbers trend.”

Carney mentioned that the case rates of surrounding states such as Maryland, New Jersey and Pennsylvania play into Delaware’s reopening plan.

Carney also  said he was following  advice given by federal COVID guru Dr. Anthony Fauci during a White House call with all 50 states.

“That is one of the things that Dr. Fauci said during the White house call this morning: Make sure you have improving conditions, you’re not plateauing out or going in the opposite direction. And whatever you do with restrictions, do it gradually,”  Carney said.

The state plans to reopen gradually over time opposed to conditioned phases that were in place at the start of the pandemic.

He attributed the small rise in Delaware cases and hospitalizations to the St. Patrick’s Day celebrations, which took place over two weekends of great weather.

Newark, Elsmere, Newcastle, Hockessin, Wilmington and Middletown are areas of concern because they have a higher rate of positive cases than the rest of the state, said Dr. Karyl Rattay, director of the Delaware Division of Public Health.

Delaware officials said that they have systems in place to deliver as much vaccine as the state can get from federal authorities.

They were all pleased to hear about the J&J vaccine because not only will they be getting more, but it requires only one shot for an individual to be fully vaccinated.

The state does not know how large of an increase it will be.

Health officials also announced that the state vaccine registry opened today for those 50 years or older, dramatically expanding the pool of people who can be vaccinated.

While those 50 and older can get a vaccine through pharmacy programs, Rattay said the most efficient way to get a vaccine is to be on the registry.

She also said that 26% of all Delawareans now have received at least one dose of vaccine, meaning one in four people have had a shot. Of those, 135,222 have been fully vaccinate and 121,419 have had one of two doses.

Rattay  recommended that those 16 and older with underlying health conditions as well as non-paid caretakers should seek a vaccine from their own medical providers. In the case that none of their medical providers are vaccinating patients, individuals in these groups can receive a referral to be vaccinated at a state site.

The CDC said that students in class are permitted to be seated 3 feet apart from each other so long as they’re facing forward, wearing masks and the room is properly ventilated. In hallways and lunchrooms, students should still be socially distanced at least 6 feet.

On buses, students should be 3 feet apart at minimum, facing forward and wearing masks. Because students need to have at least 3 feet of space between them on the bus, only 23 students are permitted to be in one bus, something that parents around the state have been asking about.

These CDC guidelines are what the state had already recommended last summer, Rattay said.