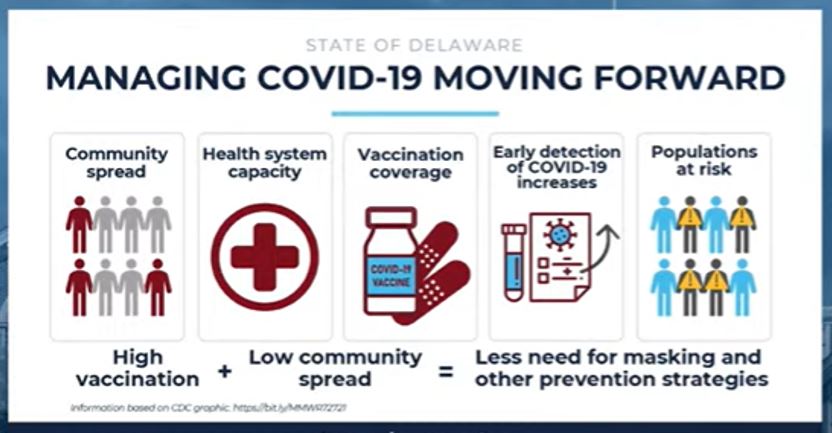 DHSS Secretary Molly Magarik said the state will now shift to living with the COVID-19 virus.

As the number of new Omicron cases continues to drop in Delaware, Gov. John Carney said Tuesday he will once again suspend his weekly COVID-19 press briefings.

The state will, however, continue to push for residents to take vaccines and booster shots, which help reduce the severity of COVID cases and prevent hospitalization.

“Our numbers are dropping, dropping like a rock in terms of the number of positive cases and percent of tests that are positive,” Carney said at the end of Tuesday afternoon’s briefing. “We’re not where we want to be. We’ve still got a little ways to go there. We’ve also got some work to do with our school superintendents and school staff and school boards over this month and next month until the end of March.”

The statistics Carney presented at the meeting showed Delaware is down to 305.6 new cases a day, on a seven-day average. That’s well below the 3,000 new cases a day a month ago, and one year ago it was 343. The percentage of posting tests has dropped to 8.8%, down from 30% and higher. Hospital rates have dropped from a high in the 700s to 190, with 11 people in critical conditions.

Carney dropped his universal indoor mask mandate for the public Friday, and school mask mandates are set to end March 31.

Molly Magarik, secretary of the Delaware Department of Health and Human Services, which includes the Division of Public Health, said that one reason masks will stay on in schools is to allow districts time to vaccinate more students before the masks come on.

She said that parents who were on the fence about vaccines may have chosen to rely on the protection of masking while watching how the pediatric vaccine rollout went.

Now, with millions of children vaccinated across the country, “the safety data is clear and with the mass mandate pending, this is really the perfect time, and we do urge everyone whose children have not yet been vaccinated, to please do so.”

That doesn’t mean all schools will drop their own local mask mandates, said Dr. Mark Holodick, the new secretary of the Delaware Department of Education.

He said he would need more than all his fingers and toes to count the meetings he had been in during just the last two weeks with school district superintendents and charter school officials about masks in schools.

“What I heard from those various leaders in particular … was we need a little bit of time to prepare for this time, so that our students, our families can make decisions around getting their children, our students vaccinated,” Holodick said.

Just because Carney has made a decision to lift the mask mandate, “doesn’t necessarily mean that every school district will lift or make the decision to lift a mandate in their own schools,” Holodick pointed out.

Districts will be considering things such as the vaccination rates in their own communities, Holodick said. 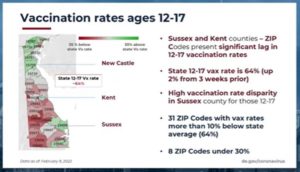 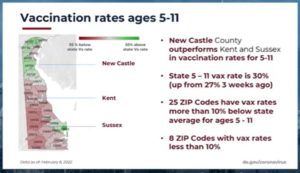 Magarik and Carney already had pointed to areas where the vaccination rates for children were a fraction of what they were elsewhere. Many of those were in western Kent and Sussex counties.

That could play a role in a district’s decision to keep or do away with masking rules to try to decrease the chances of the virus spreading in school, he said.

The vaccination rate also is lower for those from age 5 to 12 because they were just allowed in October to be vaccinated. It’s higher in ages 12 to 17 because they could get shots starting last summer.

Health officials had expected federal approval to have children under age 5 be vaccinated this winter, but that has been delayed.

At the end of the day, “we want to keep children safely in schools,” Holodick said. “That’s what this has been about and continues to be about. We believe that when children are in school around one another, in the most normalized climate and atmosphere possible, they thrive.”

He said the department has received a lot of messages about students’ social, emotional and mental health related to masks.

“I kind of flip that and say less about masks, more about opportunities that kids have missed out on in terms of being able to be around one another and hold the kind of activities that they otherwise would have,” he said. “So we have an opportunity here, if we really work collaboratively, to get this right come April 1.”

Margarik said the state will now shift to living with the COVID-19 virus.

While everyone hopes there won’t be any more variants like Delta, which was deadly, or Omicron, which was highly infectious, nobody can be sure, she said.

Health officials will continue to monitor the virus and people will know when a new variant is on the move.

“We’re going to have to figure out how to live with this virus,” she said. “We’re not going to go back to a time like we had in 2019 where we had never heard of this. The virus is with us. And frankly how each of us lives with the virus is going to be different. It’s going to depend on our age, our health status, our family’s situation.”

Families who have to worry about someone who is older, immunocompromised or has underlying conditions will likely react differently than people who do not, she said.

“And most importantly, our response is going to have to ebb and flow with the virus itself.”