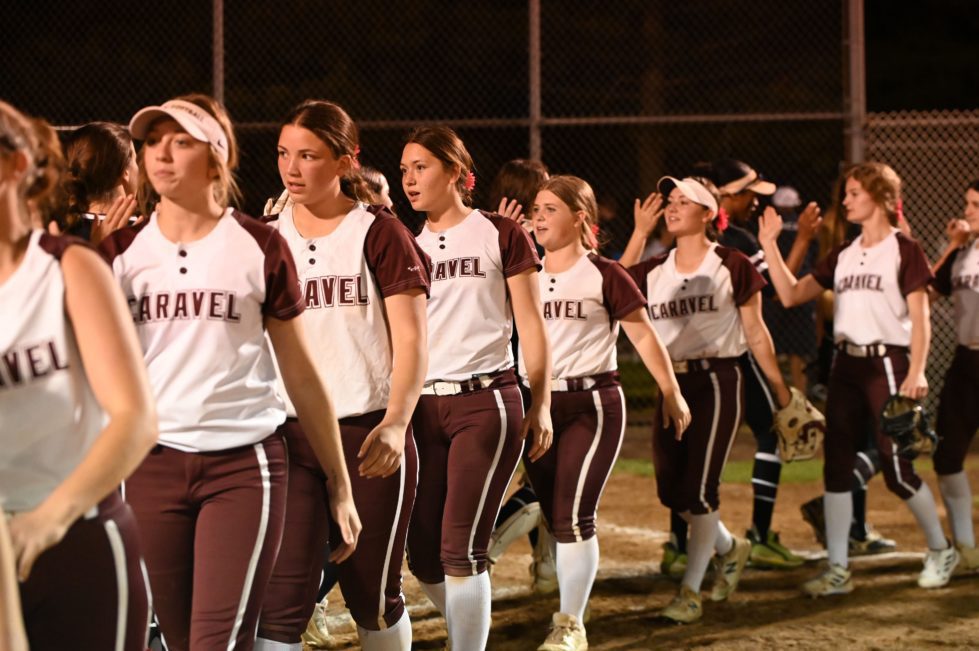 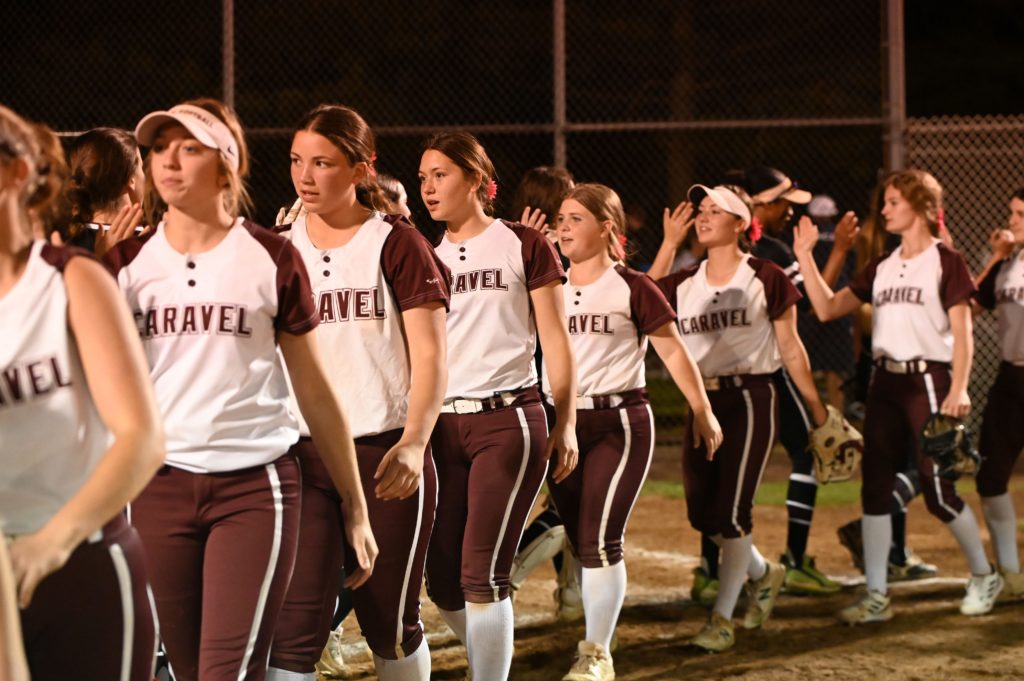 A late regular-season matchup of No. 1 ranked & unbeaten Appo at No. 2 and once-beaten Caravel turned out to be as advertised. A huge crowd lined the outfield on a perfect night, and witnessed a 10-8 win for the Buccaneers.

Caravel jumped out to an early lead, scoring twice in the 1st inning on 3 singles as Mikayla Walsh drove in both runs. In the 2nd frame, The Bucs’ Haley Grygo led off with a base hit. Appo pitcher Savannah Laird retired the next two batters, but Caravel’s next 5 batters reached base as Brooklyn Richardson tripled, Kendall Browne walked, Veronica Diomede doubled, followed by singles from Morgan Moxley and Brooke Holdsworth. After two innings Caravel was up by a score of 7-0 and pitcher Brooklyn Richardson allowed just two hits thru the 3rd.

The Jags finally broke thru in the top of the 4th when Hailey Watlington singled and Olivia Marinucci smashed a home run to deep center to get within five runs. However, Caravel answered in the bottom of the 4th when Browne doubled, Diomede tripled and scored on a “heads up” baserunning move. At the end of 4 innings the Bucs still had a seven run advantage at 9-2.

Appo strung together 4 hits in the 5th, scoring twice, thus cutting the deficit to 9-4. The very next inning, the Jags took advantage of Caravel miscues as Izzy Rodriquez, Brianna Russo, and Sky Eleazar all reached safely. All three scored as Laird walked, Alexia Fitzgerald hit a sacrifice fly and Julia Weglarz singled. Appo trailed 9-7 and was gaining momentum.

The Bucs opened the bottom of the 6th as Zayda Rocke drew a walk, and coach Randy Johnson inserted courtesy runner Leah Richardson. The 8th grader promptly stole 2nd and 3rd base, then scored on a hot shot by Diomede to go up 10-7.

Marinucci led off the 7th inning with a single and scored on two Caravel errors to again bring the Jags within 2 runs at 10-8. One out later, Rodriquez singled bringing the tying run to the plate in Russo, who hit a low line drive that was “snagged” by Moxley – who dove to the bag for a double play to end the game.

Caravel had 10 hits and committed 6 errors. Appo collected 9 hits and made two errors. Brooklyn Richardson was the winning pitcher with Kasey Xenidis going 4 innings to get the save. Kendall Browne went 2-3 and scored 3 runs while Diomede went 3-4 with a triple, doubl;e and single, also scoring three times. Appo’s Marinucci was 3-4 with the homer. With the win, Caravel improves to 11-1, while Appo lost for the 1st time this season and will carry a 14-1 record into the final week of play before the DIAA state tournament that is scheduled to begin May 17th.