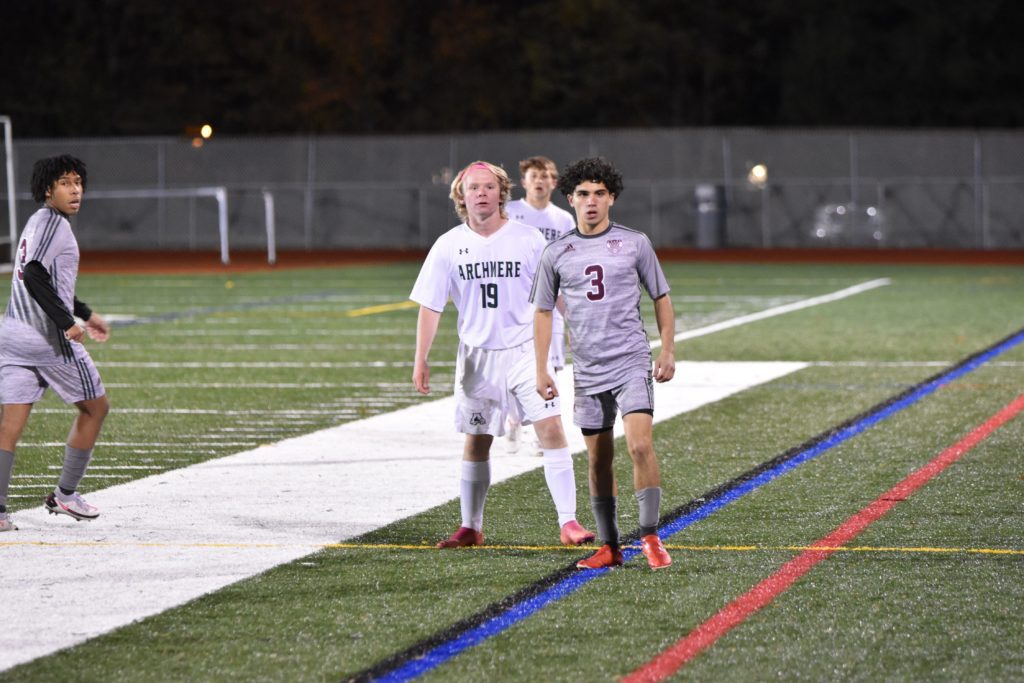 Archmere visited Caravel Saturday evening in the second round of the boys’ Division 2 soccer state tournament. After a cold first 10 min of the game being played in Archmere’s defensive third, the Buccaneers would eventually capitalize on their possession, scoring the first of two goals within 5 minutes of each other. Zayd Aktar would score the first goal off a well struck corner kick from his brother Zain.  Then, just 3 minutes later, Miles Hood blasted a free kick on the ground from 20 yards out sending the ball into the side netting as the Auks keeper dove to his left to no avail.

Archmere began to make a push late in the half but were unable to secure any real scoring chances as the Caravel defenders held their ground on a number of possible breakaway opportunities by the Auks. Then, with under two minutes to go in the half, Zayd Aktar would score his second goal of the half creating a great angle for a shot from about 12 yard out on the left side of the Archmere goal and sending it back across the Auks keeper into the side netting. Caravel led 3-0 going into halftime.

Twelve minutes into the 2nd half the Buccaneers struck again off another corner. Jacob Wojciechowski for the Buccaneers rose above the crowded 6-yard box to head the ball into the back of the net for their 4th goal of the contest. The match settled down at least from a scoring perspective as Caravel continued to mount attack after attack keeping the Auks defenders on their heels the entire half. Archmere on the other hand was unable to find any quality in their own offensive third of the field, turning the ball over before creating a shot on goal or any true scoring chances. The game ended 4-0 Caravel. The Buccaneers will now host Delmar Wednesday evening in a semi-final matchup.