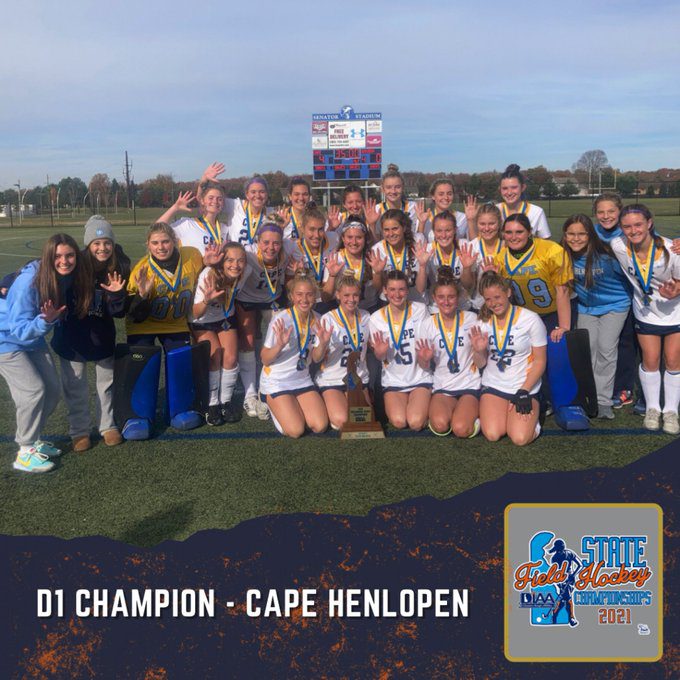 Photo courtesy of the DIAA

(Dover)  The Cape Henlopen Vikings fought off a “scrappy” Smyrna team to secure their 5th consecutive State Field Hockey Title in Division One with a 4-0 shutout. It was the 16th championship appearance for the Vikings, winning for the 12th time (the 10th since 2011).

A large crowd was in attendance at Dover High’s stadium to see Coach Kate “Windy” Austin record her 168th win since she took over the position in 2012. When asked, she was quick to point out, “It’s not about me…it’s about these athletes”.

Cape scored early in the first quarter when Reagan Ciabattoni scored at the 13:14 mark with an assist from LuLu Rishko. Then the Vikings added a goal with just :06 left as Rishko again assisted on Kelly Bragg’s goal that gave Cape a 2-0 lead after one quarter. Noelle Sabbagh extended the Cape advantage to 3-0 with 10:27 left in the half. The two teams played most of the 1st half between the 25’s as there were just three total “corners” in the opening 30 minutes of play.

Ciabattoni scored the only goal of the 2nd half with 4:46 to go in the 3rd quarter to make the final 4-0. Smyrna was making the programs first ever appearance in the championship game under 1st year head coach Loveita Moffett and the Eagles played well against a “seasoned” opponent.

Cape out-shot the Eagles 15-1 with Smyrna sophomore goalkeeper Halle Geiger making 11 saves. The Vikings ended up with an 11-2 advantage in penalty corners, getting 9 in the second half.

Smyrna finished the season with a very respectable record of 14-4, falling to Cape twice, Polytech & the Division-two champ Delmar.

Meanwhile, the Vikings completed a 17-2 season with their only losses coming to Delmar by scores of 2-1 in the Henlopen Conference Championship game & the regular season contest. Cape ended up outscoring the opposition 138-10 including 21-1 in the three tournament games.