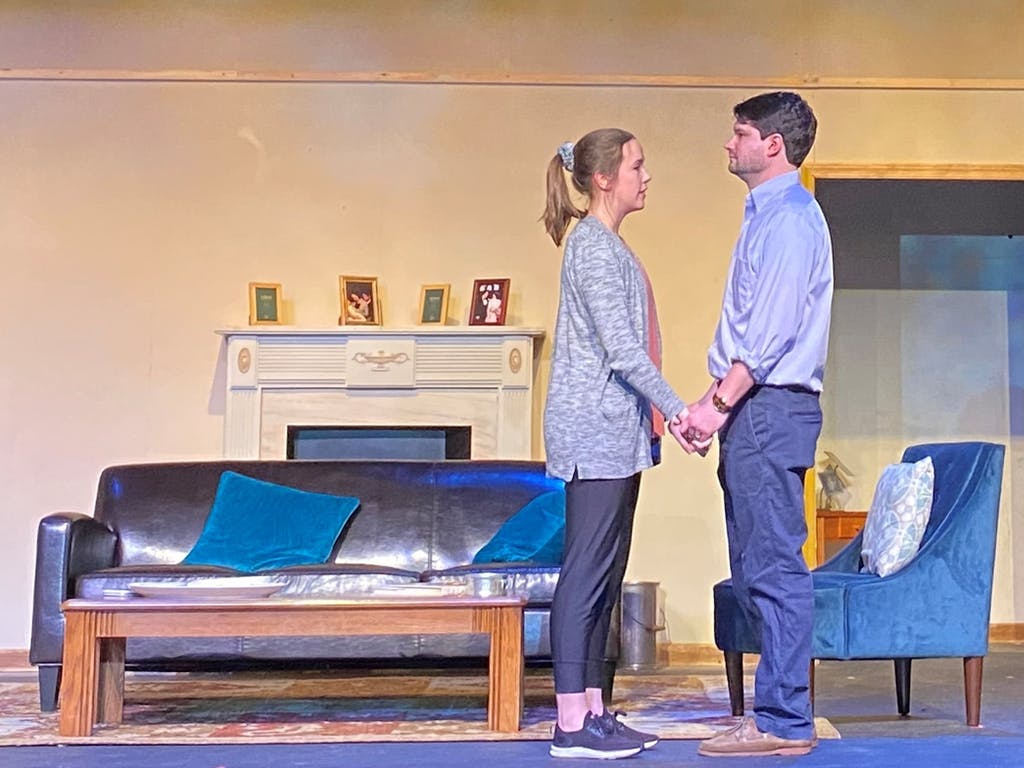 Hallie Hargus, left, rehearses her role as a new mom trying to decide whether to return to work, and Max Redman plays her cheating husband.

Candlelight Theater launches an in-person season Friday with a one-act play designed to let patrons, staff, actors and crew ease into live shows after a year of shutdowns caused by the COVID-19 pandemic.
“Clever Little Lies” will feature four actors who will be maskless on stage, but don their masks when they leave it.
State rules right now only allow 150 people at indoor performances. Candlelight will allow 50 audience members, who will sit at spaced-out tables.  The usual buffet is taking a hiatus, with servers bringing plated food to tables, but still allowing entree choices, seconds and desserts.
To further combat infection, the theater’s Ardentown barn has been treated with a long-term antimicrobial treatment and air purifiers are spaced throughout the theatre. The ventilation system uses HEPA filters, ionizers and ultraviolet technology to renew the air every 30 minutes, around the clock.
“We went a little slowly and soft, hoping we weren’t going to encounter the same as the couple other times we thought we might be able to open – surges, further science, re-evaluations,” said Candlelight’s Betsy Conner. “But away we go.”
Their audience seems ready to return.
While the show runs until May 23, Friday’s and Saturday night’s shows were sold out, and more than half of  Sunday’s show was, too. Tickets are $65.50 for adults and $33 for children.
“Clever Little Lies,” a comedy by Joe DiPietro — who also wrote “Memphis” and “I Love You, You’re Perfect, Now Change” — starts with a man confessing to his parents that he’s cheating on his wife, who just had their baby.
Candlelight Artistic Director Bob Kelly called it “a serio-comic look at how dishonesty requires constant attention as one lie begets a never ending series of deceptions.”
Its brevity and lack of an intermission was part of the play’s appeal, Kelly said.
“With a running time of approximately 1 hour and 20 minutes, it was felt that the play would be a safe re-introduction to live theater by limiting the amount of time you need to be indoors,”  he said.
Error, group does not exist! Check your syntax! (ID: 11)
Candlelight seems to be New Castle County’s sizable entertainment venue to offer indoor, in-person performances. Bootless Stageworks and House of Laffs have offered stand-up comedy shows.
The five-show season already is halfway sold out, Conner said. Shows will include “Beehive,”  June 12 – July 18; “Ain’t Misbehavin,'” July 31 to Aug. 29; a “Best of Candlelight” review, Sept. 18 – Oct. 31; and “A Christmas Carol By Candlelight,” Nov. 20 – Dec. 22, which is combination of act one of “A Christmas Carol” and act two of “Christmas by Candlelight” with a lot of sacred and secular music.
The theater survived its year-plus shutdown with a combination of grants, loans, donations, summer concerts and season pass holders making a gift of their tickets and passes. Even so, staff was laid off in August to help weather the storm.
This show makes the first time actress Hallie Hargus has been in a show since December 2019. She plays Jane, who thinks her biggest worry is trying to decide whether to return to work now that her baby is 3 months old.
While the show may sound pretty heavy for a return to theater in these trying times, Hargus said it’s definitely a comedy, although some people may fit it more comfortably into the dramedy role.
With a degree in musical theater from Northern Kentucky University, she made a living in theater until the pandemic struck and work dried up. Hargus has been working as an activities coordinator for a retirement home.
“I feel very fortunate to have been vaccinated through my job,” she said, “and so I feel pretty ready to go. As long as people are ready to come back and be part of our audience, I’m ready to see them.”
She’s not sure how she will feel opening night.
“Actually being in front of an audience will be a little surreal,” she said. “I might just have to wait and see until I really get an audience how that’s gonna be.”
All four actors are on stage without masks about half of the show, she said.
“We are able to leave our masks backstage so that during the play the audience will not, hopefully, be thinking about masks and coronavirus,” she said.
Doing a show while having a day job has been an interesting experience.
“This week, especially,” she said. “We’re doing all of our technical rehearsals. And those are just a little longer, a little more frequent, and I’m definitely feeling stretched in a few different directions.”
But she’s ready to be back on stage with an audience.
“We’re all very excited,” she said. “I’m thrilled just to get back in our little old barn in Arden and put it all together.”
For more information, go to Candlelight’s website.